Will zealots ignite another firestorm on the Temple Mount?

Prime Minister Benjamin Netanyahu hopes the Supreme Court will resolve the issue of Knesset members’ visiting the Temple Mount so he doesn't have to. 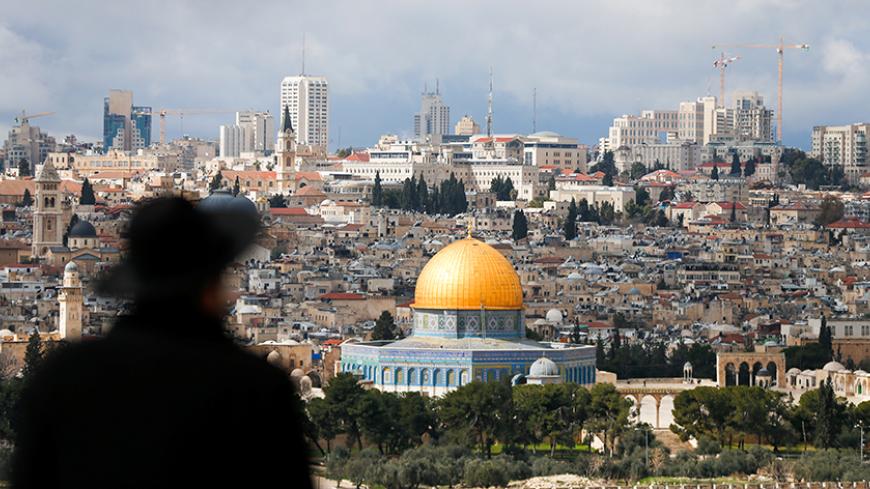 The Dome of the Rock sits in the compound known to Muslims as the Noble Sanctuary, or Haram al-Sharif, and to Jews as the Temple Mount, in Jerusalem's Old City, Feb. 15, 2017.

Israel’s Supreme Court should register an international patent in its name. It is the only institution in the world that serves simultaneously as a national punching bag and flak jacket.

For several years now, Israeli right-wing politicians have been attacking the court, trying to delegitimize it. More so, several weeks ago, center-left politicians dumped the controversial Regularization Law, which legalizes Israeli settlements built on private Palestinian land, at the door of the nation’s much-maligned top court, leaving it to the justices to deal with this hot potato. They hope the court will succeed where the Knesset failed and block it, declaring it unconstitutional. Now the country’s top court is being asked to douse a smoldering fire that right-wing politicos trying to hasten the Messiah’s appearance are threatening to reignite.

On March 28, Likud Knesset member Yehuda Glick petitioned the court to compel Prime Minister Benjamin Netanyahu to rescind a police order banning elected officials from the Temple Mount compound, or Haram al-Sharif, to Muslims. The site is home to the Dome of the Rock and Al-Aqsa Mosque and is believed to have been the location of the first and second Jewish temples in ancient times.

Glick pulled the petition out of his sleeve the day after Netanyahu decided to keep in place for the time being his October 2015 order preventing government ministers and Knesset members from entering the tinderbox. Having consulted with the heads of the country’s security forces, Netanyahu also said he would revisit the issue at the end of June, and, security considerations permitting, allow visits by politicians in accordance with police instructions. The delay is designed to get through the upcoming holy month of Ramadan, the Passover holiday and Jerusalem Day, all occasions of which Jewish and Muslim zealots are particularly fond.

It is hard to envision a change in the coming three months that alters the assessment currently in place determining that visits to the sacred site endanger security in Jerusalem and relations with Jordan, the custodian of the city’s Muslim holy sites. Right-wing Agriculture Minister Uri Ariel is a frequent visitor to the Temple Mount, and as far as anyone knows, he has not given up on his plan to take over the site. Four years ago he wrote, “With God’s help, within a decade we will be summing up the next decade from the heights of our Temple.” Unfortunately, one can assume that the elements and tensions that led to violent clashes between Arabs and Jews on the Temple Mount in September 2015 will still exist in June 2017.

There is also no hint whatsoever that in three months, or three years for that matter, Jordanian King Abdullah II will let Netanyahu wiggle out of his commitment made to the United States 18 months ago to enforce the status quo on the volatile plateau. At the start of a Cabinet meeting in October 2015, Netanyahu told reporters present, “In my conversations with Secretary of State John Kerry, I made clear that there is no change in the status quo, nor will there be a change. … The Temple Mount will continue to be run the way it is now. The visiting arrangements for Jews to the Temple Mount are being maintained [allowing them to visit but not to pray there]. There will be no change in them and in the prayer arrangements for Muslims.”

The Israeli right was forced to swallow what it considered a surrender to the Arabs. Although Kerry is now out of their way, that President Donald Trump has not made good on his campaign promise to move the US Embassy from Tel Aviv to Jerusalem could indicate that he is none too keen to play with fire on the Temple Mount either. It is also far from certain that Secretary of State Rex Tillerson is interested in filling Kerry’s shoes, running back and forth between Jerusalem and Amman every time some Jewish Israeli zealot is overcome by the desire to worship his god in the shadow of Al-Aqsa Mosque of all places.

Delaying the decision on politicians’ visits will help police control the plethora of parades, rallies and protests planned in Jerusalem for May 24 to mark the 50th anniversary of the city’s reunification, or depending on one's point of view, Israel’s occupation of it. What will change in three months? The mountain is not expected to move, and it is hard to believe that Glick will move from his position either.

On the one hand, the prime minister does not want to shake up Israel's delicate relationship with Jordan. In fall 2015, Netanyahu himself had confirmed to the Knesset’s Foreign Affairs and Defense Committee that there was a “period of tension and disconnect with Jordan” concerning the abovementioned clashes. He complained at the time that due to the confrontations, “Opportunities for cooperation with Arab states were halted.” That was because, he said, “the Arab street reacts first and foremost to the religious issue of Al-Aqsa Mosque, and only after that to the Israeli-Palestinian conflict.”

On the other hand, the police are unlikely to hand Netanyahu more rope to extend the ban on visits by Glick and his friends to the place that Netanyahu described in November 2014 as the “most sensitive kilometer on earth.” At the time, the prime minister asked his colleagues to show restraint and moderation, asserting, “This is always the case, but it is especially so now when the entire Middle East is awash in Islamic extremism. Just as important countries around us, important Arab countries, see eye to eye with Israel on the danger that extremist Islam poses to all of us.” These remarks will undoubtedly be just as relevant in three months.

At the start of a statement Netanyahu made Nov. 2, 2014, he wished a speedy recovery to Glick, who was fighting for his life after being badly wounded by a Palestinian gunman. Ironically, Glick is now the one threatening to return Netanyahu to the unhealthy Temple Mount morass, and there is no one around to save him. Shortly after Netanyahu’s decision to extend the Temple Mount ban became public, Glick wrote on Facebook, “Israel Police and the minister of public security have long since removed their objections to Knesset members visiting the Temple Mount.”

If Glick is right — and given his reputation as an honest politician, there is no reason to doubt his word — the Supreme Court may not be able to extricate Netanyahu from his dilemma. Former Chief Justice Aharon Barak, presiding over a 1993 panel debating the ban on Jewish prayer on the Temple Mount, ruled that the police must enforce Jews’ freedom of worship on the Temple Mount unless they determine themselves unable to protect the public interest in such an instance.

The Temple Mount is no longer a legal or a security issue. Resolving conflict over it, just like determining the fate of East Jerusalem, the West Bank and the Gaza Strip, requires first and foremost a political solution.