The struggle to be king of the Mount

Israel should be wary that events surrounding the Temple Mount are morphing into a battle between the northern branch of the Islamic Movement in Israel and Jordan. 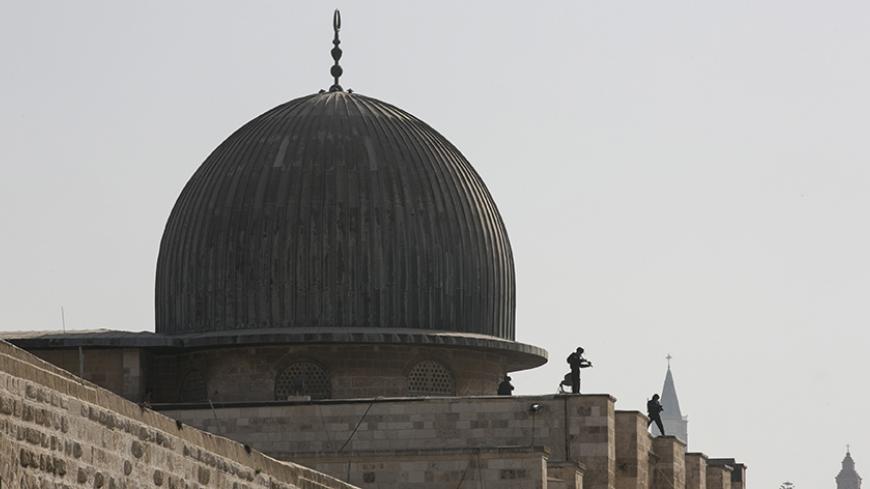 In Al-Monitor on Oct. 29, I quoted two prominent rabbis who advocate transforming the Temple Mount from an arena for stone throwing by Jews and Muslims into a center for world peace and prayer for all people. From conversations with Israeli, Arab and Western sources familiar with the controversy over the prayer arrangements on the Temple Mount, a more complex story emerges than the seemingly simple tug-of-war between Jewish zealots on one hand and Muslim zealots on the other. The protagonists in the story today are the Islamic Movement in Israel, the Palestinian Authority and the Hashemite Kingdom of Jordan. The Israelis are cast in a supporting role, as the fool on the (Temple) mountain.

The story is not entirely new. About 20 years ago, in September 1996 during the early days of the first Benjamin Netanyahu government, members of the northern branch of the Islamic Movement in Israel, headed by Raed Salah, then mayor of the Arab-Israeli town of Umm Al-Fahm, took control of the project to turn the area of Solomon’s Stables, a vaulted space under the southeastern corner of the Temple Mount, into an expansive mosque. In “The Wars of the Holy Places,” Shmuel Berkowitz called the effort a blatant and extremely substantive violation of the status quo on the Temple Mount and the biggest change effected there at least since the Crusades. In the past, struggles over the Temple Mount, the Haram al-Sharif to Muslims, had been between Jordan and the PA, but the conflict now also encompasses Jordan and the Islamic Movement at the very heart of the State of Israel.

In a Sept. 15 article in the Islamic Movement’s newsletter, Sawt al-Haq al-Hurriya (Voice of Truth and Freedom), Salah presented the movement’s strategy and his plan to lead Israeli Palestinians. He used the term “empowerment” (“tamhin,” in Arabic) and noted that he wanted to achieve his goal under the banner “Al-Aqsa is in danger.” To that end, he established the “mourabitoun” and the “mourabitat,” the twin organizations of men and women, respectively, who are now spearheading protests on the Temple Mount.

A senior Palestinian diplomatic source who requested anonymity told Al-Monitor a few days ago that Salah's campaign at the Al-Aqsa compound has been productive for the movement. Donations sent from mosques around the world are being used to pay for Israeli-issued fines and bail and legal fees for the Israeli Palestinians arrested in demonstrations at the compound. These funds also go toward organizing rallies and bus rentals to transport demonstrators from northern Israel to Jerusalem. Qatar is also providing funds to cover the legal and lawyer fees of demonstrators detained at the Al-Aqsa protests.

Salah’s arrest and 2010 conviction of leading a violent protest and assaulting a police officer and Israel's threat to outlaw the Islamic Movement’s northern branch for leading the “Al-Aqsa struggle” have boosted his and the movement's prestige among the Muslim public in general and Palestinians in particular. Lt. Col. Baruch Yedid, an expert on Palestinian issues, wrote on his Facebook page Oct. 29 that Salah’s official, public portrayal as protector of the Dome of the Rock exposes the weakness of the Hashemite monarch. The Israeli public hears the insults that the sheikh hurls at the Netanyahu government, while the Arab public reads the anti-Jordanian posters he disseminates, accusing Jordan of “betraying its duty” as the custodian of the holy places.

Yedid notes that Jordanian authorities and the country’s media insist that the storm over the Temple Mount should not be attributed to this or that movement, but is instead a spontaneous eruption. Regardless, photos of Muslim boys and girls “sacrificing their lives for Al-Aqsa” while the Jordanian flag flies at the entrance to the kingdom’s embassy in Ramat Gan erode Jordan’s standing in the Muslim world, a position that in any case is not particularly high. Various organizations in Jordan are demanding that King Abdullah recall the country's ambassador from Israel.

A senior diplomat in Israel told Al-Monitor that it is no coincidence that US Secretary of State John Kerry troubled himself to go all the way to Amman last month, on Oct. 24, for talks with Palestinian President Mahmoud Abbas about the Temple Mount situation. The brief visit to the Jordanian capital was also a gesture to Abdullah, designed to acknowledge Jordan’s guardianship of the Al-Aqsa compound. So too was the praise expressed by the guest for the king’s idea to install cameras across the site. On the following day, Oct. 25, Hamas launched a campaign criticizing the camera compromise, forcing the PA to express reservations about the plan. Hamas has adopted Salah's “Al-Aqsa is in danger” mantra. In his newsletter article, Salah had expressed his willingness to cooperate with “other streams” on this common denominator, a clear message to Hamas and other Islamist organizations.

The Muslim gatekeepers who regard themselves as “custodians of Al-Aqsa” have loyal partners — Jewish counterparts in the Temple Mount Faithful organization. Highly publicized visits to the Temple Mount by Israeli politicians, including Agriculture Minister Uri Ariel, and talk by Deputy Foreign Minister Tzipi Hotovely about dreams of flying the Israeli flag over the Temple Mount play into the hands of Salah and Hamas in their struggle against Jordan and the PA. Each photo of an Israeli minister or Knesset member praying against the backdrop of the the two mosques there is worth more to them than tens of thousands of words of incitement against Arab rulers. There is no better “proof” of their claim that Abdullah and Abbas are helpless in the face of what Salah touts as the “Jewish plot to take control of the holy mosques.”

The hero of this tragic tale is the acting police commissioner, Commander Bentzi Sau. In a Nov. 2 letter to Knesset Speaker Yuli Edelstein, Sau announced that he was temporarily banning Knesset members from the Temple Mount. In doing so, Sau validated Netanyahu’s decision to keep inflammatory public representatives away from the powder keg.

This is not the first time that the police have closed the Temple Mount to Jews to prevent bloody clashes between the inciters of the Temple Mount and the Al-Aqsa incited and vice versa. In August 1995, on the eve of Tisha Be’Av, the Jewish day of fasting to commemorate the destruction of the Jerusalem temples, police forbade Jews and Muslims from entering the compound. Then-Likud Chairman Netanyahu sharply criticized the Yitzhak Rabin government, which was trying to advance a peace agreement with the Palestinian national movement. Netanyahu said that with such a government, the Temple Mount was no longer in Israel's hands, a reference to the 1967 statement by Israel Defense Forces Chief of Staff Mordechai Gur, “The Temple Mount is in our hands.” With Netanyahu’s right-wing government​, which plays into the hands of the Islamic Movement, peace is slipping out of ours.