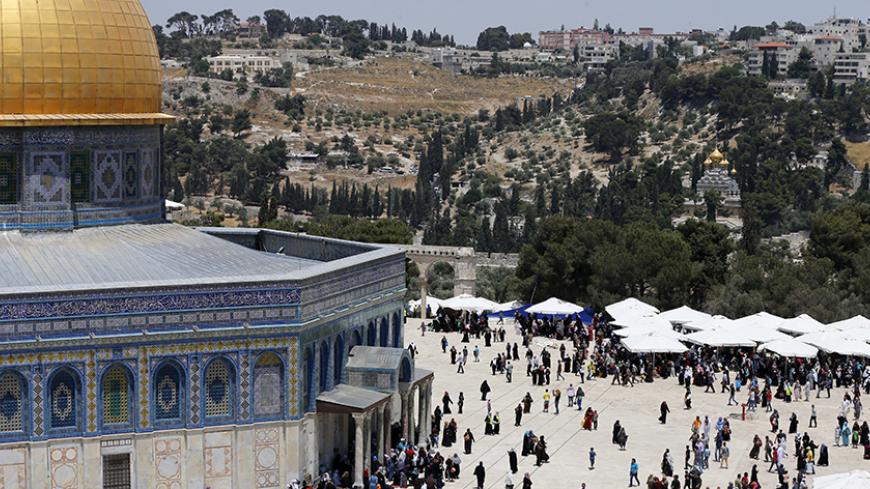 Palestinians walk near the Dome of the Rock at the compound known to Jews as the Temple Mount and to Muslims as Haram al-Sharif, in Jerusalem's Old City, July 3, 2015. - REUTERS/Ammar Awad

As riots spread across Jerusalem Sept. 16, I was invited to participate in a panel discussion on Al Jazeera’s "Inside Story." The title of the discussion was, “Can Netanyahu change Al Aqsa status quo?” There was no mention of the term "Temple Mount,” as the site is known to millions of Jewish believers and as it appears in Jewish ancient sacred sources. Also participating in the discussion was Ali Abunimah, founding partner and CEO of the Electronic Intifada website, which promotes the boycott, divestment and sanctions movement against Israel. Born in the United States (his father, Hassan Abunimah, a refugee from the 1948 war, served as Jordan’s ambassador to the United Nations) and an outspoken opponent of a two-state solution, Abunimah was speaking from the Al Jazeera studio in Amman. He got very passionate as he claimed that Israeli Prime Minister Benjamin Netanyahu is hiding behind various far-right groups, which are attempting to violate the status quo at the holy sites, demolish the mosques of Haram al-Sharif (the Muslim term for the Temple Mount compound) and build the third Jerusalem Temple on their ruins.

Abunimah’s comments brought back bitter memories. About 46 years ago, Arab and Muslim agitators claimed that the Israeli government was behind Denis Michael Rohan, an Australian with a mental disability, who claimed that he was following God’s direct instructions by setting fire to Al-Aqsa Mosque.

Then too, in August 1969, riots broke out in East Jerusalem and the West Bank — and across the Arab world — to protest what some Muslim activists called “the Zionist plot to rebuild the Temple.” There was a similar reaction 25 years ago, when the muezzin of Al-Aqsa called on worshippers participating in Friday services to use their bodies to block the laying of a cornerstone for the new Temple, at a ceremony planned by the Jewish Temple Mount Faithful extremist group. A similar call to action appeared in the Palestinian press. This incitement of the masses continued even after Israeli police officials informed the heads of the Waqf religious authority and the mosque that they had rejected the Temple Mount Faithful’s request for a permit to ascend the Temple Mount and that the group would not be allowed to arrive to the sacred compound.

In the riots that erupted on Oct. 8, 1990, 17 Muslims were killed. Another 200 Muslim demonstrators, 20 police officers and 9 Jewish worshippers were injured.

Ten years later, on Sept. 29, 2000, late Prime Minister Ariel Sharon, then leader of the opposition, and Reuven Rivlin, then a member of the Knesset and now president of Israel, decided to visit the Temple Mount. Muslim politicians and religious leaders turned this decision into the basis of a rumor that the Israeli government was planning to seize control of the mosques. “We asked the murderer Sharon to leave the sacred Al-Aqsa site,” declared Knesset member Abdulmalik Dehamsheh of the southern branch of the Islamic Movement. “We will take action to ensure that the Arab citizens of Israel join forces to save Al-Aqsa.”

Thirteen Israeli-Palestinian citizens and one Jew were killed in the riots that broke out in Israel following the highly publicized visit by those Jewish politicians to the sensitive site. These citizens were also unnecessary victims of political and religious wheeler-dealers, who knew how to pluck at the heartstrings of the faithful and had no qualms about playing with their very lives. Dehamsheh surely knew that the Supreme Court rejected a bevy of petitions to violate the status quo and eliminate restrictions on Jews' rights to access the Temple Mount and worship there. Just last year, the Knesset’s Research Division released a detailed account of these petitions, along with the court’s rulings. The document clearly states that "ever since 1967 the court is repeatedly asked to address the issue of Jews' right to ascend the Temple Mount, their right to pray there and to exercise religious ritual. All the petitions on that issue were rejected (part by a majority vote), and the court has accepted the position of the police on limiting access of Jews to the Temple Mount, and also on limiting the right of religious rituals at the compound.'' Since then, there has been no change in policy by the government or police.

Deceitful propaganda about an ostensible link between the Israeli right-wing government and far-right groups, which consider the mosques to be a thorn in their eyes, were accompanied by another phenomenon that can best be described as “the denial of Jewish history.” And so, during our discussion on Al Jazeera, Abunimah spoke about the special importance that Jerusalem has for Muslims and Christians. This forced me to remind the audience that the Jewish people also have close ties to Jerusalem, and even to the Temple Mount.

In his testimony before the Or Commission, which investigated the events of October 2000, the leader of the northern branch of the Islamic Movement in Israel, Sheikh Raed Salah, said that Sharon’s visit to the Temple Mount “was based on unfounded considerations and the false claim that Jews have rights at Al-Aqsa, because Al-Aqsa is the site where the prophet rose to Heaven. … It is like a guest entering your home. He is invited, so you pay him all due respect. If, however, the guest comes and seizes the guest room for himself, wouldn’t you throw him out of your house? In the same way, Al-Aqsa is sacred to God, and Sharon desecrated that sanctity.” According to Salah, it was Sharon’s desecration of the sacred site that led to the outbreak of the second intifada.

In a study published by the Floersheimer Institute for Policy Studies about the status of Haram al-Sharif in the Palestinian-Arab public discourse in Israel, professor Nimrod Luz emphasized that nowhere in Islamic tradition does anyone contest the fact that the Jewish Temple once stood on the site of the Dome of the Rock. The study explains the current denial of Jewish ties to Haram al-Sharif/Temple Mount by it simultaneously being a Palestinian and Israeli icon. The study goes on to say that traditions that fail to serve the creation of a Palestinian national identity are shunted aside (or consciously “forgotten”), which in turn contributes to the rejection of “the other.”

One expression of how Haram al-Sharif is being used in the wider context of the Zionist-Palestinian conflict can be found in Salah’s testimony before the commission that investigated the Temple Mount riots. He accused Israel of “all the acts of aggression, abuse and evil, starting with the expulsion [of the Palestinians], the destruction of villages, the reallocation of lands and the demolition of homes and holy sites of churches and mosques, as well as cemeteries.”

Those on the Palestinian side who instigate hysteria over the issue of the Temple Mount and those who rewrite history — denying Jewish connection to the place — excel at taking advantage of their extremist Jewish counterparts-twins. With their acts and deeds, those people “rebuilding the Jerusalem Temple,” raising red heifers so that they can renew the ancient sacrificial rite (according to Jewish tradition, red cow ashes are necessary for the purification rituals before entering the Temple) and just looking for ways to make the headlines are giving just cause to fear that the status quo at the sacred sites will be violated. The study by Luz presents changes to the prayer arrangements at the Cave of the Patriarchs in Hebron as a precedent for violations of this sort. In this context, Luz quotes Knesset member Ahmed Tibi as saying, in July 2002, “They threaten to lay the cornerstone for the Temple every Monday and Thursday, and [then] President Moshe Katzav suggests that an arrangement is reached there just like there is in the Haram al-Ibrahimi [Cave of the Patriarchs].'' Add to all that the image of a government minister praying with the mosque in the background, and let Qatari moneyed interests stir the pot, and you get your run-of-the-mill “Jerusalem mixed grill” (as the famous Jerusalem meat stew is called). Like always, it is the average person, Israeli and Palestinian alike, who will end up suffering the most for it.