Bennett walks back comment over Jews praying at Temple Mount

The office of Prime Minister Naftali Bennett said he had misspoken when saying that Jews and Muslim both have freedom to worship on Temple Mount. 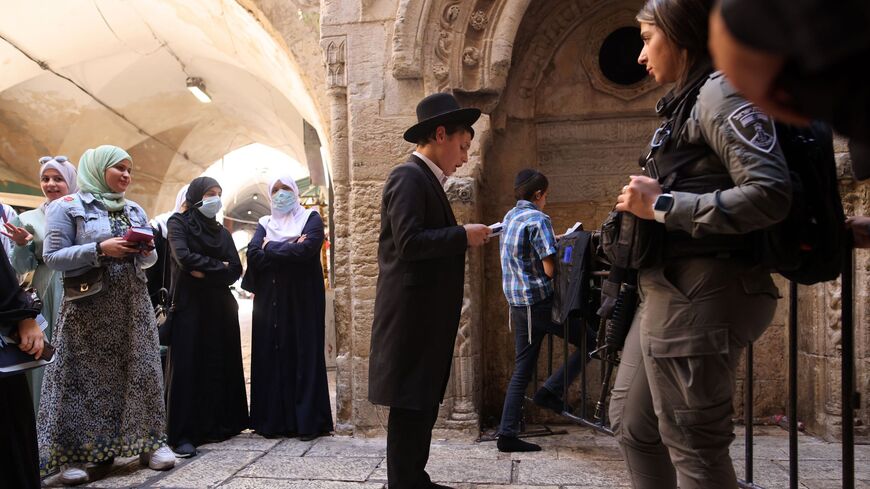 Ultra-Orthodox Jewish youths pray in front of a closure manned by Israeli security forces as a group of Palestinian women look on outside the al-Aqsa mosque compound in Jerusalem, during the annual Tisha B'Av (Ninth of Av) fasting and memorial day, commemorating the destruction of ancient Jewish temples some 2,000 years ago, on July 18, 2021. - AHMAD GHARABLI/AFP via Getty Images

The office of Prime Minister Naftali Bennett clarified this morning that Israel has not changed its policy of maintaining the status quo at Jerusalem’s flashpoint Temple Mount. A day earlier, Bennett had said during a radio interview that both Jews and Muslims have “freedom of worship” on the Temple Mount. The comment was widely interpreted as asserting the right of Jews to pray at the holy site. A tweet from Bennett’s office yesterday aggravated matters, stating, "Prime Minister Naftali Bennett spoke with Public Security Minister Bar-Lev and Israel Police Inspector General Shabtai and thanked them for managing the events on the Temple Mount with responsibility and consideration, while maintaining freedom of worship for Jews on the Mount."

This morning however, Bennett’s office clarified that he misspoke, and that he actually meant that both Jews and Muslims have “freedom of visitation rights” at the Temple Mount compound.

Since the 1967 Six-Day war, Israel has allowed the Jordanian Waqf to maintain religious authority at the Temple Mount compound. A compromise guideline enables Jews to ascend to the site on specific days and hours, separating Jewish worshipers visiting the compound from Muslims praying there. Jews are not allowed to pray there to avoid provoking the Muslim worshippers. Several right-wing Jewish activists have been detained in recent years for violating the rules. Over the years, rumors of Israeli intentions to change to the status quo have been met with strident opposition by the Muslim world and sparked deadly protests.

Bennett made his controversial comment during the Jewish fasting day of Tisha B’Av, which marks the destruction of both Jerusalem temples. The Temple Mount is considered the holiest site in Judaism and tens of thousands of Jews traditionally flock to Jerusalem’s Old City on that day. They come to pray by the Western Wall, located below the Temple Mount. The Israeli authorities usually allow more Jews than usual to visit the Temple Mount compound on the day of Tisha B’Av.

Early Sunday morning, Israel police clashed with dozens of Palestinian worshippers on the Temple Mount. They had barricaded themselves there ahead of the expected arrival of the Jewish visitors. Some of them threw stones at the police officers who entered the site, and the police responded with sponge-tipped bullets and other crowd-dispersal methods to clear the area.

Jordan, Egypt and Turkey denounced Israel yesterday following press reports that some 1,600 Jews had visited the Temple Mount in Jerusalem’s Old City to mark the fast of Tisha B’Av. The Jordanian Foreign Ministry issued a statement saying, “The Israeli actions against [Al-Aqsa] mosque are unacceptable and condemnable. They represent a violation of the historical and legal status quo, international law and Israel’s obligations as an occupying power in east Jerusalem.”

The Turkish Foreign Ministry said in a statement, “We condemn that this morning Israeli security forces have once again violated the sanctity of al-Haram al-Sharif by allowing racist Jewish groups to raid al-Aqsa Mosque, attacking Palestinian civilians praying in the area and detaining Palestinian civilians, including children and women, leading to images that offended human dignity.’’

The Islamist Ra’am Party, which is part of Bennett’s coalition, also condemned the ascent of what it called Jewish “settlers” to the Temple Mount. A statement issued jointly by the party and its parent Islamic Movement said, “The Al-Aqsa Mosque, in its 144 dunams, is solely the property of Muslims, and no one else has any right to it.”

Foreign Minister Yair Lapid affirmed today the government was not seeking to change the status quo on Temple Mount, saying, "Following my instructions, a message was issued to the Jordanians that there is no change in the status quo; the prime minister has also issued a clarification. We are talking about freedom of visitation and not freedom of worship. These are different things. I had a conversation with Internal Security Minister Omer Bar-Lev to make sure there is no change in security arrangements."