Why this Likud MK presents unique challenge to Netanyahu

Knesset member Yehuda Glick advocates for the right of Jews to pray at the Temple Mount, but at the same time he champions liberal values such as freedom of the press. 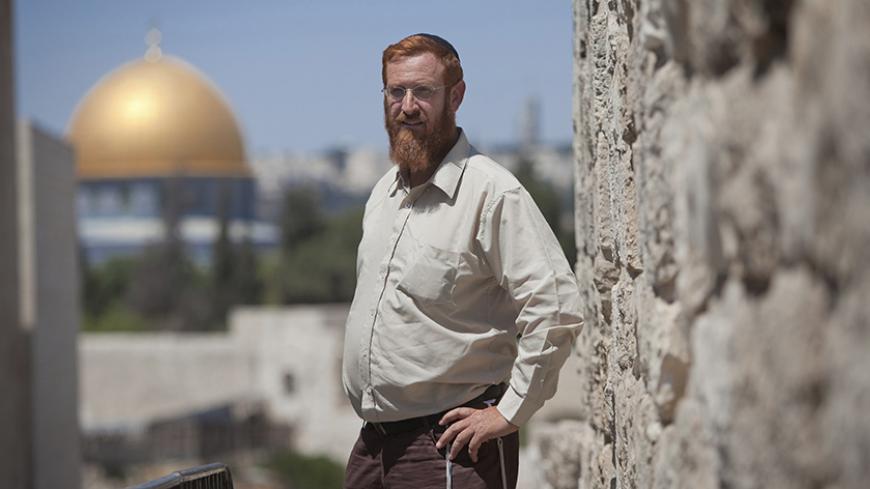 Member of Knesset Yehuda Glick, a representative of the Judea and Samaria (West Bank) region in the Likud, accepts with equanimity the cold shoulder he has received from Prime Minister Benjamin Netanyahu ever since he entered the Knesset in May 2016 to replace former Minister of Defense Moshe Ya'alon, who resigned. In an interview with Al-Monitor, Glick said that as of now all of his requests to meet with Netanyahu, even for a few minutes, have been automatically brushed off.

“Ever since I became a member of Knesset, Netanyahu refuses to meet with me, but I’m planted deep in the Likud. When I entered the Knesset, he didn’t want an association with me because ‘I ignite the Middle East,’ and now because I’m a leftist.”

This sentence expresses precisely the inherent complexity of the worldview of Glick, who attached his fate to the Temple Mount in his struggle to realize the rights of Jews to pray at the holy and volatile site. He stood at the head of the Fund for Temple Mount Heritage, and for many years caused a rather big headache for the police and security forces when he insisted on ascending the Temple Mount on different occasions, not necessarily in accordance with the status quo of the visiting schedule.

Glick almost paid with his life for this struggle when he was shot by an activist from Palestinian Islamic Jihad when exiting an annual conference of Temple Mount activists in Jerusalem in 2014. Glick was severely wounded but recovered and returned to public life and to his struggle to realize the right to pray at the Temple Mount. After he was sworn in as a member of Knesset, he was forced to refrain from praying in the site close to his heart due to the prohibition the prime minister placed last October on members of Knesset ascending to the Temple Mount, for fear of a conflagration.

Netanyahu does not like Glick’s involvement with the Temple Mount, to say the least. What’s confusing about Glick is the fact that alongside his belligerent battle that seems to many as the obsession of a “crazed settler” — Glick is a religious man who lives in the Otniel settlement in the south Hebron hills — he displays the liberal agenda of a leftist activist.

There are many examples from the last year: He spoke out against the “shooting soldier” from Hebron, Elor Azaria (convicted of manslaughter of a wounded Palestinian assailant), and called his conduct “horrifying”; he opposed the controversial muezzin law (limiting the hours of sounding the loudspeaker call for prayer) and explained that he actually enjoys the sound of the muezzin; he spoke out against the prime minister’s persecution of journalist Ilana Dayan; and last week he expressed harsh criticism of Netanyahu on his Twitter account regarding the crisis over the Public Broadcasting Corporation, which almost led to an election.

“I am very liberal and support a completely free press, but with everything that’s happened with the corporation, I’ll ask for clarification before I vote for the new law,” he told Al-Monitor following the compromise reached by Netanyahu and Finance Minister Moshe Kahlon that the news department will be run by the staff of the Israel Broadcasting Authority. In light of his intellectual independence, it’s clear why he and the chairman of the coalition, member of Knesset David Bitan, are on a constant collision course.

Glick is a complicated, different and confusing character in the Knesset, which is controlled mostly by populist and simplistic black-and-white politics. He is never tempestuous and never coarse, in contrast with the belligerence that characterizes quite a few members of Knesset in the ruling party. All this also paradoxically turns him into a favorite of the left, and he is sometimes described as the sanest figure in the Likud, from which he doesn’t spare criticism: “When an entity is aggressive, it doesn’t make it more powerful. Thus, in my view, a party that tries to forcefully prevent a conference of [anti-occupation nongovernmental organization] Breaking the Silence or that works to revoke the citizenship of the director of [human rights group] B’Tselem because he spoke against Israel at the United Nations — is a weak party. But a party that allows itself to be generous and let the other express himself is a stronger entity,” he said.

This duality accompanies Glick at any given moment. On the one hand he’s a liberal and has close relationships and friendships with Arabs, and on the other hand, he’s a settler who believes in a full annexation of West Bank territories to the State of Israel and in granting full citizenship status to Palestinians.

When Glick is asked how his liberalism accords with the idea of annexation, he responds, “When I ask myself under what rule I would prefer to live as a Palestinian citizen — a third-world state that denies human rights or a democratic state where women aren’t oppressed and homosexuals have full human rights — the answer is clear. When I speak with them, they quietly tell me that the last thing they want is to live in a Palestinian state.

Glick’s plan includes a referendum (under international observation) among Palestinians that asks whether they accept full annexation of the West Bank to Israel in exchange for full Israeli citizenship. According to Glick, “I trust 100% that that is what they want. It’s clear to me that they don’t want to be buried under the corrupt Palestinian rule.”

On March 29 he once again acted independently when he petitioned the high court against the prime minister in a request to cancel the prohibition on members of Knesset entering the Temple Mount, with the argument that it’s an unprecedented phenomenon. While members of Knesset are withheld that right, any citizen, resident or tourist is allowed to enter the Temple Mount without limitations.

“I don’t accept the argument that the Temple Mount is a volatile place, because reality there is the opposite,” he said after his petition was denied. “It’s a fact that in the last year, after they removed problematic people, there was a record number of Jews who entered the Temple Mount and it’s quiet there. I believe we can turn the place to a global place of tolerance and reconciliation. There’s no reason that people of all three faiths won’t pray there with mutual respect. When I see a Muslim praying on the Temple Mount it makes me happier than anything,” Glick declared. He explained that in his view the right to pray on the Temple Mount belongs to everyone, “just as I fought for the right of women to pray [at the Western Wall].”