In an interview with Al-Monitor, Knesset member Orit Strock blames the government for not clarifying long ago its stance concerning control of the Temple Mount, saying that this indecisiveness permitted the attack on rightist activist Rabbi Yehuda Glick. 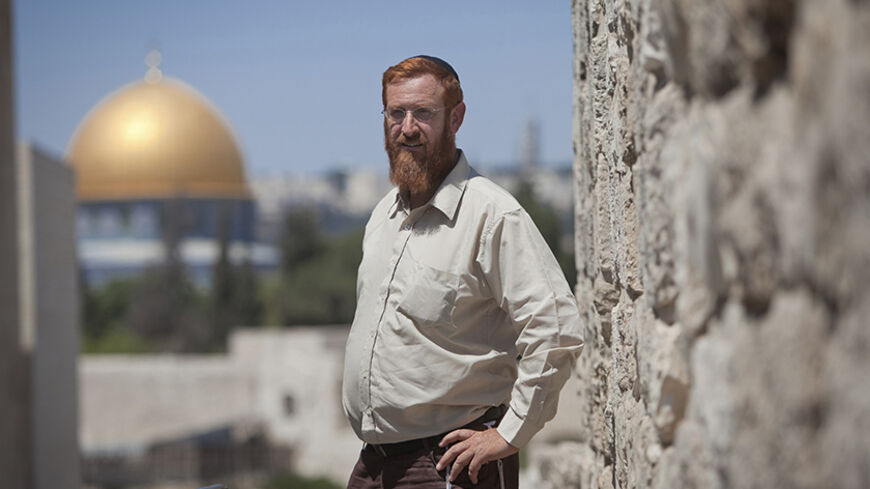 Yehuda Glick, an activist of the Temple Mount Faithful group, stands in Jerusalem, June 30, 2011. Glick was shot and severely wounded in Jerusalem on Oct. 29 as he left a conference promoting a campaign to permit Jewish prayer on the Temple Mount. - REUTERS/Emil Salman

Knesset member Orit Strock of the HaBayit HaYehudi Party was at home in the Avraham Avinu (Abraham the patriarch) neighborhood of Hebron the night of Oct. 29 when she first heard the news about the assassination attempt against Yehuda Glick, a leading advocate of the right of Jews to ascend to the Temple Mount. The person to break the story to her was from her party, Knesset member Shuli Mualem. Mualem had been participating in a right-wing conference at the Menachem Begin Heritage Center in Jerusalem. Glick was shot at close range at the end of the conference titled “Israel Returns to the Temple Mount.” Mualem then called Strock to tell her the news.

Like all Knesset members on the right, the two women know Glick personally and were intimately familiar with his struggle to allow Jews to visit the Temple Mount. They spent the first few moments of their conversation sharing their shock and personal pain, instead of just focusing on the potentially volatile incident’s immediate political and security implications. Glick was the person most closely identified with the Jewish struggle over the controversial compound. It was his life’s work, and the activist from the settlement of Othniel in southern Mount Hebron was a familiar figure in the corridors of the Knesset.

Strock, a leader of the Jewish settler community in Hebron, is most closely identified with religious-national struggles that some people describe as “messianic.” In the Knesset she co-chairs the Land of Israel Lobby with Knesset member Yariv Levin of the Likud. In 2013, it seemed as if Prime Minister Benjamin Netanyahu and the minister responsible for negotiations with the Palestinians, Tzipi Livni, were making progress on the diplomatic track. The lobby’s goal was to interfere with the coalition’s activities should the negotiations reach a decisive point.

Plenty of water has flowed down the Jordan River since. The negotiations broke down, and another round of fighting against Hamas erupted in the Gaza Strip during the summer. Now that violence between Jews and Arabs is escalating in Jerusalem, Strock is once again swamped with her old/new battles. “This attack was the crudest poke in the eye imaginable against Jewish sovereignty in Jerusalem,” she said Oct. 30 in an interview with Al-Monitor the morning after the assassination attempt. “At this difficult moment, it is incumbent upon us to make a decision. We must make it clear that we have sovereignty over Jerusalem.”

Al-Monitor:  Don’t you think that this morning’s demand from the right that the Temple Mount be opened to Jews could ignite the entire region?

Strock:  First of all, we have to understand what exactly happened here, and what the reasons for it were. This attack is the result of long-standing stuttering on our part over the Temple Mount. Its goal was to banish the Jews from the site. The issue of our sovereignty over Jerusalem has reached the point where a decision must be made. Do we want a united Jerusalem? The answer is yes, which means that Israeli police must be stationed in East Jerusalem too. There must be law and order there, and the Temple Mount must be open to everyone. A situation in which there is some type of foreign sovereignty over the Temple Mount is untenable. [Officially, the compound is run by the Jordanian Office of the Waqf.] The terrorists who have been rioting and killing people in Jerusalem over the past few months — including the most recent terrorist who tried to assassinate Yehuda Glick — must receive a decisive answer from Israel. We must make it absolutely clear that we will build everywhere in the city, because Jerusalem is our capital. At the same time, we must also make it clear that our governing authorities in Jerusalem will be situated everywhere. Jews must be granted the right to go up to the Temple Mount just as Muslims have that right. That’s not explosive. I live in Hebron, and in Hebron as well Jews and Arabs pray.

Al-Monitor:  Your party, HaBayit HaYehudi, is part of the government. Will you take any moves from within the government to achieve these objectives?

Strock:  Of course. I worry that if we continue to make concessions in Jerusalem, we will not be able to continue ruling over the city. After all, last night’s attack took place right in the heart of Jerusalem — spitting distance from the city’s bustling business center. I am very concerned that what happened will lead to a total loss of control. That is why we must make an unequivocal statement. We must declare that we plan on being in Jerusalem forever. I think back at what Mayor Rudy Giuliani did in New York. Prime Minister Benjamin Netanyahu, Jerusalem Mayor Nir Barkat and Minister of Internal Security Yitzhak Aharonovich must do the same thing. There must be law and order here for everyone, and Israeli police must be stationed everywhere throughout the city.

Al-Monitor:  Israel is in a very sensitive position internationally. Relations with the United States are tense. Don’t you think that the government should consider these aspects of the situation?

Strock:  The terrorist who tried to kill Yehuda [Glick] spent 10 years in jail. Once he was released, it took two years before he launched another attack. We must ask ourselves: What causes a person like that to repeat an action, which will end up putting him back in prison? My answer is simple. It is [Palestinian President] Mahmoud Abbas’ terror bank. In other words, the salary that a murderous terrorist receives from the Palestinian Authority is 12,000 Israeli shekels per month [about $3,000], as opposed to the 2,700 shekels [some $700] a Palestinian policeman receives. What this means is that Abbas has made terrorism into a business that pays well. Money is one of the factors that accelerate terrorism here. These sums are determined through decisions made by the Palestinian government. I don’t know whether the United Nations is aware that Palestinian terrorists, regardless of what organization they belong to, receive those kinds of sums. I dealt with the issue quite a bit after the kidnapping of the three boys [June 12]. The terrorists received their salaries one month after the kidnapping. HaBayit HaYehudi Party demanded that this flow of money be stopped.

Al-Monitor:  Your party is in the government. Naftali Bennett, the head of your party, is a member of the Cabinet. How will you act from now on?

Strock:   We will spearhead a process that will put a halt to the transfer of these funds, in the same way that we acted successfully after the kidnapping of the three boys. We will demand that the murderers be returned to prison, and we will not allow this carnival to continue. After the abduction, we demanded that the murderers released in the Shalit deal be sent back to prison. And indeed, this demand was adopted and arrests were made. These are hardly complicated actions. No legislation is necessary. These are Cabinet decisions, and we can easily create a consensus around them again. We’ve been talking about it within our party since yesterday. That is the overall mood as well. Just this morning I heard Knesset members from the Likud Party saying similar things. People open their eyes when they see something as shocking as this. We say: “Treat Jerusalem as if it were Tel Aviv.” Unfortunately, in this particular instance, the Shin Bet and the police didn’t take the threats against Yehuda Glick seriously.