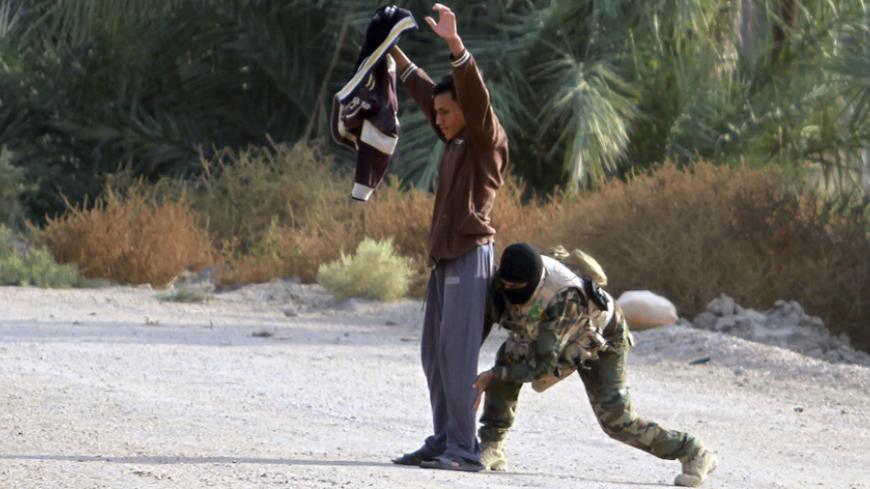 The prospects of a new Iraqi Sunni “awakening” to combat the Islamic State (IS) are being stifled by the terrorist group’s brutal and effective intelligence operation, according to Ali Mamouri.

Mamouri writes from Iraq: "The Islamic State differs from its predecessors and similar groups by running a powerful intelligence apparatus that is strong and has plenty of security experience acquired by intelligence officers from the previous regime. The IS intelligence apparatus carries out various types of operations, similar to other intelligence apparatuses around the world. One of its most important operations is to monitor and identify its opponents, to eliminate them immediately and to avoid the possibility of the Iraqi government, and other local and regional opposing parties, to infiltrate its intelligence apparatus, or a military opposition to emerge on its territory.”

IS may be learning and adapting based on the experience of its predecessor, al-Qaeda in Iraq, which lost ground to an alliance between US military forces and Iraqi Sunni tribes — also known as the Awakening movement — during the US troop "surge" in Iraq in 2007.

Mamouri writes: “The terror prevailing over Mosul has led an enormous number of residents to flee and take refuge in Shiite-dominated western regions. Al-Monitor witnessed long lines of refugees at the entrance to the city of Karbala, waiting for security clearance to enter the city. These procedures can take days due to the large number of refugees and the lack of facilities to receive them.”

An Al-Monitor correspondent in Syria reports that Alawite residents are seeking a new accountability from the Syrian government in its conduct of the war.

“In Syria, both pro- and anti-regime citizens are equally devastated by the war. We can say that the Alawites’ protests against the regime mainly stem from its mismanagement of the war. Others' protests center on demands stirred by the price increases and economic deterioration. The regime has managed until now to control these protests and avoid their escalation, as the photos of Assad and slogans supporting him in the streets of Latakia and Tartus show.

“In Latakia, life seems normal in the markets and on the roads, except for the presence of dozens of armed men affiliated with the army and the National Defense Forces. … The pro-regime militants in the city streets, especially at the entrance of the mostly Sunni neighborhoods, which have already witnessed clashes and protests, are intimidating. Sand barricades can still be seen at the entrances of the streets leading to the neighborhoods of Al Ramel al-Janoubi, Qnaines and al-Sakantouri. The regime, with the support of its advocates, is still tightening the noose on the city. … The pro-regime citizens in Tartus also seem angry. Everyone in the city is talking about the fuel price hike and the subsequent increase in the prices of products, while the minimum wage is still the same.”

Khaled Attalah reports that the Syrian army’s victory over al-Qaeda-linked Jabhat al-Nusra and Hazm Movement forces in Murak, a town in the Hama countryside, may be a prelude to a decisive battle for Aleppo.

Attalah reports from Murak: “The government forces’ control over Murak, 30 kilometers (19 miles) north of Hama, is part of Syrian President Bashar al-Assad's strategy to slowly advance within geographically overlapping regions. It is an expansion of previous victories, accomplished after the recent advance in Aleppo’s countryside and control over Halfaya, a town 25 kilometers (15.5 miles) northwest of Hama. This opens the door for new clashes with opposition fighters in the north, especially since the countryside outside the cities represents one continuous line in the battles.”

A Syrian government victory in Aleppo would come at the expense of the Western-backed moderate opposition forces, which are barely hanging on despite a boost in support since the US-led coalition began operations against IS.

“It seems that the Syrian army was able to open new fronts that it was not capable of reaching before. If it achieves its objective of reaching Aleppo’s countryside and opening supply lines to the north, the opposition would be in big trouble, with the Islamic State on the one hand, and with the Syrian army on the other. However, the element of surprise is the real decision-maker here, especially after the opposition received new weapons supplies shortly after the international war against IS started,” Attalah writes.

The assassination attempt against Yehuda Glick, an advocate for the right of Jews to ascend and pray on the Temple Mount, by Moataz Hijazi on Oct. 29 has sparked fears of an even further escalation of violence in Jerusalem.

Al-Monitor has closely covered the confrontations around the Temple Mount as a dangerous flash point in Israeli-Palestinian confrontations.

Ahmed Melhem reports that demonstrations by Palestinian youths in Jerusalem have intensified since the revenge killing of Mohammed Abu Khdeir on July 2 by Israeli extremists, which occurred after the kidnapping and murder of three Israeli boys by those reportedly linked to a Hamas affiliate.

Melhem writes that although the protests have the potential to grow even more, so far the “confrontations are spontaneous and lack national leadership, which raises questions about the possibility of their continuity in light of the security grip imposed by Israeli forces.”

Some Israeli politicians argue there should be no restrictions for Jews to access the Temple Mount, which is also home to the Al-Aqsa Mosque, one of Islam’s holiest sites. Knesset member Orit Strock of the HaBayit HaYehudi Party, a friend of Glick, told Mazal Mualem, “We must make it absolutely clear that we will build everywhere in the city, because Jerusalem is our capital. At the same time, we must also make it clear that our governing authorities in Jerusalem will be situated everywhere. Jews must be granted the right to go up to the Temple Mount just as Muslims have that right. That’s not explosive. I live in Hebron, and in Hebron as well Jews and Arabs pray.”

In light of the attack on Glick, Ben Caspit writes: “Anyone who finds relative quiet in the Middle East to be important should pray for Glick’s speedy recovery. If the murder attempt had succeeded, all of us here and around Jerusalem would have seen a spectacular shortcut to hell. A Jewish terrorist attack on the Temple Mount has always been the Shin Bet’s worst nightmare. The most common commodity in the Middle East is extremism. It is found in abundance on both sides, yet the brakes that should restrain it are wearing thin.”

Egypt has demolished buildings in Rafah, an Egyptian town in the northern part of the Sinai Peninsula on the border with the Gaza Strip, displacing thousands of residents, after a terrorist attack Oct. 24 that killed at least 30 Egyptian soldiers.

Egypt has blamed the killings on terrorist groups that may have links to Hamas.

Mohammed Othman reports from Rafah, on the Gaza side of the border: “Gaza’s border crossing to Egypt has become like a gun pointed at Gazans. Its closing recurs throughout the year, sometimes under the pretext of Egyptian national security and other times due to Palestinian divisions and Hamas’ control over Gaza. As a result, it has become a card that Egyptians play whenever they want to put pressure on Gaza’s inhabitants, and it is adding to Gazans’ suffering, especially with the tight Israeli blockade.”