Labor Party Knesset member Hilik Bar, champion of the two-state solution, retracted his bill designed to organize prayer time slots for both Jews and Muslims on Temple Mount, after harsh reactions from both the Jordanian monarchy and the Shin Bet. 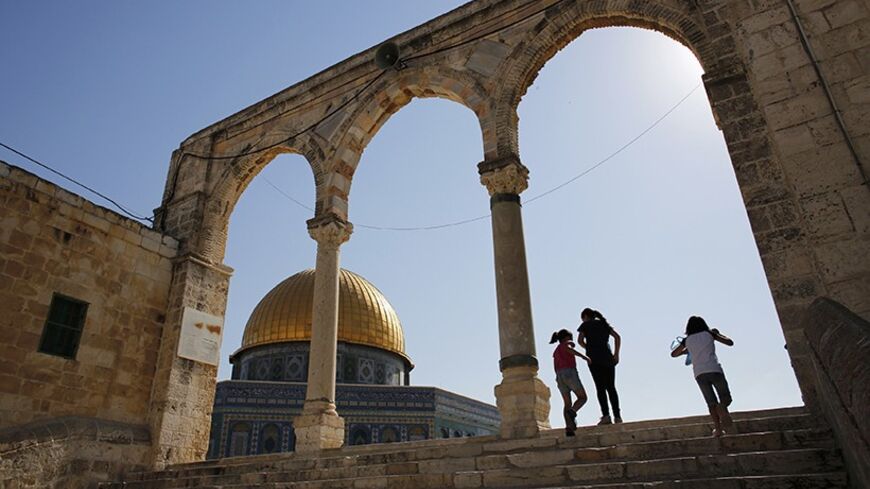 Girls walk up stairs near the Dome of the Rock on a compound revered by Jews as the Temple Mount and by Muslims as the Noble Sanctuary, in Jerusalem's Old City, June 23, 2013. - REUTERS/Darren Whiteside

When Labor Party Knesset member Yehiel (Hilik) Bar joined Likud Knesset member Miri Regev in sponsoring a bill granting freedom of movement, religion and worship on the Temple Mount to Jews and Arabs alike, he knew the initiative would not pass quietly. But it seems he underestimated its explosiveness and the extent of the commotion it would cause. The fuss did not die down even after he decided to draw back his support from the proposed legislation. It will likely require the intervention of Prime Minister Benjamin Netanyahu.

The storm, with the Jordanian monarchy one of its many eyes, erupted the morning of May 18 following a report of the proposed bill in the Israeli daily Yedioth Ahronoth. Bar explained that he was proud to introduce such a bill, aimed at enabling Jews to exercise their freedom of worship at the holy site, which is limited nowadays. “I believe that the co-existence of Jews and Arabs begins with full equality on the Temple Mount, as well,” he said. By the way, a similar bill proposal was introduced in the past by right-wing members of the Knesset.

Whereas Regev’s involvement in the current bill proposal is viewed as natural, Bar, a moderate left-winger, became almost immediately the target of attacks by Arab Knesset members and by the left in general.

Bar’s and Regev’s political views are very far apart. Whereas she is close to the ultra right-wing circles in the Likud, he heads the caucus that seeks to promote a solution to the Israeli-Palestinian and Israeli-Arab conflict. Bar, who is secretary-general of the Labor Party, has positioned himself as one of the leaders of the struggle for implementation of the two-state vision, and has good ties with senior officials in the Palestinian Authority (PA). Recently, he even initiated a meeting in Ramallah of left-wing Knesset members with PA Chairman Mahmoud Abbas.

As soon as the report of the proposed bill surfaced, the pressure campaign began. Bar was forced to cancel his scheduled meetings and devoted himself to a series of long and interminable consultations. First came the phone calls from senior Jordanian officials, who sought explanations from him and Isaac Herzog, the Labor Party chairman and Knesset member. Herzog met just recently in Jordan with King Abdullah, and undertook everything possible to preserve the kingdom’s interests on the Temple Mount. Herzog was under the impression then that the Jordanians were very concerned about provocations and any violation of the status quo at the holy site.

At the same time, Bar got calls from senior Shin Bet officials who warned that his proposed bill could result in riots, which in a best case scenario would resemble those of the second intifada. And worst case? This they left to his imagination.

The following day, when he got to the Knesset, the Arab Knesset members came up to him and warned against setting the region on fire. This was followed by an expected conversation with Herzog, who said that he understood Bar was well-intentioned, but the proposed legislation embarrassed the party and could have severe regional consequences.

“I gave my word to the king of Jordan that I would safeguard their interests, and this proposed bill does not sit well with my commitment. It’s too bad you didn’t consult with me,” Herzog told Bar, asking him to withdraw his support for the bill. At the same time, heavy pressure was exerted on Bar from the right to prevent him from running scared and changing his mind.

Bar felt torn. He understood that he, of all people, who was leading the fight for an agreement with the Palestinians, could become part of an unnecessary diplomatic crisis. Yet, as a Jerusalemite who had served in the past as deputy mayor, he knew full well the importance of freedom of worship for Jews on the Temple Mount.

When I stood next to Bar at the Knesset on May 19, Knesset member Ahmad Tibi walked by and let slip: “You’re nuts. You’ll set the region on fire.” Bar remained pensive. Knesset member Issawi Frej of the Meretz Party was quoted on various news sites accusing Bar of dangerous populism.

In a May 20 conversation with Al-Monitor, as he was still debating the issue, Bar said that if he comes to believe that the proposed bill was a mistake at this time, he would have no trouble climbing down from the tree. The following day he did just that.

In a detailed announcement to the media, Bar said he was suspending his support for the bill, “not with any joy or glee,” following “a round of extensive consultations with senior security people, with politicians and diplomats in Israel and abroad, and in joint consultation with party chairman Herzog and faction leader Eitan Cabel.” Bar stressed that the love and affinity for religion and tradition, for national values and Jerusalem, were not the sole property of the right, and he would continue to work for freedom of worship and coexistence between Jews, Muslims and Christians. “I believe the day will come when Jews and Muslims will pray together with mutual consent on the Temple Mount, too. It appears that today is not yet that day and perhaps legislation is not the answer,” he summed up.

Before withdrawing his support for the bill, Bar told Al-Monitor: “I made it clear in advance that I would not lend a hand to anything that hurts the feelings of the Muslims or disturbs their hours of prayer on the Temple Mount. As far as I was concerned, this was an ironclad rule. After all, I fight all the time so that there’s a diplomatic process. If we are destined to live together in the Middle East, we must sort out as many issues as possible. Equal prayer times at the Tomb of the Patriarchs [in Hebron] work well, so why shouldn’t this happen on the Temple Mount?”

Al-Monitor:  And since it was reported, did you learn anything new?

Bar:  This proposed bill is in very early stages, so there is no problem walking away from it. I spoke to senior Shin Bet officials, I spoke with Arab Knesset members and Jordanian diplomats. It’s clear that they did not expect me to take part in this bill proposal. I understand from them that the very fact that the bill supposedly imposes on them certain prayer arrangements is problematic and hurtful. By the way, I also received calls from Labor people who backed me and said the party should return to national values.

Al-Monitor:  Are you not deterred by the dire security forecasts?

Bar:  One has to consider this, of course, and that’s what I’m doing. I’m not obtuse when I’m told that this is a powder keg. I have no desire to bring about a rift with Jordan or to set the region on fire. I came well-intentioned, wanting to create a joint practice of prayer. My idea was to create legislation in the spirit of Justice Dorit Beinisch, who ruled that Jews must not be prevented from going up to the Temple Mount, and her ruling did not provoke a world war. When I approached Miri Regev I told her: "If you’re doing this for the noise and provocation, I’m not on board. If this is meant to achieve historic change, I’m interested." I became convinced that this was her intention.

Israel Hasson, Knesset member of the Kadima Party and former Shin Bet deputy director, said, “I don’t know what Bar and Regev were trying to do, and what they did stems from a lack of understanding of the issue, in my view. This is, of course, dangerous.” Hasson also told Al-Monitor, “The Temple Mount is the brain stem, by any definition. It is considered an all pan-Arab element, and even at Camp David in 2000 [former Egyptian President Hosni] Mubarak made clear to [former Prime Minister] Ehud Barak that [the late PLO leader] Yasser Arafat has no right to conduct negotiations over Jerusalem. A second and no less important thing is that the Temple Mount is part of our intimate relationship with Jordan. Those who run that place are the Jordanian Waqf, so such a law can bring about an unnecessary clash with Jordan.”

“Nonsense,” Regev told Al-Monitor. “Such talk doesn’t deter me.” Regev, formerly chief army spokeswoman, said she was also approached by the Shin Bet, but it did not succeed in persuading her to back off her involvement with the Temple Mount.

She is not bothered that Bar withdrew his support for the bill. Even before he did so, she said she would sign up other Knesset members from the right and move on with the legislative process. “This is a law that enacts justice,” she said. “They scare him with the Jordanians and the Shin Bet, but the fact is that in the Tomb of the Patriarchs it works well. I have no intention of stopping, despite the threats of a third intifada. Just as I make sure that Father Gabriel can enter the church in Nazareth, so I want every Jew to be able to pray on the Temple Mount.”