Labor Knesset Member Hilik Bar claims that the two-state solution has support among Israelis and the Knesset, but not inside the government, where the prime minister is “trapped in his party.” 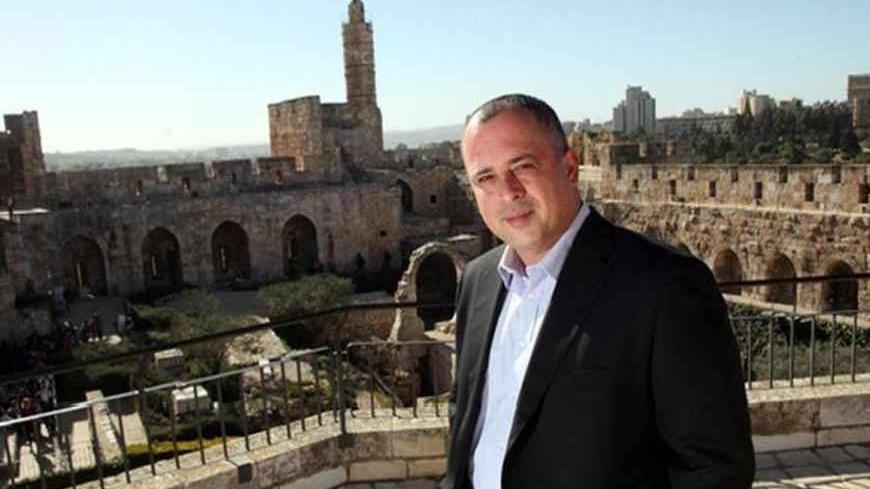 Member of Knesset Hilik Bar is pictured in front of the David Tower in the Old City of Jerusalem, April 2013. - Yossi Zamir

In stark contrast to the current political trend, when most of the young Knesset members chosen in the last elections are focused on the socio-economic agenda in the spirit of the 2011 social protests, Secretary-General of the Labor Party and Deputy Speaker of the Knesset Hilik Bar is actually marching with the tattered banner of the diplomatic process. When others worked to establish a Knesset lobby to address the cost of living and the housing crisis, Bar started the “Lobby for the Promotion of a Solution for the Israeli-Arab Conflict,” which supports the concept of two states for two peoples.

On Sunday morning, July 14, by virtue of his position as secretary-general of the Labor Party, Bar stood beside party Chairperson Shelly Yachimovich at a press conference where she announced early party primaries. Bar believes that this is the right move to get the embattled party back on an even keel. However, with all due respect to internal party politics, he dedicates a great deal of his time behind the scenes, working with other Knesset members to promote a meaningful political effort to promote the two-state solution. On Wednesday, July 17, he is expected to submit a precedential bill according to which the final status of the Palestinian territories and sovereignty over them will be settled in accordance with the "two states for two peoples" principle.

Al-Monitor:  You’re an odd bird among the young members of the Knesset. You opted to promote an issue met with indifference by most of the Israeli public as opposed to social issues that get people to take to the street.

Bar:  I started the lobby because, as opposed to what we see in this Knesset, there is a clear and solid majority for the two-state solution — something that hasn’t been the case since 1992 in the late Prime Minister Yitzhak Rabin’s second term. The tragedy is that there’s a majority in the Knesset and every public-opinion poll shows a majority, there’s just no majority in the government. That’s a structured dissonance.

The prime minister of Israel has been taken hostage. On the one hand, he is held by his party, which, despite the fact that it has grown weaker, continues to move to the far right, and the voices of the party moderates go virtually unheard. Knesset Members Deputy Speaker Moshe Feiglin and Deputy Transport Minister Tzipi Hotovely constantly state that there will be no support for a two-state solution. Deputy Minister of Defense Danny Danon states explicitly that this government does not have a majority for a two-state solution. On the other hand, the prime minister is held by a high-ranking minister in his government, Economy and Trade Minister Naftali Bennett, who more or less says that there will only be a two-state solution over his dead body, and that the Palestinians are a thorn in Israel’s side. This is a right-wing government that does not reflect the majority in the Knesset and public opinion, where there is a majority in favor of the two-state solution.

Al-Monitor:  And the response in the Knesset?

Bar:  It is the largest lobby in the Knesset, with over 40 members. All the Knesset Members from the Labor Party and Meretz are in, and we even have two members from the ultra-Orthodox Shas party and Knesset members from Yesh Atid. You can’t scoff at the support this concept has in the Knesset, nor can you ignore it. The pressure we will apply can be an important factor, particularly when the Arab Initiative is being put on the agenda once again. Since 2002, when the initiative was launched, the Israeli government hasn’t taken it seriously. Over 50 Arab and Muslim countries support the initiative, but Israel is ignoring it. This is a major diplomatic mistake. It’s political folly and shows contempt and disrespect for the entire Arab world, and more importantly, for the chance for peace.

Al-Monitor:  While there might be a majority in the Knesset, negotiations with the Palestinians have stalled before they even started and as it seems, at least as far as Israel is concerned, a diplomatic arrangement is not feasible, as you said yourself. So how exactly can the lobby make a difference?

Bar:  Despite the situation, we need to promote the concept and create the right atmosphere. As chairman of the lobby, I wrote a letter two weeks ago to US Secretary of State John Kerry. I promised him that we would support his efforts in the Knesset, and I invited him to meet with us. He said that he was moved by the content of the letter and thanked us for the support. About two months ago, I met with [chief Palestinian negotiator] Nabil Shaath, and three weeks ago I met with [Senior Palestinian official] Saeb Erekat in Jerusalem. In my meeting with him, I also stressed the solid majority in the Knesset for a two-state solution, and I suggested that he demand Palestinian Chairman Abu Mazen immediately drop all preconditions for talks, because they make him appear to be the one impeding the start of the negotiations.

Al-Monitor:  Did the Labor Party hinder the diplomatic process when Yachimovich decided to forgo Prime Minister Benjamin Netanyahu’s generous offers to join the government, choosing to remain in the opposition?

Bar:  We didn’t need to join the government. Since Yitzhak Rabin’s assassination, with the exception of the short [former Prime Minister Ehud] Barak era, the Labor Party has lost the elections, but has been part of all the governments. They always said, "We’ll join and influence the economy and the diplomatic process." We have been in the governments for 20 years, and it never happened. The opposite was true: capitalist governments and a diplomatic deadlock. Now we’ve reached the peak — five whole years of diplomatic stalemate, and as a matter of policy, with Abu Mazen, we won’t negotiate.

Bar:  In the last election campaign, the word "peace" was scarcely uttered. There is no peace discourse today. Did those 20 years we were part of the government despite losing the elections promote peace? If there is a peace process, we’ll support it from the opposition and won’t oppose it. If Bennett and the extremists leave the government, we’ll step in even without fancy positions to promote a peace treaty. We will act responsibly.

Al-Monitor:  It’s a little odd to hear you claim that peace was shunted aside in the election campaign. After all, Shelly Yachimovich led this line.

Bar:  I’m not ignoring that. But we have learned our lesson. There’s a reason I am head of the peace lobby. There’s a reason why Shelly is talking about the diplomatic process, and we are the ones who called for discussion of the Arab Initiative in the Knesset. After putting the social cause on the back burner, we have rallied again around the diplomatic process to create an alternative.

Al-Monitor:  Is Netanyahu telling the truth when he declares his commitment to the diplomatic process?

Bar:  I think he very much wants to be the Likud party’s next Menachem Begin, but he is truly trapped in his party, which has become extreme. When Bennett can bring down the government at any moment, it’s not at all certain that Netanyahu will have the courage to go for a diplomatic move.

Al-Monitor:  As secretary-general of the Labor Party, how are you preparing for the storm ahead now that there is a date for primaries for party leader?

Bar:  It won’t be easy. There will be a fight, but at least we will be the first party to resolve its internal battles before the next elections.

Al-Monitor:  What will happen if before the new elections, former Chief of General Staff Gabi Ashkenazi wants to vie for the position of party leader?

Al-Monitor:  You work closely with Shelly. Are you surprised by her ability to put up a fight?

Bar:  She’s really demonstrating impressive resilience. She’s got very thick skin. But she’s going to have a very tough fight, and in primaries — you know how you go in, but you don’t know how you’ll come out.