Opposition leader Isaac Herzog has no intention of joining the coalition or forming an alternative government, reminding Prime Minister Benjamin Netanyahu that peace supporters “have a majority in this Knesset for an agreement with the Palestinians.” 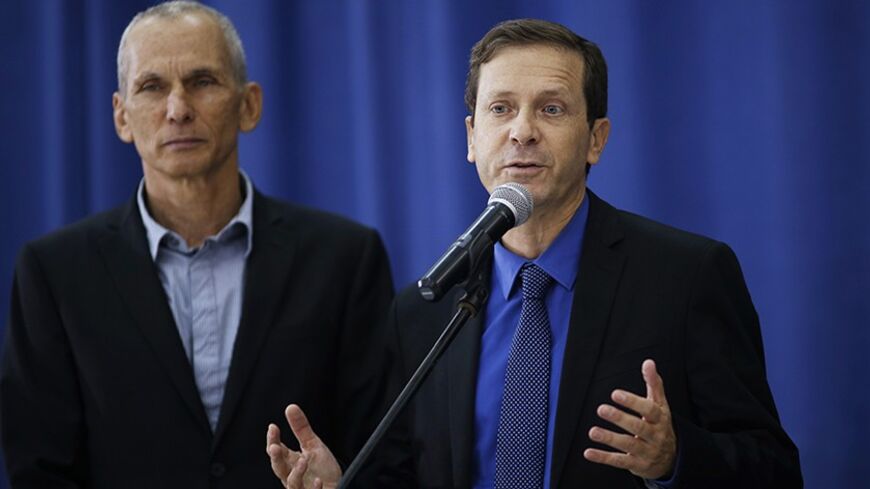 On Jan. 29, Finance Minister Yair Lapid and Justice Minister Tzipi Livni approached Chairman of the Opposition Isaac Herzog while he was standing at the door of the Knesset assembly hall, and a light and noncommittal conversation developed among the three. As expected, the sight of the three heads of the center-left parties whispering and laughing together generated some interest among the Knesset members and ministers who passed by, trying to catch a telling sentence. After all, the Israeli political system demonstrates nervous signs these days, as the date of the announcement of US Secretary of State John Kerry’s document approaches. Every nuance has a meaning.

Meanwhile, Prime Minister Benjamin Netanyahu can rest easy. A peace coalition to threaten his rule hasn’t been created under his nose. At the high point in the conversation, Herzog teased the two, wondering if they came over to talk to him just to scare Bibi (Netanyahu). If you really want to scare him, Herzog told them, you have to leave the government. But Herzog has been in politics long enough to know that quite a long time might pass while the diplomatic process comes alive, until the champions of negotiations with the Palestinians in the Netanyahu government would threaten to leave due to lack of diplomatic progress.

The rumors that Herzog is laying the groundwork for an alternative government are also premature, especially as far as changes in the diplomatic area are concerned: there’s no agreement yet, there’s no implosion in the talks and it seems that Netanyahu will succeed in stalling for more time with the present coalition.

This means that Herzog and the Labor Party are not close at all to a change of status. In other words, Herzog, too, is waiting for developments.

Meanwhile, the most notable change in his party is that the diplomatic agenda has returned to a place of honor. This is the reason to suspect Herzog of seeking the fastest and shortest way into the Netanyahu government.

“I’m not running for any government, just as I’m not creating an alternative government right now. Nothing close to that. When there’s a real development, an agreement or a blow-up, there will be something to talk about,” Herzog said in an interview with Al-Monitor at the beginning of the week, while another conflict between Washington and Jerusalem transpired, this time following Kerry’s warnings of harm to the Israeli economy if the negotiations fail.

Al-Monitor:  Member of Knesset Herzog, what do you think will happen? You occasionally meet with the prime minister for updates, you speak with political and diplomatic sources. You also have experience in reading Netanyahu, since you were a minister in his second government, when you were promised a diplomatic process that never happened.

Herzog:  The last time I met with him for an update as the chairman of the opposition was three weeks ago. I left feeling that he understands the need to reach an agreement, but I’m not sure he has the courage. When I served in his government at the beginning of 2009, Netanyahu presented bold goals. There was the “Bar Ilan speech” where he recognized the two-state solution, and there was the settlement freeze for 10 months. This was unprecedented in its reach. Unfortunately, [Palestinian President Mahmoud Abbas] Abu Mazen didn’t respond to the gesture and the opportunity was missed. Today, there’s another opportunity that won’t repeat itself.”

Al-Monitor:  Is there something you can do as the head of the opposition besides assuring Netanyahu a safety net?

Herzog:  In my opinion, Lapid and Livni have to go into the prime minister’s office and ask him explicitly: Are you with us or with [Defense Minister Moshe] Bogie Ya’alon? If he’s with Bogie, I suggest that they quit and form an alternative coalition.

Al-Monitor:  How will it be comprised? Will you be its chair?

Herzog:  I won’t go into details right now. It’s still early. I’m only saying that it’s an option that exists. It might be that we’ll have elections and it might be that an alternative coalition will be formed. I’m of the opinion that the people won't forgive the leaders if they miss a historic opportunity, and this includes Lapid and Livni.

Today, I lead two coalitions: The first is the opposition, such as it is, and I also lead the peace coalition, which numbers 59 members, not including the Likud and the ultra-Orthodox parties. It is thus clear that we have a majority in this Knesset for an agreement with the Palestinians. Netanyahu doesn’t have to fear the right, but to bravely walk toward this decision. To adopt the suggested framework and advance with it. We will provide a safety net for him as a responsible opposition.

Al-Monitor:  What would be the right time to join his government, as far as you’re concerned?

Herzog:  At this point, I’m not prepared to enter negotiations over joining or not joining the government, because no one knows if Netanyahu and Abu Mazen would reach the objective. I have no reason, as someone who thinks that this government has made mistake after mistake, to start talking about joining it. We’re talking in a responsible manner and we’ll consider our options when there will be something to consider.

In the meantime, I look at what’s going on in the government and it’s worrisome. Only this last weekend, the transfer of government budgets to the Yesha Council [the settlements' umbrella organization], a political organization that works against the government, was exposed. This is another example of how they hide what they’re doing under the noses of members of the government, foremost of whom [is] Finance Minister Yair Lapid. It shows the power of the settler lobby, which controls the funding pipeline.

Lapid, instead of making sure that the money is targeted toward lowering the price of housing, to the Galilee and the Negev [Desert], under his watch hundreds of millions of shekels are being transferred across the Green Line. I applaud his decision to stop the funding, but in my opinion it’s embarrassing that he didn’t know about it. What place does the Labor Party have in a government like this?

Al-Monitor:  What is your position regarding Netanyahu’s harsh reaction to Kerry’s warnings about a boycott?

Herzog:  An agreement with the Palestinians must be reached, not because of the threat of a boycott but because it’s an important national need for the State of Israel to ensure its future as a Jewish and democratic state. Thus, the minister of economy and trade [Naftali Bennett], too, should have been much more careful with the scorn he expressed toward this threat. While this isn’t the reason we should start negotiations, it shouldn’t be taken lightly.

It’s absurd that the minister of economy and trade, who’s in charge of exports and of Israel’s economic ties, behaves in this way. I’m not afraid of the boycott and I personally fight it from every place on earth. I despise such boycott initiatives, and I think first and foremost they hurt the Palestinians themselves. But unlike Bennett, I don’t scorn them and other international legalization processes. Bennett’s words were meant to scare the public and terrify it as part of a political tactic that’s intended to solidify a right-wing bloc under his leadership.

I know that Kerry expressed himself on this more than once, and he says this out of deep concern for the interests of the State of Israel. He’s been a true friend for decades, and he’s genuinely worried about processes he sees in the international arena. At the end, it’s clear that a diplomatic process is good for both sides.

I suggest ignoring the incessant pronouncements from all sides. We’re reaching a moment of truth when the leaders will have to make life-changing decisions. The American "softening campaign," which has been using the media to reveal such and such elements of the framework document, proves that there aren’t winners or losers in it. There are clear advantages to both sides in the agreement, and I prefer to see the advantages.

Al-Monitor:  Let’s say that Netanyahu accepts the document, what about the other side? We can’t constantly self-flagellate. You said yourself that in Netanyahu’s last term he took courageous steps and President Mahmoud Abbas didn’t leverage them.

Herzog:  No one knows what Abu Mazen is thinking. Certainly they expect him to advance as well. Sure, the other side is annoying and exhausting and says really grievous things, but in the end that’s the partner we have to live with. We have an interest to progress because Israel is always seen as the initiator. We must not reach a situation where we are seen as responsible for the breakup of the talks.