Lapid: Israel has the right to criticize Iran deal

In an interview with Al-Monitor, Yesh Atid head Yair Lapid argues that as the prime target for an Iranian bomb, Israel has more justification to speak up against the nuclear agreement than other countries. 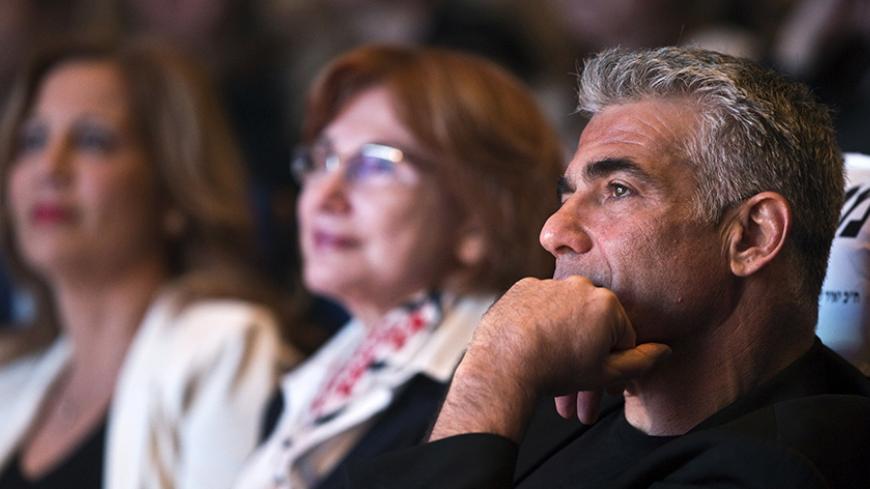 Eight months ago, Prime Minister Benjamin Netanyahu fired Yair Lapid from the job of finance minister, instantly turning him into one of his biggest critics and rivals in Israeli politics. Today, with 11 seats in the opposition and after losing nearly half of his political power in the March 17 election, Lapid has nonetheless succeeded in setting the agenda and achieving media prominence even in the international arena — all part of a strategic plan with the goal of running for prime minister in the next election. He hopes that at that point he would have enough right-wing voters backing him to enable him to form the next government.

Lapid has been working hard to deepen his involvement in diplomatic and security affairs, in order to close what the public perceives as a gap in experience and seniority as compared to Netanyahu. Last week, he published a remarkably patriotic column in the Italian Corriere della Sera and the German Die Welt, where he attacked Iran and didn’t mention Netanyahu, even though he’s one of the leaders of the opposition. “They just signed the agreement and the world is rushing to do business with Iran, which funds terrorism, stones women and hangs gays. And you threaten us with a boycott? Is the world crazy?” In the meantime, internal polls conducted by the political parties indicate that Lapid is making the right moves.

In an interview with Al-Monitor, the chairman of Yesh Atid explains why the nuclear agreement with Iran is bad and how he differs from Netanyahu. He also discusses his responsibility, as someone who was still a member of the Cabinet eight months ago, for the failure to prevent the agreement and for the deterioration of Israel's relationship with the United States.

Al-Monitor:  You, Netanyahu and the chairman of the Zionist Camp, Isaac Herzog, sound like a single chorus when it comes to the agreement with Iran. Is there nothing positive about this agreement?

Lapid:  The overarching question is: Is this agreement good, or is it bad? Does it distance Iran from nuclear capability or bring it closer? Does it serve the purpose for which it was written? To all of these questions the answer is negative, especially because of the fact that this agreement does not enable real inspection of Iran’s nuclear development. One needs only to look at the clauses dealing with inspection to consider the whole agreement terrible. This is something that for some reason no one has dealt with, but it’s very serious because we are supposed to be one of the countries that provides intelligence on any fraud on Iran’s part.

Clearly anyone, if he has to, would find some clause he likes, but there’s a bigger question: whether the agreement is good or bad — and this agreement isn’t good. At the same time, there’s another debate taking place here in Hebrew, that goes: If we think that there’s no way to prevent this agreement from advancing, we can’t conduct this battle as if there’s no tomorrow, but rather to think of the future. Because there is a tomorrow. There’s a future with the Americans, with the Europeans, with Russia, which is becoming a more active player. We have struggles ahead of us that aren’t easy. Either there will be a French proposal [at the UN security council for renewal of talks and Palestinian statehood], or there will be alternative processes that the Americans will lead in the Security Council. No one can figure out how serious [Palestinian President] Mahmoud Abbas is about his threat to resign or making moves toward de facto statehood. Facing all of these threats, we must be in a position where we haven’t burned all the bridges with the Americans. That wasn't done and it’s worrisome.

I’ve been speaking with the Americans about how this agreement isn’t good. I’ve told them, “In the end, we are also the target, and we may have more of a right to speak up against the agreement than other countries.” It’s not an objective event as far as Israel is concerned. I’m not saying these things to toe the line with Netanyahu, but rather in light of a very professional analysis of the agreement.

Al-Monitor:  Former senior officials in the security establishment, like Isaac Ben-Israel and Ami Ayalon, think this is a good agreement. Are they wrong?

Lapid:  I’m familiar with their position and I don’t agree with it. I think they’re wrong. Some of them are wrong with respect to the professional analysis, and others are left-wingers. The left almost automatically believes that the world is a better place than it really is. Factually, most experts also believe this agreement isn’t good. Even those who supported the agreement, like Ben-Israel, in the end didn’t speak about more than the agreement. What does this mean? In order to reach the conclusion of whether it’s good or bad you have to reach wider conclusions about the rationale of the Iranian regime and whether it’s prepared to be part of the family of nations.

Al-Monitor:  And do you really think Israel could influence this?

Lapid:  Of course it can. With the right kind of work with the Americans, without [Netanyahu's March 3] speech before Congress, we could have influenced the formulation of critical elements like the issue of inspections or the way the joint committee works. All this didn’t happen because even before the Lausanne talks, Israel wasn’t in the loop, and it wasn’t in the loop because of the conflict between President [Barack] Obama and Prime Minister Netanyahu that in my view wasn’t conducted well. I don’t normally attack Netanyahu in English, and so I’ll stop here.

Right now we’re facing the outcome so we have to focus on it. We can do a retrospective analysis and at some point we will be obliged to do that. The State of Israel won’t escape the need to conduct a thorough debate over the question of how it got to the point that an agreement so critical to our security was signed without our involvement in shaping it, and how we lost the ability to influence the final result. But right now we have to deal with what can be done.

Al-Monitor:  And what has to be done?

Lapid:  As a nation, we can’t allow such an erosion in our special relationship with the United States. These are relations that are part of our security strength and Israeli deterrence capabilities. We have to get the discussion started already on the compensation package, because this will have significant implications for our security resilience. You don’t want to be in the position where your package is put together only after the Saudis and the Gulf states got theirs.

On the political level, we have to go from Democrat to Democrat, from senior White House aide to senior White House aide, from journalist to journalist and to the president and his staff and say, “Let’s turn down the heat together.” It’s possible. The Americans want to do so. I say this with full knowledge. Today the president is clearly the most extreme member of his staff. He says, “Excuse me, [the Israelis] invited me to war,” so he acts like it’s a war. Of course this is not a healthy process and we have to calm things down. It isn’t good for anyone.

Al-Monitor:  You were in the Cabinet until eight months ago. Why didn’t you intervene when you could have influenced things from the inside?

Lapid:  I would never disclose what happened in the Cabinet because I want to keep my good name as the only person who didn’t leak from the Cabinet. I’ll only say that in October I asked for a discussion in the Cabinet — I requested it in writing — regarding the crisis with the United States. It’s no secret that this discussion never occurred. Cooperation with the United States is critical even now because it’s clear that Iran will cheat. There’s no way it won’t happen. This is its history, it’s the way it behaves. The question is what will be the degree of cooperation between Israel and the United States. The Americans have a very limited attention span for us right now. We have to restore their attention span and it’s possible. I don’t know whether Netanyahu is the right person to do so. From the moment Netanyahu took sides in the American elections and gambled on [Republican candidate Mitt] Romney, something was damaged that hasn’t been repaired since. It wasn’t even connected to the Iranians. It was a dreadful gamble that also didn’t read America correctly. Out of all the things I’ve said about Netanyahu, what angered him the most was that I said that he no longer knows America, because it has changed.

Al-Monitor:  Do you see a connection between the nuclear agreement and Netanyahu’s diplomatic intransigence?

Lapid:  Netanyahu’s whole worldview says that you shouldn’t make any change you don’t have to. People can no longer imagine Israel on a different path. Everything is connected: The “no partner” mantra, that you can’t believe anyone — everything is apocalyptic, and in the end it creates an atmosphere that doesn’t allow any hope. I don’t think countries can exist without hope. Netanyahu’s greatest struggle is against the possibility that people could imagine other ​paths than the one we’re marching on. I think it’s existential to separate from the Palestinians — not in order to reconcile with the Americans. In the end, Jewish existence in the Land of Israel depends on our ability to separate from them. We have to choose as a society, at some point, between the past and the future, between fear and hope.