In an interview with Al-Monitor, Chairman of the Foreign Affairs and Defense Committee Zeev Elkin explains his decision to open an inquiry of the Gaza operation, in spite of objections from Prime Minister Benjamin Netanyahu. 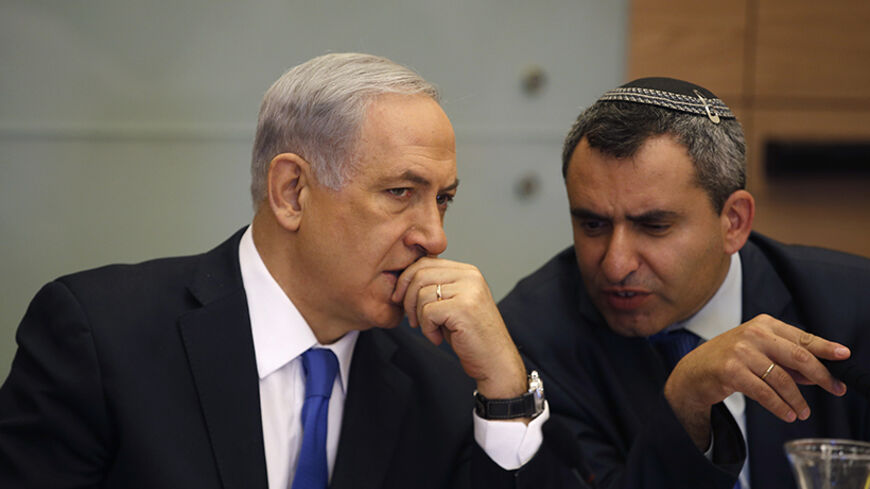 “In the end we’ll have to conquer Gaza, after all, Hamas will not change its nature and will continue to grow stronger. It does not want us here,” the chairman of the Foreign Affairs and Defense Committee of the Knesset, Knesset member Zeev Elkin of the Likud, told Al-Monitor in an interview on the end of the campaign in Gaza and its political ramifications.

Elkin also said similar things to the prime minister in the course of Operation Protective Edge, when the two met one-on-one. He argued to Netanyahu that the powerful ground operation should have started at an earlier stage. But despite the criticism, Elkin, a member of the ideological right flank of the Likud party, said that he’s full of admiration for the prime minister. In his view, Netanyahu succeeded in putting political calculations aside in his decisions, even when he knew he would be hurting himself and the Likud in the electorate. “I was witness to debates where some participants told him that he would be hurt among the political right by his conduct, but he always knew to put aside the immediate political interest,” he said. Alongside the praises for Netanyahu, Elkin announced at the beginning of the week on Aug. 3 that the Foreign Affairs and Defense Committee “will work as a commission of inquiry” into the fighting in Gaza. This, the prime minister liked less. What’s certain is that Elkin, appointed to the position three months ago, intends to do more than just keep the seat warm.

Al-Monitor:  When you announce that you’ll work as a commission of inquiry, you assume at the outset that you will find some failures.

Elkin:  We intent to do our direct and basic duty as a body charged with the supervision — to conduct a process of study and drawing conclusions while looking forward to the next conflicts, which could take place soon. As the Committee on Foreign Affairs and Defense, we have many advantages, because we are the only body for which you can’t revise history. We have protocols from recent years and months. Whatever was said by each of the heads of the security forces is kept in the committee’s protocols. Aside from us, only the cabinet has similar information. In this respect, we have a clear advantage on all the other bodies in the ability to understand the progression of the event, and a huge advantage in terms of the implementation (of the conclusions) in the future. Everyone says there have been failures, and it’s logical that there would be with such a scope of fighting. We know about some of the things, and some have to be clarified. The tunnels are one of the important things that will be investigated. Contrary to what has been made known, we know much more about the tunnels than people think, but you don’t attack every threat you know about. There’s a similar threat from Hezbollah as well.

In certain committees there have been discussions about the tunnels in recent months. What’s true is that it’s unclear whether the army knew their extent. There are many questions, and we’re asking them, and we’ll continue to ask and to deal with them in the framework of the committee.

Al-Monitor:  Some accuse you of acting out of calculations of political gain. The prime minister didn’t like how quickly you announced an inquiry in your committee.

Elkin:  What’s political about it? We’re a supervisory committee, and various representatives of all the factions are party to this idea. It’s not that I’m going to investigate alone. There are [Knesset members] Yariv Levin of the Likud, Ofer Shelah of Yesh Atid, Shaul Mofaz of Kadima, and Eli Yishai of Shas.

I informed the prime minister but didn’t ask for his approval, because this is my role. I hope that he understands that this is a natural process and it’s the basis for parliamentary supervision, and I hope he’ll cooperate. 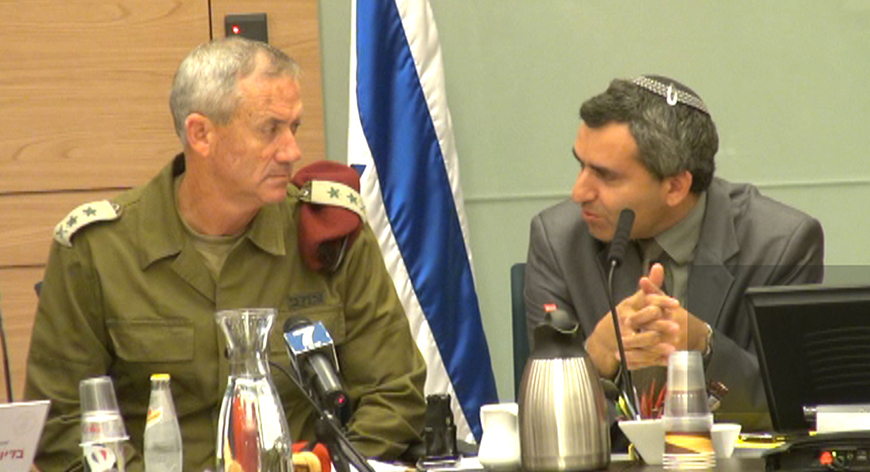 In a certain respect we have already started the process. I’m not setting a schedule but it’s going to be an intensive and serious process and central to the work of the committee in the coming months. It’s important to say that I’m not approaching this from an “anti” stance or from a stance where I want heads to roll. There was a military campaign that wasn’t simple, and on the one hand we have accomplishments and many brave deeds, but on the other hand we also have things we need to investigate on the micro and macro level.

Al-Monitor:  And why rush?

Elkin:  Because no one can determine whether tomorrow Hamas won’t despair in that it didn’t get what it wants and shoot at us again. No one can make such a commitment. There is a reason for the fact that not all the reserve forces were released. We also need to take into consideration that the initial weeks after the campaign are the most sensitive.

Al-Monitor:  Will you also investigate the conduct of the cabinet? The ministers will probably not feel comfortable being investigated by members of Knesset.

Elkin:  There’s no reason for them not to feel comfortable. It’s professional. Certainly we’ll also investigate the cabinet, we can request recordings of the meetings, and what interests me is what the cabinet knew and on what basis it made decisions. It’s important to me to understand that the information and the decision-making process were in order, and that the cabinet members had the correct information.

Regarding the ministers who are members of the cabinet, I didn’t ask their permission to investigate them, and none of them asked me why I’m doing this. We do not intend to investigate the ministers separately. In the meantime we already met as a committee with the foreign minister, and we have a subcommittee on foreign affairs and public diplomacy. We met with the head of the Shin Bet, the Israel Defense Forces chief of staff, the prime minister, and we toured the south with the commanding general on Sunday.

Al-Monitor:  You said during the operation that there’s no getting away from occupying Gaza. Do you still think so?

Elkin:  During the whole campaign I’ve said so, but I added that I don’t think it will happen in this round for many different reasons. In the end, in the long run, Hamas will not change its nature, and will continue to try to grow stronger and hurt us. At some stage we will have to dedicate a lot of resources to deal with this threat. Right now, if it’s up to us there are also other challenges that require our attention, like Hezbollah and the new state in Syria.

Al-Monitor:  What does this mean?

Elkin:  That we made gambles that were too big and too dangerous in the framework of the cuts in the defense budget in favor of the social struggle. Without diminishing its importance, after all there is priority for the most basic right to live, before anything else. We are in a problematic and dynamic neighborhood, and so it’s our duty to prepare as much as we can against the threats, this is no luxury. I argue that the discourse and its results do not provide an adequate response to the defense budget. I also said this in debate. Now it’s clear: Hamas does not seek to divide the land. Its goal is for us not to be here. So it’s either them or us.

Al-Monitor:  Are you satisfied overall with the accomplishments and the way in which the campaign was conducted?

Elkin:  I had quite a few points of disagreement with the prime minister, and I argued that we should have started a more massive activity much earlier. I didn’t like the approach of intermittent cease-fires and the gradual conduct of the fighting. On the other hand there are many things in the conduct of the campaign that I note with praise, like orderly work on the part of the commanders — the prime minister, the defense minister and the chief of staff. This is very important.

Another positive thing is the ability of the prime minister to distance himself from political calculation, since there were not a few crossroads where political issues arose, and it happened before my eyes. I was witness to debates where some told him that he’ll be hurt among the political right by his conduct, but he always knew to put the immediate political issue aside and said, “I’m aware of the price, but in matters of life and death I will not consider political profit. I’ll deal with it later.” I really appreciated this, even when I thought things should be handled differently.

Al-Monitor:  And will he pay a political price?

Elkin:  I estimate that there is a certain price and damage on the right. There are voices in the Likud that have moved toward [HaBayit HaYehudi party chair] Naftali Bennett and we received some voices from the center. The problem with the voices from the center is that they are “shifting sands,” they can leave us in a second, and those who have left us toward the right will be hard to return to us.

Al-Monitor:  We hear some expectations of early elections. With your advanced political sense, what do you anticipate?

Elkin:  The political wave of the war is behind us, so that if something happens, it won’t be because of the war. But the next budget isn’t a simple matter, since it’s clear that it will be more complicated in light of the war. I don’t envy the minister of finance, who will have to present a budget that will respond to the war and will include improvements in security. It’s clear that whoever thought that there are no threats, sees now that it’s not true. How this works out with the ambitions of the minister of finance on social issues, I really don’t know.

Al-Monitor:  As former deputy foreign minister, how can we deal with public diplomacy when one sees Gaza destroyed?

Elkin:  The most correct sentence we have to use is one the Egyptians said when Hamas rejected their proposal for a cease-fire. They said that Hamas takes upon itself the blame and the responsibility for the destruction and the victims in the Gaza Strip. What happened here is that Hamas carried out war crimes against the Palestinian population, in that it used it as a human shield, as well as against United Nations institutions, when it turned them into military bases.