Likud's Avraham Negusie, newly sworn in to the Knesset, promises in an interview with Al-Monitor to fight for Jews from Ethiopia, saying, “There shouldn’t be economic considerations of who is more expensive than the other. That’s not the Zionist ideal.” 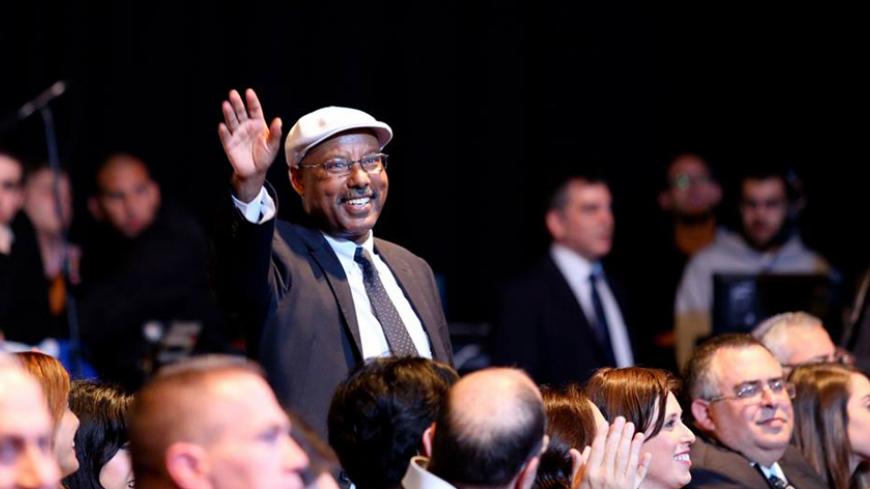 On March 31, at the age of 57, 30 years after he left the town of Gondar in Ethiopia, Avraham Negusie was sworn in to the Israeli Knesset. He was elated the entire day.

Until election night, Negusie, 27th on the Likud list, watched the polls, which predicted barely 22 seats for the party and thought he was a long way from his dream of becoming a Knesset member. He was therefore surprised when, a half hour before television stations called the elections, he got an urgent call from Likud headquarters with the announcement, “Come to the exhibition gardens. There’s drama. It looks like you’re in.”

On his way from Jerusalem to Tel Aviv, Negusie took dozens of phone calls from well-wishers, and since then, he has been busy planning his first term as one of Israel's 120 elected representatives. It is clear to him that he’ll work on social issues and that he’ll be the advocate and voice for immigrants from Ethiopia on Knesset committees.

Negusie will be the only Knesset member with an Ethiopian background in the twentieth Knesset. Six members of the Ethiopian community have preceded him, among them the first woman Knesset member of Ethiopian descent, Penina Tamanu-Shata of Yesh Atid. Like his predecessors, Negusie seems to be an atypical, unrepresentative symbol for the integration of his ethnic group, most of which lives at the bottom of the socioeconomic scale in Israel, trapped in impoverished neighborhoods.

Negusie, who holds a doctorate in education, built his civic life mostly through political activism, including successful battles he led in the past two decades to bring Falash Mura to Israel. Today, according to Negusie, there are about 5,000 of them in Ethiopia who have families in Israel, and they will celebrate the traditional Seder dinner for Passover far from them in camps in Addis Ababa and Gondar.

“I hope that as a member of the Knesset I can influence the decision to bring them to Israel as soon as possible,” said Negusie in an interview with Al-Monitor. He also explained why the left hasn’t succeeded in becoming the political home of the Ethiopians in the full interview below:

Al-Monitor:  You’ve succeeded in fulfilling a dream, but you are obviously aware that most immigrants from Ethiopia have not succeeded in integrating, that young Ethiopians experience discrimination and difficulty in integrating in the educational system, not to speak of racism.

Negusie:  My accomplishment is not only personal, but belongs to the entire Ethiopian community, to the Likud Party, the country and Israeli society. In Israel, through the political system, I integrated and made achievements. I serve as the chairman of the Likud’s Jerusalem branch, and I’m sure that I serve as a model for young Ethiopians to enter politics and make an impact. Today, I feel that all the responsibility is on my shoulders, and it’s a lot of responsibility. On the other hand, I know exactly what the situation of Ethiopian immigrants in Israel is, since I’m around in the field.

Yesterday, for instance, I heard that because of a budget problem, they won’t hold community Seders in absorption centers. Five thousand Ethiopians live at 17 centers and won’t have a place to celebrate the holiday. I tried to intervene and found a budget, but it’s too late to organize the Seder, and it hurts.

The people who live there haven’t succeeded in integrating into society. Because of the high price of housing, they haven’t succeeded in buying a home, as most of them don’t have a regular job or an income. But I believe that in the coming years, we can improve the situation and give them tools, especially to the young people. I feel that I’m their emissary.

Al-Monitor:  What do you think about the claim that was heard after the election that voters from lower economic levels — including immigrants from Ethiopia — vote for the Likud and the right-wing parties even though their economic situation is bad, instead of the social-leaning parties on the left that promise to improve their situation?

So when it comes to results, those same people from the poorer populations who have three or more kids feel that they have to pay less for preschool and phones. What exactly did the left-wing parties do?

I feel that it’s condescending toward the weak. I had a lot of arguments with people outside the Likud, and they don’t have anything to say when I argue these points. What exactly did the Labor Party do for immigrants from Ethiopia? I haven’t found even one thing. In the Likud, I feel at home.

Al-Monitor:  Are we a racist society?

Negusie:  I don’t think that as a society we’re racist, but that there are racist people among us, like in every society. It comes from ignorance and evil. In my years of fighting to bring Ethiopians here, I experienced racism. People said all sorts of things in order to scare me and to create the impression that all the Ethiopians want to come to Israel in order to take advantage of the country. All the time I heard, “So what, all of Ethiopia will come here?” It hurt me, because they didn’t talk like this about bringing Jews from France and Russia.

After that they said it costs more to absorb Ethiopians than Russians because of the difficulties integrating them. So when you hear this on the one hand, and on the other they roll out a red carpet for immigrants from Europe, you feel that there’s discrimination and racism also on the part of state officials. I was educated to believe that the State of Israel is the home of any Jew, no matter who he is, and that’s how it should be. There shouldn’t be economic considerations of who is more expensive than the other. That’s not the Zionist ideal. These people have been Jews for many generations. Their families are in Israel, and their place is here. This is our strength.

As a society, we have to help the weak, and the Ethiopians who came from a traditional society need help. This is the community that most needs attention.

Al-Monitor:  What issues do you want to advance in the Knesset?

Negusie:  I’ll focus on social issues, naturally. I’m coming in as a representative of the immigrants in the Likud, and I’ll work mostly in the area of integration in Israeli society.

I walk around the neighborhoods and see that there is distress in our community. The biggest problem is that the Ethiopians are concentrated in impoverished neighborhoods, and they don’t have money to buy homes in other places. It’s destructive. There are schools where 80% of students are Ethiopians, and there are preschools where 100% of the kids are Ethiopians, and so it’s difficult to impossible to integrate. I don’t say that we should give out apartments for free, but you have to help young people get out of there, and the state can help.

In the realm of education, I want to advance the issue of integration. If there’s integration starting in preschool, many problems will be solved.

Al-Monitor:  For a large part of the past 20 years, the Likud has been in power and not much was done to advance integration.

Negusie:  ​First of all, to be exact, Ethiopians were brought to Israel only under Likud governments. [Prime Minister Yitzhak] Shamir, in the 1980s and 1990s in the big Aliyah operations and after that [Prime Ministers Ariel] Sharon and Benjamin Netanyahu. It’s a fact. I say that there are problems, but to say that there’s a total failure in dealing with absorption is not true. You have to keep things in perspective. Closing gaps is a process, and I feel that I’m part of the change and the improvement. Most of us are proud citizens of the State of Israel.