In an interview with Al-Monitor, Ethiopia-born Knesset member Penina Tamanu-Shata speaks about her fight against discrimination, saying that she decided to be "the voice for the weaker sectors of the population." 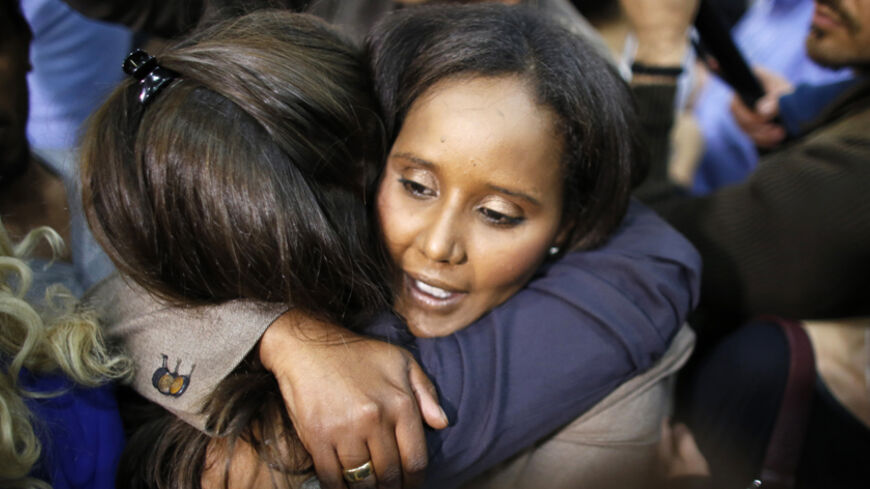 Whenever Knesset member Penina Tamanu-Shata of the Yesh Atid Party is asked to chair a debate in the Knesset, an image of herself as a barefoot 3-year-old comes to her mind, moments before she was extracted out of the desert in Sudan and put on a Hercules jet, on her way to Israel. Even now, about 30 years later, as she fills the symbolic role of deputy speaker of the Knesset, the memory of that event underscores the long road she has traveled and the many battles she has waged on her way to success. At just 33, she is one of the youngest members of the Knesset, but she had already built a career for herself as a lawyer and a journalist.

In an interview with Al-Monitor, she said that when she was first elected to the Knesset in 2013, she was advised to stay away from issues concerning the Ethiopian community. That way, she was told, she would not be limited to a particular niche and be branded as someone who deals exclusively with ethnic issues. Tamanu-Shata refused. She had her own agenda. She wanted to make sure that the voices of invisible people in society would be heard, and that included the Ethiopian community. She wanted to create a more egalitarian society.

As far as she is concerned, struggles surrounding the discrimination faced by Ethiopian Jews, manifestations of racism against them and the government’s failed handling of the community now fill her day.

Al-Monitor:  Doesn’t it bother you that as a member of Knesset, you are identified mainly with the struggles of the Ethiopian community?

Tamanu-Shata:  No. Some advisers told me not to deal with those issues so that I wouldn’t be branded as an Ethiopian, but I said from the very beginning that I don’t intend to apologize for that. A passion to achieve equality burns deep inside me. I have no qualms about the way I define myself. I’m a Jew, I’m a woman and I was born in Ethiopia. My parents suffered there because they were Jews. They were accused of blood libels, while here in Israel we’re called, “blacks.” There were Ethiopian members of Knesset before who preferred to avoid dealing with affairs relating to the community. That’s not where I am. I am an Ethiopian. It is engrained deep inside me, and I will fight for every person’s right not to be the victim of discrimination.

That is the reason why, when I got to the Knesset, I was determined to be the voice for the weaker sectors of the population, and that is what I’m doing. I am the address for at-risk youth, for the emotionally disturbed and for the victims of crimes. I want to contribute to creating a healthier society, a society where equal opportunity is real, and not just some slogan. I am a representative of the public in a society that is divided and torn apart. So many of us are oblivious to the other, and the weak get trampled by anyone with a powerful lobby. I am lucky that I belong to a party, where there is no need for any political wheeling and dealing just to get elected.

Al-Monitor:  You spent many years speaking on behalf of the state overseas, but you are still very critical of it.

Tamanu-Shata:  We really are a wonderful country. I always say that this is a country of miracles. There is a film clip showing Hercules jets landing in the middle of the desert during Operation Moses [bringing Ethiopian Jews to Israel in 1984-85] and extracting us from there. Doing that required a lot of courage and resourcefulness. I cry anew whenever I see the film clip. We are the only country in the world that conducted such rescue operations, which is why, despite all of our problems, I won’t let people hurl their invectives at us as a country.

For 14 years, I’ve been speaking on behalf of Israel both within the country and around the world. I am a Zionist. I really love my country. It has a lot of beautiful things about it that don’t often get seen. At the same time, it is also a very complex country. We are a very diverse society. There are a lot of ethnic groups living here, and we don’t have to hide it. I always talk about those kinds of things.

I wised up to all that at a very young age. I wandered about knowing that my chances of achieving success were limited, but I also decided that I wouldn’t be bitter about it, and that I would take steps to correct the situation. When I was 20, after completing my military service, I led the struggle against a school in the town of Petach Tikva that would not accept Ethiopian students. I studied law, because I was looking for justice, but I quickly received a jolt of reality. I felt like people were oblivious to inequality, racism and discrimination, but after a lot of fights I learned that if you strike the rock with determination and in the right place, it is possible to make a change.

Al-Monitor:  What you’re describing is a severe case of dissonance.

Tamanu-Shata:  I think that as Ethiopians, we do have a severe case of dissonance. We are a very Zionist community, but as I said earlier, we encounter the ugly sides of things every day. I take part in a lot of missions overseas on behalf of the Knesset. When asked if there is racism in Israel, I describe the complicated situation here. After all, we’re not the only country in the world where there is racism against black people.

Al-Monitor:  Yes, but as far as I know, we are the only country in the world that systematically destroyed blood donated by Ethiopians as a matter of course. In December 2013, you yourself were humiliated, when you tried to donate blood and were refused, and you were a member of Knesset at the time.

Tamanu-Shata:  When I was 26 years old, I was one of those people who fought for the rights of Ethiopian immigrants to donate blood. That struggle was a partial success. Until then, there was a comprehensive ban on blood donations from Ethiopians in Israel. The procedure was changed after our struggle, so that Ethiopians born in Israel are allowed to donate blood now. I immigrated to Israel when I was three years old, so I fall into the category of people who are still discriminated against. I feel like our struggle failed because we only got partial results.

When I got to the Knesset, I thought that I had to continue the struggle. After all, there are thousands of people like me here. Why shouldn’t we be able to donate blood, too? I’m healthy. In the Knesset, my finger is just as valuable as any other finger, so what’s the problem? I haven’t received any serious answers yet. All the answers I got were discriminatory.

I knew the procedures when I went to donate blood in the Knesset, but deep down I hoped that they would let me donate anyway. Two months earlier, when I tried to hold a discussion about the issue with professionals in the field, I left the meeting in shock. A representative from the Health Ministry sat there describing a theory about the "period when Ethiopian men are in heat," referring to some alleged courting period, where they go from one woman to the next. As the granddaughter of a well-respected kes [Ethiopian religious leader], I shriveled up in my chair when I heard him talking about that. Then I got up and slammed down on the table. It became unpleasant, especially since it was a respectable closed forum.

After that incident, I decided to continue the struggle. That is why I went to donate blood in the Knesset, even though I knew that it was an act of provocation. I felt like I had a responsibility toward an entire community, so that it wouldn’t walk around with its head held down. I realized that if I abandon the struggles that harm me directly, I would not be worth anything and moreover, I would be saying that people from Ethiopia aren’t worth anything either.

Tamanu-Shata:  Yes, according to the figures I have, the situation of the Ethiopian community is the worst in the country. They are the poorest sector of the population, even poorer than the Arabs. The rate of suicide in the community is several times higher than among the general population. Some 30% of minors in juvenile detention centers are Ethiopian, and Ethiopians make up 20% of inmates in military prisons. It’s shocking, when you think about it, and those are only some of the figures. It’s even more shocking when you take into consideration that we make up just 1.5% of the total population.

I get the feeling that the state isn’t really doing anything to combat racism. Otherwise, why would they put the Ethiopians in poor, secluded neighborhoods that are just like ghettos? And that is without even mentioning the racist humiliations that take place constantly. Not a day goes by when I don’t receive a request for help. There was the mother of an 8-year-old girl who said that the driver of the school bus told her daughter that she was a monkey that climbed down from a tree. And there are all sorts of stories about the selection process in nightclubs, where Ethiopians are excluded.

I am now promoting a law to double the financial compensation for victims of racism and I am working to establish a commission on equality. There are models for that in other countries, and Finance Minister Yair Lapid has already agreed to provide a budget for it.

Al-Monitor:  Are you bothered by the racism faced by Arabs?

Tamanu-Shata:  It is just as bad. I was furious when they wouldn’t let Arab children into the Superland amusement park. A distinction must be made between a territorial conflict and joint struggles against racism. In that context, I cooperate with the Arab members of Knesset.

It is important for me to add that most Israelis are not racist, and they find these phenomena disgraceful. It seems to me like the state leaves the handling of racism to the courts, but there is also a clear sense of the courts being lax when it comes to dealing with these issues. Trials on these matters generally end with paltry financial compensation, but criminal sanctions are not being implemented.

Al-Monitor:  Have you ever felt racism against you personally as a member of Knesset?

Tamanu-Shata:  A lobbyist once asked one of my aides, “Where’s your nigger?” What it boils down to is that the Knesset reflects our society. That means that I encounter condescension, but I have learned to keep it at bay. What infuriates me is when it happens to children. I can’t stand that. Just recently, there was another story in the news about Ethiopian children in Petach Tikva who were sent to special education for no reason whatsoever. That may not be a case of classic racism, but it is a case of exploiting their weakness and showing distrust in these children, which ultimately seals their fate. I think it’s a crime. It is this kind of hidden discrimination that I want to fight against.