Ethiopian Jews in Israel are losing part of their unique culture in favor of more mainstream practices. 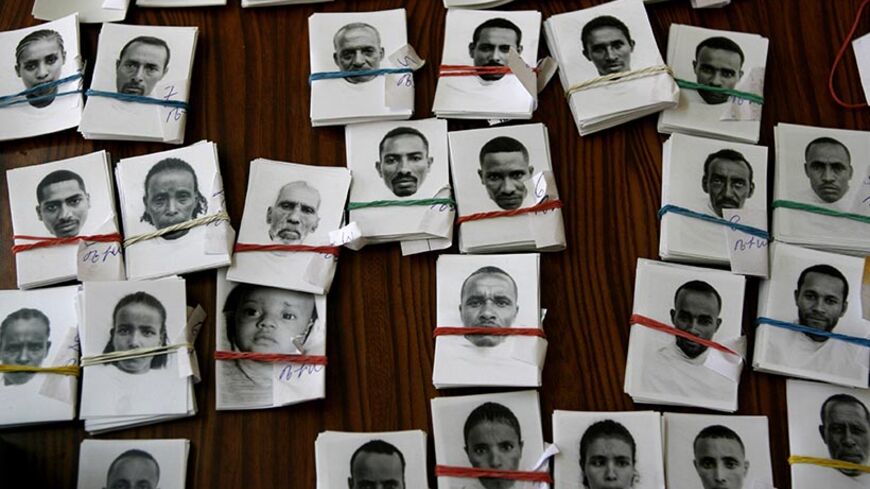 Passport pictures for Ethiopians, who are awaiting immigration to Israel, lie on a table in Gondar, March 8, 2007. - REUTERS/Eliana Aponte

One Ethiopian folktale goes as follows: “A long time ago, Abba Gabra Hanna went to visit the village of Lalibla. Along the way, he met a jolly group. Someone in the group pointed at Abba Gabra Hanna’s large belly and said to his friends, ‘We have to thank this man for bringing with him a large, full bag of seeds. Our empty fields are waiting to be sown.’ The people in the group burst out laughing. Abba Gabra Hanna was insulted, but immediately had a thought. He pointed at the large, shiny bald head of the man and said, ‘I’m not sure if the amount of seeds I brought will be enough for this large, empty field.’ The people in the group burst out laughing. They knew that they had just met Abba Gabra Hanna, the famous joker.”

“For Ethiopian immigrants, Abba Gabra Hanna is the Ethiopian Hershele [a Hasidic joker in Ashkenazi folktales],” said Penina Tamanu-Shata, deputy chair of the Knesset and chair of the lobby for Ethiopians in Israel who came to Israel from Ethiopia when she was three. “There’s a sense that Ethiopian culture is anemic, because our parents weren’t always literate, but the truth is that the literature of Ethiopian Jewry is developed — full of parables and complex and beautiful expressions. It’s simply a different kind of literature that is transmitted orally.”

As has happened many times in Israeli society when the collective has trampled on the unique character of immigrant communities, a large part of the cultural identity of Ethiopian Jewry has simply been erased. A 2013 study found that nearly half of Ethiopian households speak Hebrew only. The richness of Ethiopian folktales has thus been lost to them.

This issue stands at the center of a master’s thesis completed by communication therapist Yaara Sokolovsky on speech patterns between mothers and their children in the Ethiopian community. Under the supervision of professor Dorit Aram, she submitted it to the department of special education and educational counseling at the School of Education at Tel Aviv University

Sokolovsky's research, which will soon appear in the journal Megamot, shows that to enhance interaction between an Ethiopian mother and her children, it is important to preserve the custom of telling folktales, not only to read books. Over the course of six months, Sokolovsky videotaped sessions in which mothers read their children a story from a book as well as told them a folktale by heart. She then transcribed the sessions and carefully looked for points of interaction in each case; for example, the questions the mother asked the child, her attempts to expand the story or discuss its meaning, the extent of the child’s participation and so forth. What she found was that while a book enabled high mutuality, that is, the active participation of the child, the folktale allowed the mother to use a much higher level of speech. Sokolovsky added that the research shows that folktales enable a stronger bond between mother and child.

“These are very important elements for the cognitive development of the child,” said Aram. “The Ethiopian community is based on respect, and it’s not customary to make eye contact with an adult,” she explained. “In this instance, the mothers actually sought eye contact with the child while telling the folktale, because there was no book to distract their attention.”

Tamanu-Shata says that she was brought up on sayings and expressions. “My parents’ generation was quiet and humble, and they preferred transmitting educational messages in a brief and effective way — through sayings, expressions, short parables. In Ethiopia, at the end of the hard workday, leisure was devoted to wordplay, storytelling games, riddles and parables. This was the essence of leisure time for Ethiopian Jewry. It’s a grand culture that we turned our back on, disconnected from. But today it’s reawakening. People are thirsty for this culture.”

This thirst is reflected in the trend of learning Amharic, which is similar to the flourishing of Yiddish of a few years ago. “My niece was born in Israel and didn’t know a word of Amharic,” said Tamanu-Shata, “but now she’s learning it. She wants to give her culture a chance.”

Tamanu-Shata, the mother of two children ages 2 and 4½, doesn’t tell her children folktales, because she doesn’t remember many of them. Yerushalayim Selah immigrated to Israel from Ethiopia at age 4. She is now a 35-year-old teacher from Kibbutz Dvir, a mother to two girls ages 4 and 10 who will soon be joined by another sister. She also does not tell folktales to her daughters.

“I found the values I wish to instill in my daughters in books,” said Selah. “I didn’t feel a deprivation or a need to bring in something else. I choose to connect them as much as possible to the place where they live. For my parents’ generation [storytelling] was very important. They tried to tell us stories. I remember a story or two, especially parables with a moral that were meant to teach correct behavior. Occasionally, I ask them, ‘Do you remember that you told us parables on Fridays?’ Fondly remembering the stories they told creates a connection between me as a mother and my parents. Today, the actual role of folktales in our lives is expressed in the connection between the grandchildren and grandma and grandpa. They tell the girls stories, not because they feel they have to, but intuitively.”

In Israel’s first years, there was a strong taboo against Yiddish. Immigrants from North Africa also suffered scorn and condescension toward their traditional culture. The ethos of “gathering of exiles,” including its downsides, have been studied by many, and like the authors of such studies, Sokolovsky is convinced that marching in lockstep creates problems by trying to fit immigrants into the cultural mold of the indigenous population.

Aram said, “These mothers heard folktales in their childhoods, and when they tell them to their children, they tap depths that are deeper than while reading a book. The Ethiopian community tends to abandon its culture and to move on to new things, even if they are not always their strengths. There’s great importance in their culture of origin, in recognizing the power of this culture and empowering it.”

“We have understood that a lost culture won’t help,” said Tamanu-Shata, summing up, “and adopting a culture that isn’t ours, like African-American culture, won’t either. We are Ethiopian Jews with an Ethiopian Jewish culture, and we must find the bridge between this identity and Israeli identity.”