For Israel's Ethiopian immigrants, the liturgical Ge’ez language is a fading memory used only in religious settings. 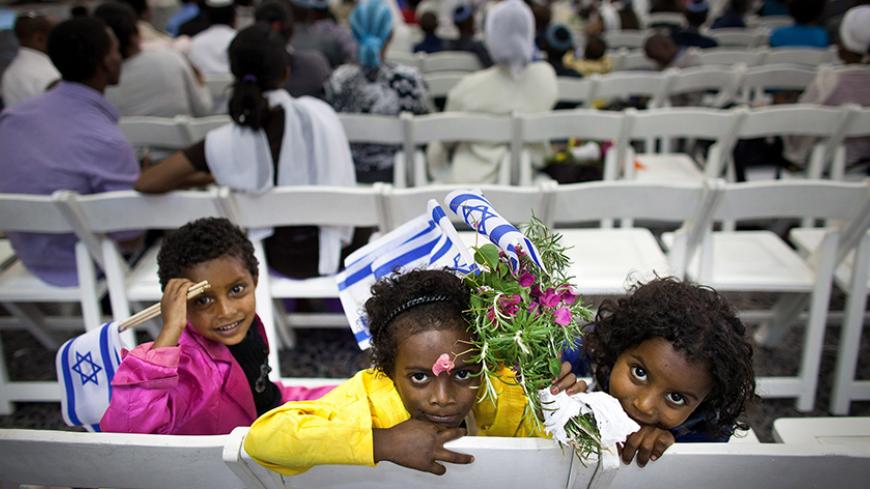 New Jewish immigrants are seen during a welcoming ceremony after arriving on a flight from Ethiopia at Ben-Gurion Airport, near Tel Aviv, Israel, Oct. 29, 2012. - Uriel Sinai/Getty Images

On June 7, another group of about 70 Falash Mura (people of Jewish origin) immigrated to Israel from Ethiopia. Their arrival revived discussions of the preservation of Ethiopian Jewry's ancient traditions, particularly their language, Ge'ez.

Samai Elias, the rabbi or "kes" of the Ethiopian community of Rishon LeTzion and chairman of the Spiritual Council of Kessim (Rabbis), told Al-Monitor, "Ge'ez is not a spoken language at all today. It is the language of our prayers and our Torah scrolls. Kessim learn the language, but as a spoken tongue, it is in danger of immediate extinction. What gives it a longer shelf life is that our prayers are still recited in it. These prayers preserve the language, if only on a low flame."

"You could say that the relative survival of the Ge'ez language could be credited mainly to the Jews of Ethiopia," added Abeje Medhani, the documentation coordinator at the Israeli State Center for Ethiopian Jewish Heritage. He is responsible for various projects working on the preservation, documentation and recognition of the culture and heritage of Ethiopian Jewry. "Although it is a sacred language for the church as well, only we have continued to use it in our prayers for the past thousand years. Knowing Ge'ez is, in effect, the threshold that anyone who wants to become a kes must pass. A kes must know the prayers and the Torah in the Ge'ez language. Modern researchers make frequent use of Jewish materials to study the Ge'ez language. Jewish monks in the 15th century composed the prayers and religious law books of the Jewish community in Ge'ez."

While Ge'ez is being preserved in some way, the Qwara language, which originated in the Qwara province of Ethiopia, has almost completely disappeared, though it was once considered the "Yiddish" (a colloquial and colorful language mix of Hebrew and German) of the Ethiopian Jewish community. "Until a few years ago, elders of the community who arrived from the Qwara region still knew the language, which was once in general use among the Jews of Ethiopia. Missionaries and researchers who visited the region in the 18th and 19th centuries testified that it was used by most Ethiopian Jews," said Medhani. "Today, however, you could say that the language is completely extinct."

Elias added, "The Qwara language is unique to the Jews of Ethiopia. As far as I know, there is no one in the world today who speaks Qwara or even knows Qwara. I am envious of Yiddish, which has enjoyed something of a renaissance and revival recently. I think that in contrast, the fate of Qwara is sealed."

Medhani, who speaks Ge'ez, recently published a Ge'ez prayer book, though according to Ethiopian tradition, prayers are recited by heart and not read. "I reached the conclusion that preserving the language will occur through the liturgy," he said, "if Ge'ez isn't brought back to use." Medhani is now working on an Amharic-Ge'ez dictionary. His dream is to see the first nonreligious text published in Ge'ez.

When asked about why it is so important to preserve the heritage of the Ethiopian exiles once the community immigrates to Israel, Elias stressed, "It is an ancient Jewish heritage that cannot be dismissed."

"We are talking about prayers that were recited by Jews for hundreds of years. Their forms and melodies are unique. They were not copied from other communities or religions. We have a variety of original material. That obligates us to preserve the language. Similarly, the Kaddish prayer is recited in Aramaic, and that has not been changed over the years. We are preserving a heritage," he added.

This desire to preserve Ethiopian culture, especially the Ge'ez language, has intensified in recent years, once the Ethiopian immigrant community became established and started integrating into Israeli society. "With the first waves of immigration, there was a very strong tendency to sever ties with our roots and to distance ourselves from our language and traditions. There were concerns that people would stop praying in that language. Over the last decade, however, there has been something of a return to it and a larger quest for Ethiopian identity," said Medhani.

Elias is convinced that the reason many young Ethiopians are returning to their traditional practices, such as using Ethiopian names and embracing Ge'ez cultural activities, has to do with the discrimination the community faces. "What changed things was the attitude of the government, which refused to recognize the spiritual leadership of the Ethiopian Jewish community. This had a boomerang effect," he explained. "Israel's Chief Rabbinate revoked the authority of the kessim. They are not allowed to perform marriage ceremonies for young members of the community or to grant kosher certification, based on the community's customs and norms. Young people today want to show that the community has not abandoned the kessim. That is the source of the revival of tradition."

Elias added, "We've been in Israel for 30 years now. During the first 15 years, not a single kes was ordained in Israel. In the last 15 years, 30 new kessim, some born in Israel, were ordained. In 2010, the government decided to recognize the 15 kessim who were ordained in Israel and granted them the authority to serve their communities. We are now facing a much bigger struggle, not only to obtain government salaries for them, but also to recognize kessim as Jewish spiritual leaders with authority over matters of marriage and kashrut. Much to our surprise, there was a certain readiness in the government to consider the issue seriously and to give it a voice. They see that the younger generation has no plans to give up."