Minister of Immigration and Absorption Pnina Tamano-Shata presented last week a plan to bring to Israel 8,000 Falash Mura from Ethiopia by the end of 2022. 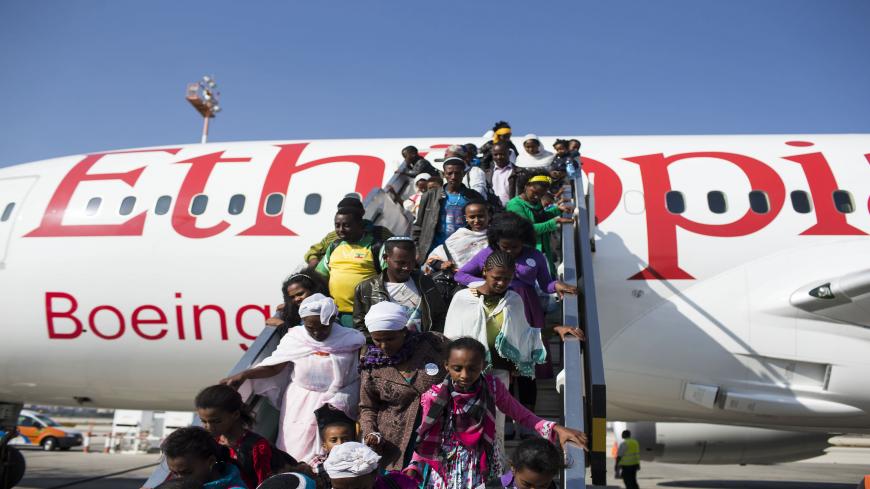 Several thousand Ethiopians are now living in refugee camps in the capital Addis Ababa, waiting to emigrate to Israel. Some of them have been there for many years, from the beginning of the last decade, and all are waiting for the government of Israel to implement its decisions to let anyone who can prove to have relatives in Israel immigrate to the country.

Still, even among Ethiopian Israelis there is disagreement on bringing in the remaining Ethiopians, since most are not Jewish (according to Jewish religious law), but rather relatives or offspring of people who converted from Judaism in the past.

In recent decades, about 40,000 Ethiopians immigrated to Israel. Most of them had maintained their Judaism and are called Beta Israel, and the others — the Falash Mura — are those who converted to Christianity or married Christians, mostly due to persecution and pressure. In other words, some were apparently converted under duress.

In some cases, only partial families immigrated to Israel, and over the years those who came to Israel demanded to be reunited with their family members. In the past decades, several government decisions were made to bring first-degree relations over, but the decisions were only partially implemented, among other reasons because every time it seemed most of the relatives had immigrated, more Ethiopian relatives arrived in the refugee camps.

Today, according to estimates, 8,000 people are in the camps. On Aug. 19, Minister of Immigration and Absorption Pnina Tamano-Shata, herself an immigrant from Ethiopia, presented a draft plan to allow all those waiting there to immigrate to Israel within three years. In a discussion at the Knesset Absorption Committee she said that “all responsible parties have reached the conclusion and understanding that this painful quandary should end.” She suggested that the 8,000 people waiting should emigrate from Ethiopia by the end of 2022; 4,500 of them should be brought to Israel by the end of 2020. She also suggested that in three years the camps should close.

According to the minister, absorption would take place both at absorption centers and directly with the local authorities. In addition, an exceptions committee would be created, headed by a retired judge, with the participation of two kessim (Ethiopian Jewish religious leaders) to examine the eligibility of those waiting, up to second-degree relation. In the framework of understandings with the government of Ethiopia a certain amount of aid would be allocated to those not eligible to emigrate.

David Bitan (Likud), chairman of the Committee for Immigration, Absorption and Diaspora Affairs, opposed the proposed plan and argued that it would enshrine the camps and fill them anew every time. As he sees it, they should be closed, and all those approved to emigrate should be brought to Israel immediately, i.e., those who came to the camps up to the end of 2015. Bitan emphasized that the Jewish Agency stopped working with the communities at Gondar and Addis Ababa seven years ago, and that since then conditions have become very difficult in terms of education, lack of food and welfare and medical services.

But this proposed immigration has opponents among Ethiopian Israelis. The council of kessim addressed a letter to the prime minister, the minister of immigration and absorption, and other ministers, asking that it be charged with deciding whom should be allowed to immigrate, by looking into the Judaism or affinity to Judaism of those waiting in Ethiopia. The letter demands that the 2018 government decision — which stipulated the creation of the council of kessim and giving them authority regarding Ethiopians in Israel — should be enacted. In the letter they asked to institutionalize a conversion process for anyone who wants to come to Israel, for them to oversee the process, and “to put an end to this saga called Falash Mura.”

One of the prominent Ethiopian activists opposed to bringing the Falash Mura and the non-Jewish Ethiopians to Israel is Ayanao Pareda Sanbeto, who wrote on Facebook following the kessim’s letter, “The government of Israel is allowed to bring Muslims and Christians here, but to wrap people up in fringes and prayer shawls and all of the symbols sacred to the Jewish people and to define them as Jews is a disgrace to our Judaism. The Minister of Absorption and Immigration wants and is acting to bring Christian missionaries from Ethiopia. She does not want the kessim, the rabbis and elders of communities to check who is from the seed of Israel, because if the kessim and elders check those missionaries she wants to bring over they won’t come. She is thus betraying the heritage of her forefathers.”

Sanbeto told Al-Monitor that the acts of the minister of immigration and absorption constitute a divorce certificate from the heritage of her forefathers and a humiliation of its spiritual leaders in the public eye. He argues that she succumbed to the pressure of missionary organizations.

Shalom Sharon, a community rabbi and senior lecturer at the Kiryat Ono Academic College, also an immigrant from Ethiopia, partly supports this position. According to him, the government of Israel over the years has given in to pressure and protests to bring those waiting in Ethiopia, but hasn’t implemented these decisions. He rejects the claim that those waiting should be brought here for humanitarian reasons and calls for the Law of Return (enabling a person born to a Jewish father or mother to immigrate to Israel and become citizen) to be put in force, i.e., allow only eligible Jews to immigrate.

“As immigrants from Russia are not allowed to bring with them all their gentile relatives, the same should apply here, and anyone who’s not Jewish should be informed that he can’t immigrate and should return to where he came from," Sharon told Al-Monitor. He supports the demand of the kessim to be involved in the process. “They treat the community and its elders with paternalism here,” he added.

Minister Tamano-Shata rejects the criticism and said that Sanbeto represents a very small part of the community and that the large majority supports her. She explains that in light of the kessim’s letter, she directed the creation of an appeals committee to check anyone whose case is doubtful, on which two kessim would serve. According to her, the most important thing is to make sure to quickly bring all those eligible and provide a final answer to anyone who is in doubt.

According to testimony she received, there are about 500 children in the camps, and they live in a state of undernourishment, since aid from Israel and the Jewish Agency has been delayed because of the coronavirus pandemic, and all emissaries who were there returned to Israel. She noted that after they sent the letter the kessim already announced that they agree to her plan.

But despite the presentation of the plan, the great financial cost of absorbing all 8,000 people waiting is about half a billion Israeli shekels ($147 million), which is the main obstacle. In Israel’s current political and economic crisis, obtaining such a sum is especially problematic, and the expectation is that the slow pace of their immigration will continue — only a few hundred a year.