After years of waiting, Ethiopian Jews arrive to Israel

One hundred Ethiopian Jews are set to arrive to Israel today, as part of Operation Rock of Israel that was launched yesterday, to bring home 2,000 members of the community. 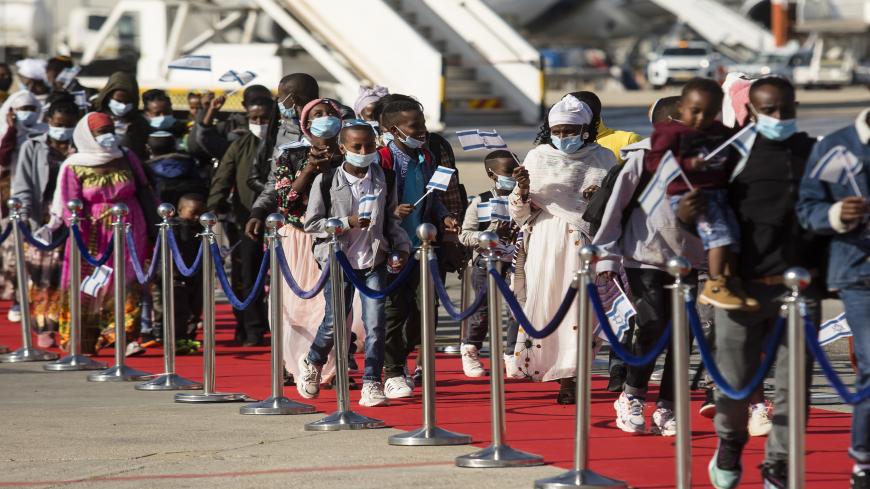 Jewish Ethiopian immigrants walk on a red carpet upon landing in Israel on a special flight from Ethiopia, in Tel Aviv, Israel, Dec. 3, 2020.

On Dec. 3, 316 Jews from Ethiopia arrived at Ben Gurion Airport as part of Operation Rock of Israel (Tzur Israel). One hundred more immigrants are set to arrive Dec. 4. In all, the government is committed to bringing 2,000 community members to Israel, after many years of waiting in transition camps in Addis Ababa and Gondar in Ethiopia.

First to step out of the aircraft was a religious leader of the community, blowing a ram’s horn, as in the Jewish tradition in times of redemption. Many of the immigrants waved Israeli flags. Some of the passengers kissed the ground upon arrival, also a tradition when first reaching the Holy Land.

The new arrivals were greeted at the airport by Prime Minister Benjamin Netanyahu, Foreign Minister Gabi Ashkenazi, Defense Minister Benny Gantz, Chairman of the Jewish Agency Isaac Herzog and other senior government officials. For many, these festive sights were reminiscent of the big waves of Ethiopian immigrants brought to Israel in the 1980s and 1990s.

"I can't remember being so moved by such a distilled sight of Zionism that demonstrates all our qualities. The sight of olim [immigrants] getting off the plane carrying baskets as I remember from my childhood — touching the ground of the Land of Israel, a mother kissing the ground — this is the essence of the Jewish and Zionist story and that is why, our brothers and sisters, we are excited to welcome you here. Welcome to the State of Israel. … The Ethiopian community is returning to the motherland, step by step," said Netanyahu. He later tweeted, "Brothers and sisters of ours, immigrants from Ethiopia, we are so moved to welcome you here. Welcome to Israel!"

When speaking on the tarmac, Netanyahu also pledged to continue his efforts to bring back home Israeli-Ethiopian Avera Avraham Mengistu, held by Hamas in the Gaza Strip since 2015. Mengistu suffers from mental health problems.

Absorption and Immigration Minister Pnina Tamano-Shata arrived to Ethiopia last week to prepare the operation, and accompanied the immigrants on the flight. She arrived to Israel from Ethiopia as a child with Operation Moses in 1984, which brought more than 6,000 Ethiopian Jews to the country trhough Sudan.

Gantz called Tamano-Shata a few hours before departing from the airport in Addis Ababa to express his support of the operation, tweeting, "Politics should be put aside. Tomorrow Minister Pnina Tamano-Shata will return to Israel with hundreds of immigrants from Ethiopia. After years of delay they will be able to unite with their children, brothers and sisters, whom they did not see for years. They could at last unite — this time in Israel. I am very moved by this. It’s a great pride. Pnina — I am so proud of you. Well done!"

On the tarmac, Gantz recalled that as an Israel Defense Forces officer he had participated in the military’s covert Solomon Operation in 1991 to bring 14,000 Ethiopian Jews to Israel. Another operation in 2013 brought 7,000 immigrants from Ethiopia.

Israeli-Ethiopian activists have demonstrated in the past few years relentlessly, demanding that the government stop dragging its feet in implementing a 2015 decision to bring all remaining Ethiopians of Jewish lineage to Israel within five years. According to assessments by the activists, between 7,000 and 12,000 Ethiopian Jews remain behind in Ethiopia, some of whom have been waiting for years to reunite with their families. Activists have been increasingly worried about the fate of the people in transition camps, as Ethiopia is confronted with an insurgence of insecurity and poverty. Over the years, some ultra-Orthodox leaders cast doubts on the Jewishness of the immigrants. Netanyahu pledged before the last elections to bring them home as part of a family unification operation.