Israel's smartest student is an Arab

Israeli-Arab Mohammed Zeidan was this year's only student to achieve the highest possible score on Israel's college entrance exam. 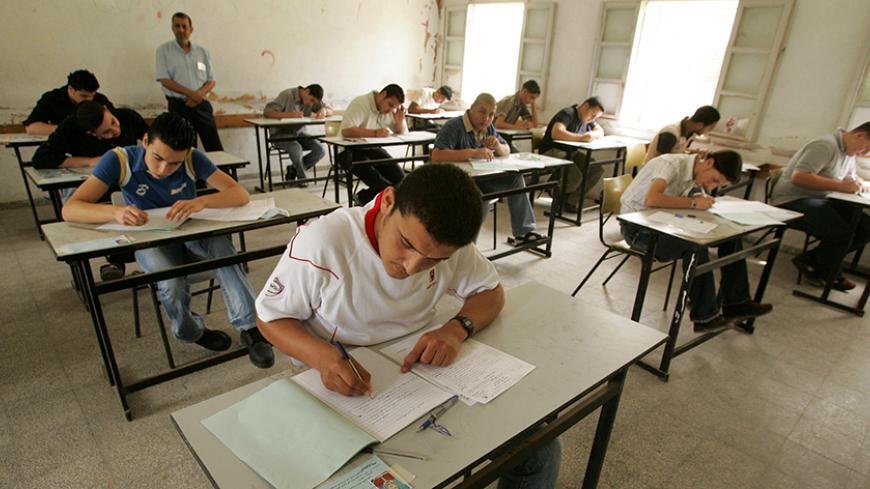 Palestinian students take their final exams at a school in the Gaza Strip, June 11, 2007. - REUTERS/Mohammed Salem

Mohammed Zeidan, from the Arab community of Kafr Manda in northern Israel, is the only Arab in Israel who has been able to get the ultranationalist Education Minister Naftali Bennett and Arab Knesset member Ahmad Tibi from the Joint List to exchange warm greetings. Zeidan, 19, scored an 800 on Israeli's Psychometric Entrance Test, the highest possible score. Tibi praised his achievement on Twitter, and Bennett was quick to retweet Tibi’s greeting, leading the two political foes to exchange kind words.

When I told him about Tibi and Bennett's exchange, Zeidan smiled broadly. But that’s not the only reason he is on cloud nine. According to the National Institute for Testing and Evaluation, which conducts the exam, Zeidan’s achievement is overwhelming. To explain:

In 2014, the most recent time that the National Institute released such comprehensive data, 65,000 students were examined at a spread of five testing dates. Generally, the best results are attributed the 800 score, and these results then constitute the maximum score level. The other results are calculated according to this maximum level. Another interesting data point concerns the percentage of students taking the test in Arabic, a figure that's usually higher than the percentage of Arabs in the Israeli population. In 2014, for instance, more than 20,000 students took the test in Arabic, compared with some 40,000 taking it in Hebrew. (The other 5,000 took the test in other languages.) Arab-Israelis make up about a fifth of the Israeli population.

The reason behind this impressive figure is the pressure exerted by family and social circles over Arab-Israeli youths to acquire higher education, the only means for them to integrate into the Israeli work market. In the last five years, only two examinees in Arabic reached the highest score — both from the same school where Zeidan is currently studying.

Making this achievement even more impressive, the young Arab-Israeli comes from a small northern village that is struggling to improve the quality of life of its residents. Located at the foot of Mount Atzmon, Kafr Manda has a population of some 18,000 from 30 clans. The rivalries between those clans have resulted in great tension among the residents, who suffer whenever there is an internal feud. On April 28, police were dispatched to the village to disperse a riot that erupted against the backdrop of local elections scheduled to take place there. Meanwhile, an ad hoc committee set up to replace the underperforming elected municipal officials oversees the community’s affairs. The constant tension takes a toll on education, and so Zeidan’s family decided that once he graduated from elementary school he would attend the nearby Mar Elias high school in the locality of I’billin, highly sought after in the Arab sector for the academic achievements of its students.

In an interview with Al-Monitor, Zeidan relates that he plans to study electrical engineering at the Technion (Israel Institute of Technology) and progress to software engineering at a later stage. He believes that degrees in these fields will make it easy for him to find a job, move up and stand out — even in Israeli society, where it is hard for Arab-Israelis to integrate. Zeidan’s father is a gynecologist and his mother is a teacher. His sister is a medical student at the Technion.

“My sister shouldn’t have a problem [fitting in],” he says. “Doctors, by virtue of their profession, help people in the State of Israel or anywhere else in the world. They don’t do anything bad, which is why they are socially acceptable.” He remains unfazed by the remarks made by the wife of Knesset member Bezalel Smotrich (HaBayit HaYehudi), who said she would rather not have an Arab doctor tend to her babies. “This is very extreme. It’s very bad, but we shouldn’t take it as an example and we shouldn’t take it too seriously,” he says.

Zeidan studied with 20 other students from Kafr Manda, who also enjoyed optimal preparation for adult life. For young Arabs in Israel, there’s nothing more important than providing them with tools they can use to overcome the hurdles Israeli society puts before them. “Students can study where they are, in Kafr Manda, too. Good students can also make it on their own anywhere. But at Mar Elias, they prepared us for life. It’s another [learning] culture from another world,” he adds.

Al-Monitor:  Did studying in such a school help you to do so well on an exam designed to test the knowledge of an Israeli student attending a typical Jewish school?

Zeidan:  When Knesset member Ahmed Tibi called to congratulate me, he said that the test was culture-dependent. In other words, it has to do with the culture you come from. But I hated to tell him that it has nothing to do with it. It doesn’t reflect intelligence, either. It only reflects the time you put into it. The harder you work, the more you’ll succeed.

Al-Monitor:  What does the future in Israel hold for you and for your village peers?

Zeidan:  From what I’ve heard, I can’t get any job I want. It’s a bit political but it’s a fact. You can have a certain job but some places will make you feel like you don’t belong. I don’t know if that’s true but there are a lot of people who’ve tried, and that’s what they are saying.

Al-Monitor:  Do some people ignore how much you can contribute to Israeli society?

Zeidan:  Indeed, I can contribute to my country and to my village. I have no issues with the State of Israel. I feel that it’s my country. If, for example, the State of Israel did not exist and there were an Arab state in its stead, it wouldn’t feel the same. It wouldn’t be the same state and we — Arabs — wouldn’t be in the same situation. It could have been much worse, but let’s not go too much into that. You know what I’m getting at.

Al-Monitor:  But aren't you saying at the same time that Israeli society doesn’t accept you?

Zeidan:  That’s true, so I’ve heard. Even if you want to integrate into Israeli society, you can’t as an Arab. I haven’t experienced that. I haven’t encountered racist remarks, but I did see how Arabs were being mocked.

Al-Monitor:  Have you ever had any direct interaction with young Jews?

Zeidan:  Very little. I was training for two months with some Jewish youths in Misgav Am [a kibbutz in northern Israel]. The coach was also Jewish. They were wonderful people. I never ran into any extremists and they were even happy when I joined them. But that was the first time that I actually interacted with Jewish Israeli youth.

Zeidan:  Yes, and it’s a shame you don’t get to meet Israeli Jewish people until you turn 18. That’s really bad. Jews and Arabs don’t mix, and that’s bad. Hopefully that will change in 10 years.

Zeidan:  After scoring 800, I’ve recalculated. This is a very good opportunity that comes once in a lifetime.