Palestinian peace activist Ziad Abed Sabateen recounts how his son was arrested by IDF soldiers in the middle of the night. 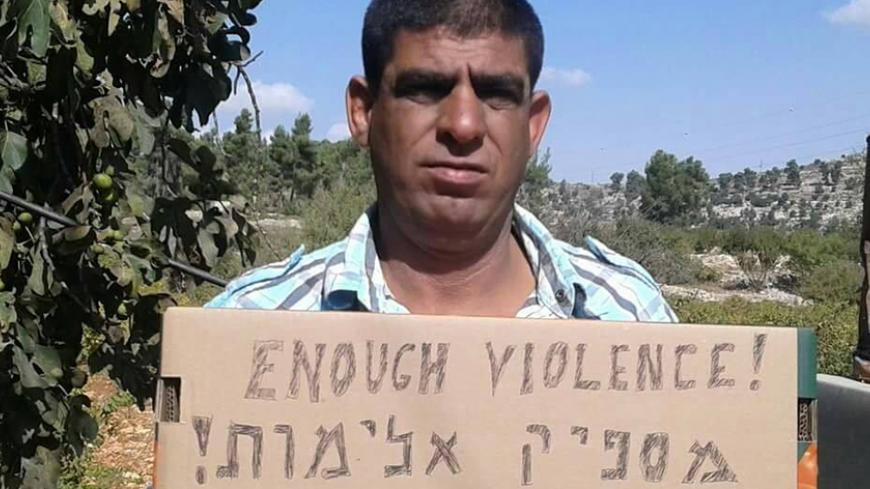 Ziad Abed Sabateen, a resident of the village of Husan located between the Jewish settlement Tzur Hadassah and the Palestinian town of Bethlehem, is one of the most recognized and longtime Palestinian peace activists. For the last 18 years, he has been a relentless warrior for peace, leaving no stone unturned to persuade his friends, neighbors, fellow villagers, nearby residents and anyone else for that matter — Palestinians and Israelis alike — that there is no alternative but the road of peace.

Sabateen was a student of the late Rabbi Menachem Froman from the settlement Tekoa through whom he befriended his neighbors — the settlers in the Etzion settlement bloc. His ardent passion to solve the Israeli-Palestinian conflict without violence rubbed off on them as well.

One night at the beginning of November, at around 2 a.m., Sabateen was rudely awakened by heavy pounding on the door and voices shouting "Open up, open up." When he opened the door, which was just shy of falling off its hinges, some 30 armed soldiers stormed in. According to him, they wanted to arrest his son Mohammed, claiming he had been throwing stones. Mohammed, 15, was taken from his bed in bewilderment. With a great deal of pleading, his father was able to convince the military commander of the unit that broke into the house to let his son get dressed before arresting him. Ever since that incident, he has been fighting for his son as well as for his own reputation, honor and the peace endeavors he has been pursuing for about two decades.

Sabateen is waging a three-pronged struggle: to get his son released from detention; to take care of his children who have been traumatized by the soldiers raiding their house with weapons drawn; and to convince his friends, neighbors and fellow villagers that he was not wrong to choose the path of peace.

The interview with Sabateen is presented verbatim, except for some minor editing. During the interview he is unable to hold back his tears, finding it very difficult to relive the moments of horror and trauma his children went through. Yet, he finds it important that Israelis hear his story — a man of peace who was confronted in his home by an unexpected war machine that confronted the family.

“At 2 in the morning I hear loud banging on the door. It sounded like all hell had broken loose,” Sabateen tells Al-Monitor. “I woke up from my sleep. Soldiers were shouting, 'Open up, open up.' I rushed to the door, opened it and some 30 soldiers pushed me aside and walked in. I was in my underwear and they wouldn’t let me get dressed. ‘What’s going on?’ I asked. ‘Stand up and shut your mouth,’ the officer told me, pushing me against the wall. ‘Where’s the children’s room?’ I have five children — three girls and two boys. I didn’t want to let them go into the girls’ rooms, but they did anyway. Then they moved to the boys’ room. One is seven and the other is 15. They woke them up with their weapons drawn. ‘Where’s Mohammed?’ the officer asked, ‘I want him.’ I asked him why and the officer replied, ‘The interrogators want him. Tomorrow morning I’ll have him released for you.’ They wanted to take him out of bed just like that without his clothes on. I told him, ‘Sir, you’re a role model to the soldiers, to the IDF [Israel Defense Forces], to Israel. I’m asking of you, I want to give my son his clothes to wear like a decent human being, don’t take him without his clothes on. Let his mother say goodbye to him.’ In the end he agreed.”

Al-Monitor asked for a reaction from the IDF, the Shin Bet and the Israeli police, but at the time of publication had yet to receive a response.

Al-Monitor:  Did you understand why they were taking Mohammed?

Sabateen:  I was told he was wanted for questioning.

Al-Monitor:  How did the children take it?

Sabateen:  Everybody at home was crying and shouting. Since then the children have been having problems. But I took care of it. You want to know how? I took my seven-year-old to the soldiers. I asked of my Israeli friends to ask the soldiers at the crossing to let my son come to them to say hi so that he wouldn’t be traumatized for the rest of his life. I wanted him to calm down so his soul wouldn’t be scarred for life.

Al-Monitor:  What is the situation now with Mohammed?

Sabateen:  After taking my little boy to see the soldiers I hired a lawyer. The following day he met with my son and told me, "Your son has two broken teeth and bruises on his head. They grabbed his head and smashed it against the wall. Four interrogators." That’s what he [my son] told the lawyer.

I’ve been a public figure for 18 years. I’ve been featured in movies and held workshops. I have more than 5,000 friends on Facebook. The people from the Etzion [settlement] bloc — known right-wingers — I know them and I work on a lot of peace initiatives with them. We organized many encounters and many joint activities. I bring Arab residents to meet with Israelis for the first time in their life. I tell them, "See? This is the Israeli side. We are people, they are people, we are all human beings. And there's nothing more precious than life. Why should we get to a situation where you end up killing me and I end up killing you? Why use violence?" This is how I convince people. And this is what I get in return? This is how they repay me? Why did they hurt my family? Why? Why?

You know, a week before they broke into my home and arrested Mohammed, me and my friends from the Etzion bloc planned to call on roadblocks and bus stops for soldiers and hand out flowers and cookies and talk to them about peace.

Al-Monitor:  Have you attended the court proceedings?

Sabateen: [holding back tears again] During the remand I said to the judge, "My son is 15; they interrogated him for 4½ hours. They told him: 'You threw a stone.’ Four men descend on a 15-year-old. My son said to the judge: ‘Your Honor, I’ve been beaten to a pulp and that’s what came out: OK, I threw a stone. Luckily I didn’t blurt out anything about a gun or firebomb.’"

Al-Monitor:  People who are familiar with your peace activity, what are they saying to you?

Sabateen:  A lot of people come up to me to hold my hand and then they say, "Here, look at you. Where are you and where’s your peace?" But I don’t let anyone go there. I tell them that it’s the other way around: This only strengthens me; we mustn’t go back. It pushes me to move forward. You need to believe that the path forward is the path of peace. I show them that I haven’t given up on my way and that I wasn’t wrong. Every day Israelis come to me to show their support, even people from Tzur Hadassah. My home is always open and it’s a home of peace. It will always stay a home of peace.