In an interview with Al-Monitor, former Shin Bet head and current Science Minister Yaakov Peri calls to seize this moment after the Gaza war for a regional diplomatic move involving the Palestinians, Saudi Arabia and Egypt. 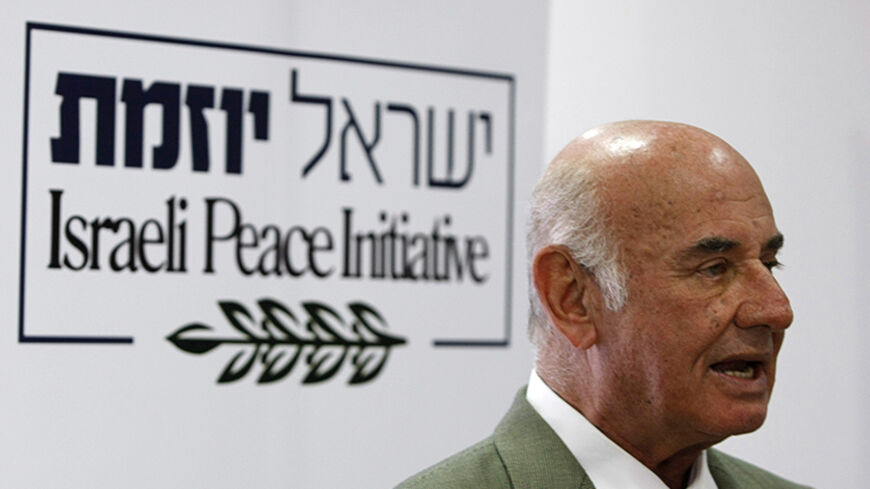 The diplomatic initiative presented Aug. 11 by Yesh Atid Chairman and Finance Minister Yair Lapid was based on an action plan formulated by a fellow party member, former Shin Bet head and Minister of Science, Technology and Space Yaakov Peri. The plan calls to convene a regional summit, to demilitarize Gaza and transfer its control to Palestinian President Mahmoud Abbas. From Lapid’s standpoint, it enables him to establish a position in the diplomatic-security realm.

Peri was recruited by Lapid in the last election as the senior diplomatic-security figure in the new party, but until the current conflict with Hamas, Yesh Atid was drawn toward an economic-social agenda and Peri’s role hasn’t been realized. Operation Protective Edge returned the former head of the Shin Bet to the nerve center of decision-making — the diplomatic-security Cabinet, where he serves as an observer. Much has been said about the inexperienced Cabinet with which Prime Minister Benjamin Netanyahu embarked on a war in Gaza, and in this respect, Peri has become an important and balancing element in the long deliberations.

Yesh Atid’s initiative, which as mentioned, is based on Peri’s framework, seems on the face of it a timely use of the new regional order that is forming for Israel’s interests. The problem is that with the existing makeup of the coalition, with the Cabinet’s battles over the agenda and small political calculations, the possibility that the prime minister would adopt it is minuscule. On the extremes, the chances that Economy and Trade Minister Naftali Bennett and Foreign Minister Avigdor Liberman would stand behind it are completely unrealistic.

Nonetheless, the fact that someone in the government with the political clout of 19 seats has put a diplomatic plan on the table is important on the day after the cease-fire. In an interview with Al-Monitor, Peri actually sounds optimistic regarding the political feasibility of the plan.

Al-Monitor:  What is the Israeli interest in Yesh Atid’s plan? The Labor Party has already attacked you, saying that the plan does not talk about an agreement between us and the Palestinians.

Peri:  I’m convinced that in the current conflict, beyond the losses and destruction, opportunities have arisen that the Israeli government can and should seize. It’s clear to everyone that the creation of a strategic alliance with Egypt is an Israeli interest. There’s a new and determined president there, who is successfully handling very deep problems. We have the same interests on a range of issues, including on Hamas.

We are in a situation where even those within the Cabinet, who saw Mahmoud Abbas the epitome of all that’s negative, have reached the conclusion that we have to give him a foothold in Gaza because that’s the lesser evil in their view.

The third thing is the axis of nations, starting with the emirates — excluding Qatar, of course — which passes through the Saudis, reaches Egypt, Jordan and the Palestinian Authority. It's an axis of nations that share, as of today, several common interests: fighting radical Islam like that of [the Islamic State], which all of the Middle East fears, the Muslim Brotherhood, Hamas, as well as the Iranian issue. There’s also Egypt and Saudi Arabia, who are not happy with Turkey’s hegemony in the Arab world.

An opportunity has thus arisen for a three-step process whose beginning is a cease-fire. In the second step we think that Egypt should convene a regional summit for a deep rehabilitation of Gaza, while on the other side of the equation, Israel will demand demilitarization and the prevention of Hamas from growing stronger.

No one deludes himself that Hamas will willingly dismantle the tunnels and launchers we don’t know about and volunteer to demilitarize, but I think that an opportunity has been created to force it on it.

As a result of the second step, we think that there’s an opportunity to move toward a regional process with two key components. The first is to insert the negotiations between Israel and the Palestinians into a bilateral track. We all know that all sides have failed, but there’s no point in dealing with who’s to blame. The blame is shared by both sides. I believe that such a framework will make it easier for the Palestinians to be a part of a regional process with the backing of the significant Arab countries, who bring with them an economic toolbox. And within the same process, we can start talking.

As for the criticism from the Labor Party, I say that there’s no reason to rush into talking about ending the conflict; we don’t have to set a deadline. We can use existing frameworks like the Saudi initiative and the declarations of King Abdullah [of Jordan] to defuse the problematic issues of the refugee problem and to move forward.

Al-Monitor:  Is Netanyahu there? Will he support this?

Peri:  I will say honestly, that I’m not sure that our prime minister will rush to initiate such a move, but Egypt and Saudi Arabia could be called upon to initiate it. Such a move is an opportunity that Israel must consider seriously; otherwise, after this round [of fighting] will come another round. Now there is definitely an opportunity for a comprehensive diplomatic process.

Such a process will create an axis of moderate countries with shared interests, will bring Israel and the Palestinians into a framework and bring them closer to the Arab countries. We do not set a schedule, and we do not say the negotiations will last nine months. Rather, we’re talking about gradual processes. The international community, despite its harsh criticism, will favor accepting such a three-step process, including an American umbrella and aid from the Quartet. Egypt will be the host country. It could suit everyone.

Al-Monitor:  You’re talking about a historic opportunity. In your view, was it impossible to reach an agreement with the Palestinians over the recent years?

Peri:  I’m one of those who think that it was possible to reach significant progress with the Palestinians earlier. The Palestinians made mistakes and we aren’t clean, either. When I was head of the Shin Bet I argued that [late PLO leader] Yasser Arafat would never sign a peace agreement with us. This was because in the structure of his personality there were elements that pointed to his bringing the Palestinian issue to the world’s awareness and that this would be his historical role. Of course the two main sides, us and the Palestinians, will have to accept all sorts of limitations. Israel will have to declare a freeze on settlements, and the Palestinian side will have to commit to freezing the applications to international institutions.

Al-Monitor:  The chance that the current coalition would accept a plan like this, proposed by Yesh Atid, is miniscule to say the least.

Peri:  I think it’s possible. After all, we are not being asked to leave settlements. In my opinion, such a process will not dismantle the current government, it’s possible politically and regionally. Conditions have ripened. We have to look at the Saudi royal family, at Egypt and at [Turkey's President-elect Recep Tayyip] Erdogan and Qatar’s efforts to insert themselves into the talks. For the first time, conditions have clearly ripened.

Al-Monitor:  Netanyahu would agree to adopt the diplomatic initiative of a political rival like Lapid and thus build him up?

Peri:  We took the situation that was created, the regional structure that exists today, and associated it with a situation that emerges out of a military conflict and humanitarian problems. It’s the right move at the right time. I assume it won’t be easy, but I’m optimistic regarding Netanyahu. My sense is that we are looking for a resolution.

Al-Monitor:  The Cabinet has experienced a transformation of consciousness.

Peri:  I wouldn’t call it a transformation, but rather a more sober view of reality, both of the region and our immediate neighbors. Part of it stems from the shock of the discovery of the tunnels, when they understood that there’s a lower Gaza and the purpose of its creation. What we suggest is really not shooting from the hip, but an understanding that a regional process is necessary. The more you get down to reality, the more you understand the advantages.

I believe that the more you talk and meet, you get to form personal connections and trust that enable you to discuss any issue. Every business and government organization has a thing that’s called risk management, and when Israel starts this process, it will see that if the process succeeds, it will change the region and change history.

And there’s a word that I’ve used sparingly of late: It could spark hope. After all, we have become a frustrated country, and for the Palestinians, the level of frustration is also very high.

Al-Monitor:  Do Mahmoud Abbas and Netanyahu still have a chance after all the bad blood between them?

Peri:  That’s the big question, and I believe that they do. It’s dependent on the situation, and our plan enables it to happen because, God forbid, in a situation of failure, no one would have to pay the price of his seat. I’ve gotten to know politics in the last year, and I understand that when there’s no threat to the job, it’s easier to embark on such a process. There’s only win-win here. If it doesn’t succeed, we made another attempt.

Al-Monitor:  Tell me, have we failed to understand Hamas?

Peri:  No. What Hamas did during the cease-fires was intended to show that it’s in control. It wanted to drag us into Gaza, and it’s a fact that we haven’t been dragged in as of this time. Netanyahu and the Cabinet acted with restraint and with judgment.

Al-Monitor:  Did the chief of staff make a mistake in calling on residents of the south to return to their homes?

Peri:  I have a lot of admiration for Gantz. He’s an excellent officer, but at some point it shouldn’t have been said “go home,” because formally, we didn’t declare the end of Operation Protective Edge. It came out of the desire to broadcast optimism and strength. The same thing could have been said without saying “go home.” It was the residents’ decision to leave, and so it would have been better if it wasn’t said.