Knesset member and former general Amram Mitzna contends that Israel faces no immediate threats in the region, and should use this window of opportunity to jump-start negotiations with Palestine. 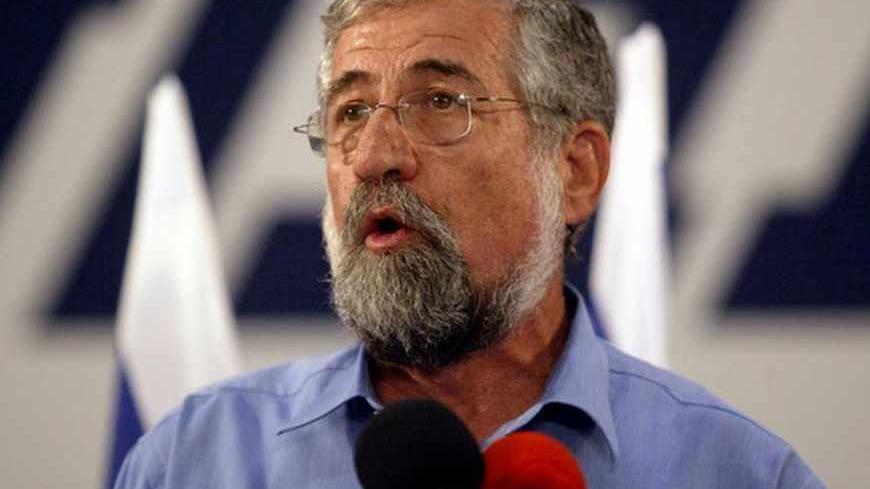 Amram Mitzna speaks during a press conference in Tel Aviv, May 4, 2003. - REUTERS/Nir Elias

The chairman of the Knesset’s Education, Culture and Sports Committee, Knesset member Amram Mitzna, has in recent weeks racked up long hours of loaded discussions with the heads of the ultra-Orthodox parties. This effort was part of preparing the legislation that is supposed to cut the budgets of ultra-Orthodox educational institutions that do not teach core subjects.

The new legislation, spearheaded by Finance Minister Yair Lapid’s Yesh Atid party, also includes the cancellation of the Nahari Law, which obligates local authorities to fund unofficial educational institutions, a move viewed by the ultra-Orthodox community as persecution. As far as the ultra-Orthodox are concerned, this is one of the most trying periods in recent decades. Not only were they kicked out of the government to make room for Lapid, but they were also unable to block the Equal Burden Law. Now they face budget cuts to their educational institutions.

While Mitzna supports the amended legislation, he is finding that he is beginning to understand the ultra-Orthodox. “To a great extent, they justifiably feel persecuted, because things could have been done differently,” he said in an interview with Al-Monitor.

According to Mitzna, Lapid is contributing to the bad atmosphere and is unjustifiably increasing the ultra-Orthodox sense of frustration and alienation from general society.

Mitzna:  Unfortunately, Lapid is not sensitive enough to how difficult these changes are for them. This can be seen in all kinds of statements he has made in recent weeks. His interaction with them is cynical, and the result is that beyond the measures being taken against them, there is no sense that anybody is showing any sensitivity to their situation.

Al-Monitor:  There is no nice way to make these legislative amendments.

Mitzna:  That’s not true. I’m also a proponent of these steps, but they can be made without cynicism. While it’s true that the rhetoric of the ultra-Orthodox toward the secular Jews and Yesh Atid party is not nice, because Yesh Atid now holds the power and authority they need to be more attentive, more sensitive and more understanding. They need to understand that the revolutions they are imposing on the ultra-Orthodox are not simple.

Al-Monitor:  Based on your impression, what are the ultra-Orthodox feeling?

Mitzna:  The atmosphere is tense. I’ve been meeting with them quite a bit in the Education Committee, listening to them and trying to explain the goals of this revolution. The way they see it, integration means opening themselves up, taking down the walls and being exposed to life outside the ghettos, and they are afraid.

What’s going on now is a battle for control of public education. The budgets not allocated to institutions that don’t teach core subjects will not go back to the Ministry of Finance; they will remain in the ultra-Orthodox system and go to those who teach the subjects. This is a strategy to strengthen public education, and it’s important.

Al-Monitor:  To what extent do the political leanings of the minister of education affect the system?

Mitzna:  It’s commonly known that policy changes along with the minister. Former education minister [and current Minister of the Interior] Gideon Sa'ar focused on the exams and very heavily emphasized achievements and international exams. He also stressed Jewish awareness such as visits to Hebron and Jerusalem. Education Minister Shai Piron, in contrast, is on the other end of the spectrum. He gives priority and attributes importance to social issues and values, mutual responsibility. He focuses less on achievements and grades. I clearly believe that the truth should be somewhere in the middle.

Al-Monitor:  What are your impressions of the minister of education?

Mitzna:  My sense is that Shai Piron is not political, and he isn’t looking for headlines of reform. He is honestly interested in education. He is very attentive, he cares about people.

Al-Monitor:  We can’t help but ask you about the faltering diplomatic process. You are a member of HaTenua party, and that is their main cause. For years you have been calling for negotiations with the Palestinians, and things seem to be stuck.

Mitzna:  I’m fed by the information I receive from Justice Minister Tzipi Livni, and she keeps telling me that she believes Bibi [Prime Minister Benjamin Netanyahu] is interested in renewing the talks. He is evidently being tough with all kinds of demands, but he wants to hold talks. He isn’t playing games here. I believe that to a certain degree the Palestinians are dragging their feet more than we are. The Palestinians are evidently being tougher. The only light at the end of the tunnel is [US] Secretary of State John Kerry.

Al-Monitor:  And if nothing moves forward and you discover that you are Netanyahu’s fig leaf?

Mitzna:  I would rather be optimistic, despite the fact that it doesn’t look very good now. If we reach the conclusion that there is really no chance and that things aren’t going anywhere, my personal opinion is that we will need to leave the government. We still haven’t used that whip. I don’t think Tzipi has said to Bibi, 'Listen, if you don’t move forward, we’ll …,' but I’m sure that it’s there somewhere and we’ll need to make a decision. This government has only 68 members of  the Knesset. If we leave, there will be six fewer, and that’s not easy.

Al-Monitor:  Hand on heart, do you believe that Netanyahu can lead a political move along with HaBayit HaYehudi?

Mitzna:  I’m trying to be optimistic, there’s a chance for a positive dynamic to develop. After all, in the Knesset there is a majority for a diplomatic process. Theoretically, HaBayit HaYehudi party could be removed from the government and Labor could step in along with external support from Meretz. In other words, it very much depends on Netanyahu. If he really wants it and decides to pull a [former Prime Minister Ariel] Sharon-like move, he can do it.

Al-Monitor:  Do you think he’ll do it?

Mitzna:  I admit that rationally it’s hard for me to believe, but I do hope it will happen.

Al-Monitor:  Wearing your hat as a military man, to what degree will recent events in Egypt have an effect on us?

Mitzna:  In the short and medium term, there is no military threat to Israel. There is the threat of terror, but I don’t think it will be in the immediate term. The Egyptians are occupied with their own affairs and will be for some time. All kinds of terror groups may spring up in Sinai, but there, too, the Muslim Brotherhood has enough reasons to clash with the government and not to open another front against us. In short, in the coming years there is no military threat to Israel, which forces us to take advantage of this window of opportunity to move the process with the Palestinians forward.