Next Israeli Government Will Be 'Short Term,' Says Knesset Member

Knesset member Moshe Gafni from the ultra-Orthodox Yahadut HaTorah party explains to Mazal Mualem the failings of both Yesh Atid leader Yair Lapid and HaBayit HaYehudi Chairman Naftali Bennett, predicting political disaster if they are included in the next Israeli government. 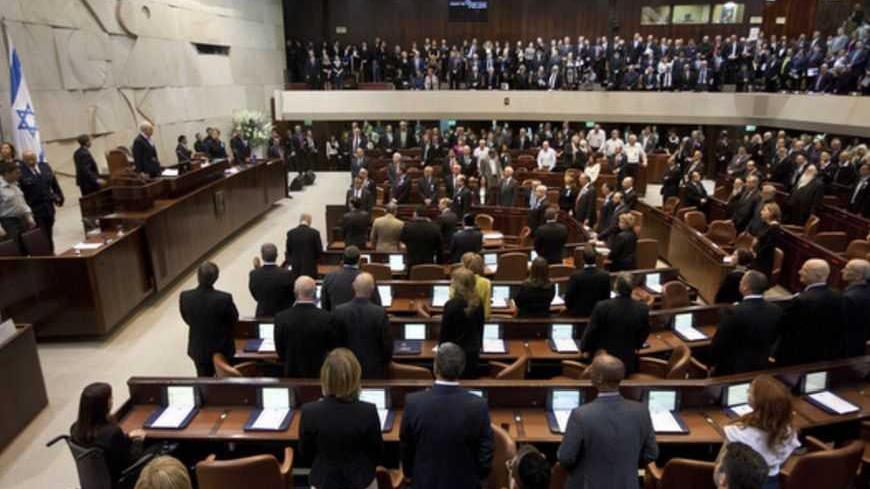 According to ultra-Orthodox party Yahadut HaTorah Knesset member Moshe Gafni, the two new stars on Israel’s political horizon — Yesh Atid Chairman Yair Lapid and HaBayit HaYehudi leader Naftali Bennett — are the worst thing that ever happened to the ultra-Orthodox public in Israel from time immemorial. Between the two of them, Gafni picks the kipa-wearing HaBayit HaYehudi leader as the worst of the two, and accuses him of “hypocrisy and treachery” toward ultra-Orthodox society.

The past years in the coalition were good years for the ultra-Orthodox community but Gafni, a Yahadut HaTorah member, knows that stormy skies await. In less than two weeks, he and his compatriots in the Knesset will lose their positions of influence in the government and in the Knesset’s more prestigious committees. Yes, very soon Gafni will be forced to part from his tenure as chairman of the Knesset’s finance committee, a role that represented the height of his parliamentary career.

Yet the opposition benches are not foreign to the ultra-Orthodox Knesset Member. During those years in the opposition, Gafni was viewed as a prominent and esteemed member of the opposition ranks. He was known for his sharp tongue, his wit and rich language that was even studded with secular slang, when the occasion called for it. Now Gafni, together with his six friends from the Yahadut HaTorah faction and 11 ultra-Orthodox Party Shas Knesset Members, are trying to re-invent themselves, to map their political enemies and shape an oppositional agenda.

Already, several things are clear: Yahadut HaTorah and Shas will coordinate their positions, chiefly with regard to the legislation of the new draft law. It is clear that they will also do their best to give Prime Minister Benjamin Netanyahu’s third government a very hard time, mainly regarding the cutbacks in the new budget, and will fight their new enemy – Naftali Bennett. Bennett was supposed to have been their brother before he turned into Lapid’s “lost brother.” Gafni is, meanwhile, watching his step around Netanyahu; like the Shas leadership, Gafni prefers to keep his door open, because “it’s not over until it’s over”.

In case Gafni and his cohorts are looking for encouraging signs for such a scenario, one such sign may be the news items in the media on Wednesday [March 6] regarding difficulties in the coalition negotiations with Lapid, who insists on the Foreign Ministry portfolio.

In an interview with Al-Monitor, Gafni adjusts to his new life, explains why Yair Lapid is much more dangerous than his deceased father Tommy Lapid who had headed a blatantly anti-ultra-Orthodox party (Shinui), and of course attacks Bennett.

On Lapid’s list are religious people like Rabbi Shai Piron, and he [Lapid] always speaks in praise of Judaism. Why don’t you believe him when he says that he wants to accomplish things via dialogue and rapprochement?

“Yair Lapid is a lot worse than his father. When someone tells you the truth to your face, it is easier for you [to get along] with him because you know where he stands. But when a fellow comes along and smiles, like Yair, and tells you, ‘You are my brother and I love you,’ then sticks a knife in your back — that is much worse. Yair Lapid never really tried to reach an agreement with us regarding the ultra-Orthodox draft, he never tried to create draft-guidelines with us. And besides, I know for a fact that his people told the prime minister’s people that they are not willing to sit in the coalition with the ultra-Orthodox.”

Gafni adds, “Yair Lapid’s father told everyone in their face that he wouldn’t sit with [Sephardi] Shas, that was bad enough. I told him then that this was racist because he was interested in sitting with the Ashkenazi ultra-Orthodox. Therefore we wouldn’t sit with him, and went to join the opposition.”

So now you’ll sit a bit in the opposition [again]. It’s not such a catastrophe.

“This will be a short-term government. Everything will fall apart because nothing really connects [the parties], it’s all artificial, only being against the ultra-Orthodox — that union won’t hold up for long. We are entering a difficult decision-making period in the economic and diplomatic spheres, President Obama is almost here and we can’t ignore what is happening around us. So I ask now: Who will be in the coalition? What will Yesh Atid Knesset Member Ofer Shelah say? What will HaTenua leader Tzipi Livni say? What will Habayit HaYehudi Knesset member Orit Struck do, and where is Naftali Bennett in this whole story? All this just doesn’t add up. There is no one direction, no goal that people aim for.”

Since when are you so much in favor of the diplomatic process?

“We already proved this in the past that we are in favor of diplomatic negotiations and with us, this [direction] can be advanced. We are against taking irresponsible steps but we are definitely in favor of a diplomatic process. On this issue, we are stable. Not radical. The ultra-Orthodox give Netanyahu stability.”

“He is headed to the unknown, with Bennett and Lapid. No one knows what their positions are on these issues. Bennett, after all, lives for the morning headlines. I am familiar with that, I know how he operates. So what will happen when they start to cut? What will Bennett do?”

Gafni asks, then immediately answers his own question. “He is not used to this. But there will be a situation here when painful decisions have to be made and the media will criticize him. As chairman of the Finance Committee I passed two biennial budgets even though I didn’t like doing it. But I managed to remove from the budgets those clauses that dramatically affected the benefit payments, and I am very concerned about what is going to happen. No one knows what will be here. I don’t know what Naftali Bennett wants.

And what is this alliance between Lapid and Bennett? Are they right or left economically? Are they on behalf of the middle class or against it? Are they for or against the tycoons?

Regarding the tycoons, Lapid and Bennett made statements that they will work together against … They are talking about the middle class and intend to work together to legislate the [economic] concentration law …

“That is what they say, both of them, but they do something else entirely. I’ll give you an example of Bennett. I met him once in the presence of HaBayit HaYehudi Knesset Member Uri Ariel. Bennett was very warm and friendly and told me that he is in favor of maintaining the world of Torah and bringing the national religious and ultra-Orthodox camps closer together, but a minute later he did exactly the opposite. This man will create a rift the likes of which we have never seen, between religious Zionism and the ultra-Orthodox public. What he did in a second, no one did here for years.

On this issue, I think that you can blame yourselves. You had the opportunity in the outgoing Knesset to legislate a draft law with your consent, but you pushed it off. You could be after all that, under much better conditions. Now, you won’t have control over anything from the opposition…

“That is true and I regret it. In the former coalition we could have arranged the law also with Yisrael Beiteinu leader Liberman, some mistakes were made – but that doesn’t’ matter anymore.”

Who will you fight against, from the ranks of the opposition?

“As far as we are concerned, being in the opposition is not a bad thing. We will fight Bennett and see how the representative of the settlers and the religious Zionists acts against the ultra-Orthodox community. We will watch them like hawks to see what they will do against the world of Torah and Torah education. We will close ranks with Shas and not sit by idly because we represent a certain public. We’ll see how much money it costs to maintain one isolated settlement, and at whose expense it is. I like the settlers, but if the person who represents them will cut the funding of yeshivas [Jewish educational institution], then we’ll put everything on the table: All the billions that go to the isolated settlements. Together with Shas and Labor Party leader Shelly Yachimovich, we’ll be an outstanding opposition. Citizens of the State of Israel, from all [socio-economic] levels and all sectors, will benefit from it greatly.”