What lies behind ultra-Orthodox embrace of Labor leader?

Shas Party Chairman Aryeh Deri’s announcement of support for Isaac Herzog in his run for prime minister may be just spin, but it does reflect the deep political shifts underway among the ultra-Orthodox. 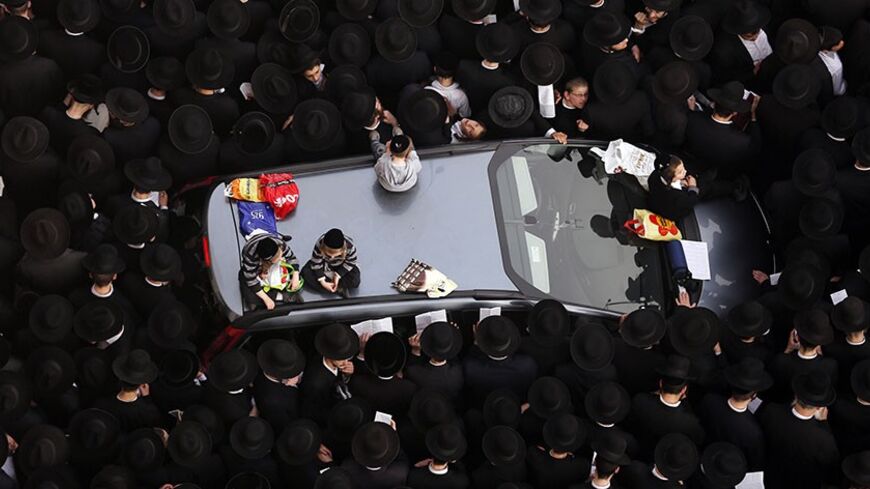 Ultra-Orthodox Jewish men in Jerusalem attend a mass prayer in protest of a bill that would cut their community's military exemptions, March 2, 2014. - REUTERS/Darren Whiteside

No matter where he went over the past few days, Knesset member Isaac “Buji” Herzog, chairman of the Labor Party, found himself surrounded by the heads of the ultra-Orthodox factions in the Knesset. They hailed him and they praised him, telling anyone who would only listen that he was their candidate for prime minister.

In the midst of the turbulent struggles between the coalition and the opposition in the Knesset, which is going on recess next week, attention focused March 11 on the warming relationship between Herzog and the ultra-Orthodox parties. The image presented to the media, largely by the ultra-Orthodox themselves, was that a new political alliance had been forged between the chairman of the Labor Party and the ultra-Orthodox, who turned their back on the right and on Prime Minister Benjamin Netanyahu. What really happened is much more complex.

While it is certainly in line with his character and temperament, Herzog was quick to bask in the compliments and respect heaped on him by his new supporters in the Knesset. For their part, the ultra-Orthodox went out of their way to show Netanyahu that they intend to wreak vengeance on him over the Sharing the Burden Law, which includes criminal sanctions for ultra-Orthodox men who refuse to serve in the Israel Defense Forces (IDF). But while the ultra-Orthodox may be moving closer to the Labor Party, calling it an alliance is premature.

Ever since Netanyahu left his ultra-Orthodox allies out of his government, and even more so after he threw his support behind the Sharing the Burden Law in the spirit of the Yesh Atid Party, ultra-Orthodox leaders have been looking for ways to settle accounts with him. At this stage, the decision to designate Herzog as their recommendation for prime minister, and to announce this decision in every possible forum, is nothing more than spin. Even when the chairman of the Shas Party, Knesset member Aryeh Deri, turns to Herzog and makes the pompous statement, “My blessing to you is that you ascend higher and higher,” and then expresses the hope, “If only we could coronate Herzog as prime minister,” there is no real reason to consider these statements a binding declaration.

First of all, the elections are a long way off, scheduled to take place in 2017. Secondly, Deri could very easily find himself a member of the Netanyahu government if the conditions are right. The ultra-Orthodox are still coping with the trauma of being forced to sit in the opposition. Therefore, at the moment of truth, they would prefer to attach themselves to whoever wins the next elections. That is also why they refused to state at any point that they would never join a Netanyahu government. Their aggressive embrace of the chairman of the Labor Party is, then, tactical. They are simply showing Netanyahu that they are not in his pocket.

Even if these expressions of support for Herzog should be considered specific and localized at this stage, there are certainly deep-rooted political shifts underway among the ultra-Orthodox, reflecting the deterioration of their two-decades-old alliance with the right. The phenomenon itself is worthy of investigation, since it does have the potential to bring about deep changes to the political map by shattering the traditional division of a left-wing bloc and a right-wing bloc aligned with the ultra-Orthodox. Movement between the blocs could have far-reaching implications, including on a possible diplomatic process with the Palestinians.

The rift began immediately after the last elections in January 2013. The ultra-Orthodox realized that they had been abandoned by Netanyahu, who succumbed to pressure by the chairman of Yesh Atid, Finance Minister Yair Lapid, to leave them in the opposition. They were left out and forced to watch Economy and Trade Minister Naftali Bennett lead HaBayit HaYehudi into the coalition as part of an alliance with their archenemy Lapid. At that stage, the bulk of their wrath was directed against Bennett. They regarded him as a traitor who preferred Lapid’s centrist party over his natural partners in the right-wing bloc. At the time, Netanyahu was perceived as having been forced to leave the ultra-Orthodox out of his government.

The ultra-Orthodox began speaking out against the settlements from that very moment. Suddenly, Shas and Yahadut HaTorah started singing a new tune, claiming that financial support for the settlements over the years came at the expense of the weaker sectors of the population. But the real escalation of tensions between the ultra-Orthodox and the right occurred over the last few weeks as a result of the Sharing the Burden Law. The ultra-Orthodox saw HaBayit HaYehudi as nothing less than traitors after they helped Lapid win approval for criminal sanctions against ultra-Orthodox men who do not serve in the IDF.

Last weekend, the gloves came off and the war went public. Yated Ne’eman, the mouthpiece of the ultra-Orthodox Degel HaTorah, launched an unprecedented campaign against the settlements, presenting them as an economic and security burden. The texts themselves could have been taken directly from the heart of the political left.

This is what it said in one such article, published March 7: “If the public only knew about the astronomical cost of protecting the isolated outposts, it would be ripping its hair out. If there is a burden on the Israeli economy, it is this: Money flows like water [to the settlements] through hidden channels, while clauses expertly hidden in the law are intended to make it easier to put up yet another caravan at some dangerous intersection, to pave a road directly to nowhere or to establish an empty neighborhood on an imaginary hill, and that is before the security burden, such as securing isolated outposts in dangerous places.”

Ultra-Orthodox Knesset member Moshe Gafni was reported as saying in the same article, “The reality in which a company of soldiers has to guard one and a half settlers at an inconceivable cost is par for the course.” Data from the Central Bureau of Statistics was also displayed prominently in Yated Ne’eman, showing that the settler population rose by just 5% in 2011, whereas expenditures on the settlements increased by 38%.

On March 11, a senior member of Shas told Al-Monitor that the former spiritual leader of the movement, the late Rabbi Ovadia Yosef, never considered the settlements sacred. The rabbi believed that the Torah of Israel precedes the land of Israel, and as such, any assault against the students of the Torah is unforgivable.

“It is true that most of our public is right-wing,” that same senior figure said, “but it can easily be made to change sides. After all, Shas has already supported the Oslo Accord. Besides, we have already been linked to the left in the past.”

The ultra-Orthodox now wander through the Knesset feeling that they owe the prime minister nothing. With their show of support for Herzog they are signaling that from now on no one can count them automatically in the right-wing bloc. This means that they are open to proposals, and that their alliance with Netanyahu and the Likud over the past few years no longer obligates them.

While ultra-Orthodox support for Herzog is, at this stage, little more than a curiosity — and just before the last elections, the ultra-Orthodox threatened Netanyahu that they would support former Labor chairwoman Knesset member Shelly Yachimovich — the deep-rooted political changes underway among the ultra-Orthodox could certainly lead to an earthquake in Israeli politics while the next elections approach. For the first time in the past two decades.