Israel’s ultra-Orthodox parties are forming their own distinct political bloc. 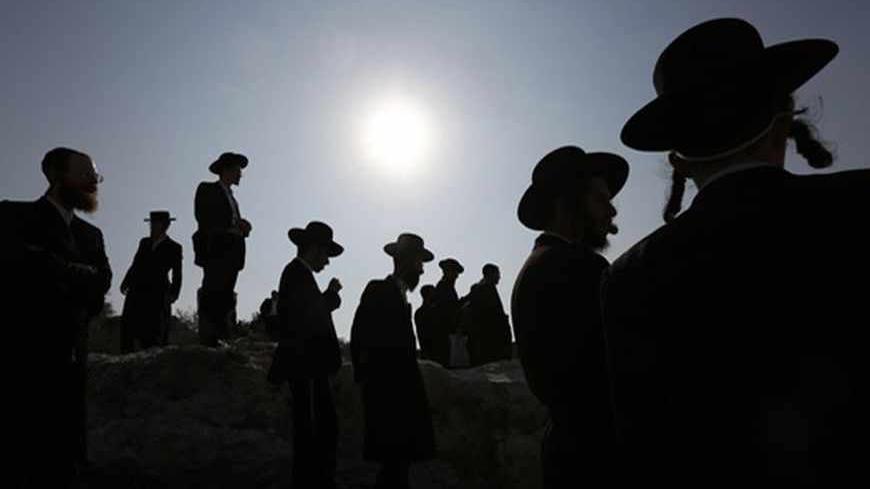 Ultra-Orthodox protesters pray during clashes in the town of Beit Shemesh, near Jerusalem, Aug. 14, 2013. Clashes with police and other security forces broke out as a group of ultra-Orthodox entered a construction site to prevent work from taking place at the site they believe contains ancient graves. - REUTERS/ Baz Ratner

Chairman of the ultra-Orthodox Yahadut HaTorah faction, Knesset member Eliezer Moses, aroused a storm on Aug. 7 in the ultra-Orthodox media when he went on the offensive against the settlers in an interview with the Kikar HaShabbat news website. "The Hebron Yeshiva is as or more important to us than the city of Hebron," Moses was quoted as saying in the interview headline. In the interview, Moses said that as the diplomatic process advances, the chances increase that ultra-Orthodox parties Shas and Yahadut HaTorah will join the government instead of the right-wing parties.

The interview with Moses left almost no mark outside the ultra-Orthodox media, even though it contains the seeds of a real political drama. True, Moses said what he did at a time that ultra-Orthodox communities were removed from the national priority map, and while several settlements were added to the list. But it would be a mistake to attribute his words only to this when — in fact — they reflect a deep conceptual change affecting the ultra-Orthodox leadership ever since the last elections.

The ultra-Orthodox repudiation of settler ideology can also have far-reaching ramifications on the size of the right-wing bloc, to the extent of affecting who will be the next prime minister. Moreover, the sharp turn to the left of the ultra-Orthodox parties is likely to give a significant boost to negotiations between Israel and the Palestinians.

In the months that elapsed since the elections on Jan. 22, the ultra-Orthodox parties have undergone an accelerated process of disillusionment that began immediately after their banishment to the ranks of the opposition by their former ally, Prime Minister Benjamin Netanyahu. The Likud chairman established his government with Yesh Atid leader Yair Lapid and HaBayit HaYehudi Chairman Naftali Bennett, and the consequences for the ultra-Orthodox were disastrous: The rabbinical colleges' budgets were almost immediately slashed and a law was legislated requiring them to serve in the army. Thus, the removal of the ultra-Orthodox localities from the national priority map was only the last in a series of decrees that prompted ultra-Orthodox society to undergo painful soul-searching and reach a clear conclusion: The ultra-Orthodox are no longer beholden to right-wing interests and the settlements. That era is over.

We are not talking about a caprice or a brief, post-election day political temper tantrum. That was, perhaps, the assessment on March 5, when former Finance Committee Chairman Knesset member Moshe Gafni threatened to reveal the systematic, scandalous budgetary transfers to the settlements over the years. But later on, it became clear that the change is deep and substantive. In an interview with Israeli daily Maariv on March 9, Gafni presented a rational, reasoned position. "I never said that the right-wing position is our ideology. We always went with the right only because of the Jewish issue, not because of diplomatic outlooks. On the contrary. Regarding diplomatic issues, ultra-Orthodox Judaism has always been moderate."

In recent weeks, the ultra-Orthodox parties have fought shoulder to shoulder with Knesset members from the Labor and Meretz parties against Lapid and Netanyahu's budget of cutbacks. It turns out that the sides have more in common than we thought. The ultra-Orthodox have recalled that they hold moderate stances in the diplomatic realm and have never sanctified the Land of Israel, only the Torah world. Thus, when the apple of their eye comes under attack, they no longer feel beholden to religious Zionism.

In this atmosphere, we should not be surprised at the letter sent by Knesset member Yitzhak Cohen (Shas) to Netanyahu in May, in which he called on the premier to adopt the Arab League initiative, "from the perspective that we live in a space that is almost entirely Muslim." On July 17, Cohen — former deputy finance minister in Netanyahu's government — even signed Knesset member Hilik Bar's bill (Labor) that would require the government to make any decisions regarding the future of the territories in Judea and Samaria only according to the principle of "two states for two nations." Cohen also threatened to call for an ultra-Orthodox boycott on settlement products, in a speech on March 3, in which he said that the settlers "create most of Israel's security burden."

Cohen's expressions and actions could not have taken place in Netanyahu's previous government, when the alliance between Shas under former party Chair Eli Yishai and Netanyahu was viewed as ironclad. Now, under Knesset member Aryeh Deri's leadership, Shas presents more moderate diplomatic positions. Cohen would not have sent that letter without obtaining Deri's blessing — considering that Deri himself at the very beginning of his political life had been viewed as a close associate of former Prime Minister and Labor Chairman late Yitzhak Rabin. Yishai treated the alliance between Shas and the right as a strategic alliance, while Deri seems to view it as a tactical one — if that.

Sudri claims, "The right-wing political leadership does not properly gauge the anger and feelings of betrayal on the part of the ultra-Orthodox. Therefore, they [the settlers] think that under the right constellation, the ultra-Orthodox will get together with them again, and that is a mistake. The rupture is deep. It is a breach of consciousness, way beyond revenge." He says, "I recall that Yossi Sarid [former Meretz chairman] once said that for the sake of peace, he is ready to wear a streimel [Hasidic hat for males]. Today, the ultra-Orthodox are willing to wear Yossi Sarid to save the Torah world."

Bloom recalls that era of five years ago when Yahadut HaTorah was in the opposition, in the waning days of Ehud Olmert's government. According to Bloom, Ravitz spoke longingly and nostalgically for the days of [ultra-Orthodox Ashkenazi spiritual leader] Rabbi Shach, who avoided all connection with the settlers. When Betar Illit was founded in the 1980s, Rabbi Shach asked that no advertisements for selling apartments should appear. "He repeated and said that it is forbidden to live in the territories, that it is a provocation to the nations of the world," Ravitz said then, and added that Shach "was smarter than all of us." Ravitz's conclusion, writes Bloom, is that "the settlers turned the ultra-Orthodox buyers of apartments in Betar Illit into settlers against their will. To cannon fodder. At that time, I had a hard time understanding him. But today I see how he understood more than us all."

Another example of this trend in ultra-Orthodox society are the anti-settler statements made by the admor [Hasidic grand rabbi] of Sanz-Klausenburg in a Torah lecture to thousands of adherents on Aug 11. The admor said that the settlers, "in their corrupt opinion,'' have no interest in upholding the Torah, and have become full partners to the uprooting of the religion.

Where does all this lead? In Sudri's opinion, this crisis may well have far-reaching ramifications on the political structure. If until today there were two large blocs — left and right — and the ultra-Orthodox were automatically counted with the right, we now witness the emergence of three blocs: the right bloc, the left bloc and the ultra-Orthodox bloc. "If an alternative leader emerges from the left," he summarizes, "the ultra-Orthodox will become the force that tilts the scales."