The ultra-Orthodox hope that joining the government will restore the funding stripped from the budget and annul military reforms introduced by former Finance Minister Yair Lapid. 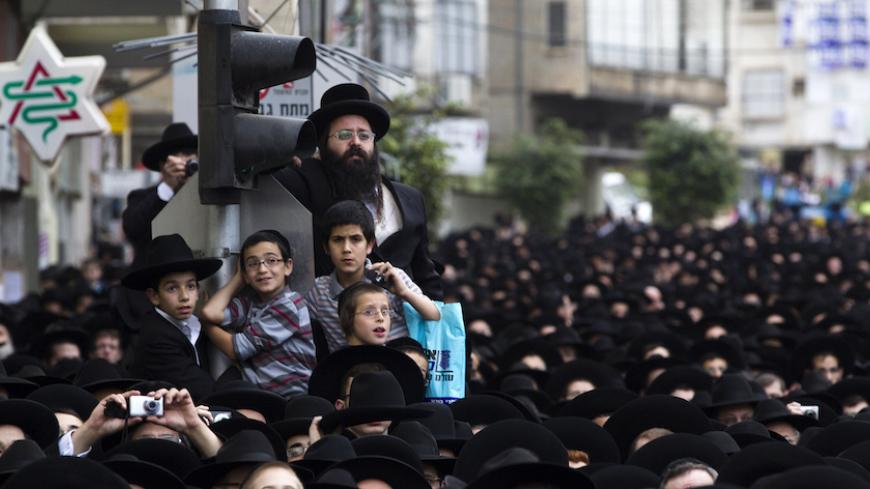 Moshe Gafni’s cynicism is probably the less hurtful part for Lapid. Rather, Gafni’s party joining the emerging coalition augurs the dismantling, one by one, of all of Lapid’s achievements in the outgoing government, beginning with the conversion to Judaism reforms over which he labored, through the cuts he made in the yeshiva budgets and to the historic reform in military recruitment of the ultra-Orthodox, which he led, legislating mandatory military service for yeshiva (rabbinical college) students. This is why April 29 was a festive day for the ultra-Orthodox. Even now, almost a week later, the sense in the community, as expressed in synagogues and conversations in hallway, is one of tremendous victory. For the first time, there is a feeling on the ultra-Orthodox street that its lost honor (and funding) has been restored.

“We can finally raise our heads,” said Shlomo Zalman Eisenbach of the ultra-Orthodox settlement town of Beitar Ilit. “In recent years, we were humiliated, persecuted to an unprecedented extent, and now we are in government, and Lapid is out. I personally would have preferred joining a left-wing government or a unity government, then we would not have been attacked as much. Under the [Benjamin] Netanyahu government, as the weak link [in the coalition chain], we will be attacked incessantly, but it’s preferable to being hung out to dry in the opposition.”

Concern about Israeli media reaction did not stop the ultra-Orthodox media from celebrating victory over the weekend. The weekly Mishpaha (Family) ran the sensationalist banner headline: “The hunger days are over.” In other words, with hunger behind us, fullness is ahead.

“We played the political game to perfection. We brought down the government by undermining the zero sales tax law [on homes for first-time buyers]. We sent Yair Lapid to the opposition with half the number of Knesset seats he had in the past, and we joined the government in his place,” said Rabbi Haim Weissfish, head of a Jerusalem religious seminary. “There has never been a politician in Israeli history who caused more extensive damage to the world of the yeshivas and seminaries than Yair Lapid, and for the ultra-Orthodox this development is nothing short of dramatic.”

The two central issues that affect virtually every ultra-Orthodox person are funding of the yeshivas and restoration of the income subsidy annulled by the Supreme Court. Revival of income support will provide 1,000 Israeli shekels ($250) to every ultra-Orthodox family with at least three children, and the monthly governmental stipend for every yeshiva student will double to 850 shekels ($210). In addition, the government will no longer enforce the provision that cuts more than two-thirds off the budget from ultra-Orthodox schools that do not teach a minimum of “secular” subjects, like English and math.

The discourse in the Israeli media to the effect that the ultra-Orthodox are squeezing the state for funding is generating rage among many in the community. Rabbi Shlomo Brillant, director general of the organization of yeshiva principals, claims that the ultra-Orthodox have simply restored things to the way they were in 2012, nothing more, and that accusations of raiding the state's coffers are a blatant lie. “In the Israeli media, the ultra-Orthodox are accused of blackmail, whereas, in fact, they are the object of serious blackmail that no one talks about,” Brillant charged in a conversation with Al-Monitor.

He added, “There is a despicable custom in Israel of designating the budgets for the ultra-Orthodox as ‘special support funds’ rather than including them as regular budget line items, and this enables blackmailing the ultra-Orthodox parties each time in order to buy their political support anew. This time we also asked that the funds be included in the state budget, but the Likud Party refused. The old game is convenient for them. The ultra-Orthodox get a lot less than institutions of higher learning or regular high schools, and even the little they get is only in return for political support,” Brillant said.

The ultra-Orthodox are aware that by joining the government, they are building support for Lapid in the next election. “What choice do we have?” Brillant asked. “To go hungry? In the past two years, there was no food in the yeshivas. We were on the verge of collapse.”

It appears that the desire to exact revenge on Lapid and to restore to the ultra-Orthodox what was taken from them in the past two years has overcome their long-term interest in seeking revenge against Netanyahu for his betrayal, which was not the first time. In 2003, Netanyahu had also turned on the ultra-Orthodox when he slashed child support payments, and in the outgoing government he supported Lapid’s legislation. His dubious reputation as an easily pressured politician willing to pay dearly for stable governance makes him a convenient partner for the ultra-Orthodox, who know how to effectively leverage their meager political power.