The odd-couple collaboration between the opposition ultra-Orthodox Yahadut HaTorah and left-wing Meretz might someday expand from their social justice struggle to diplomatic issues as well. 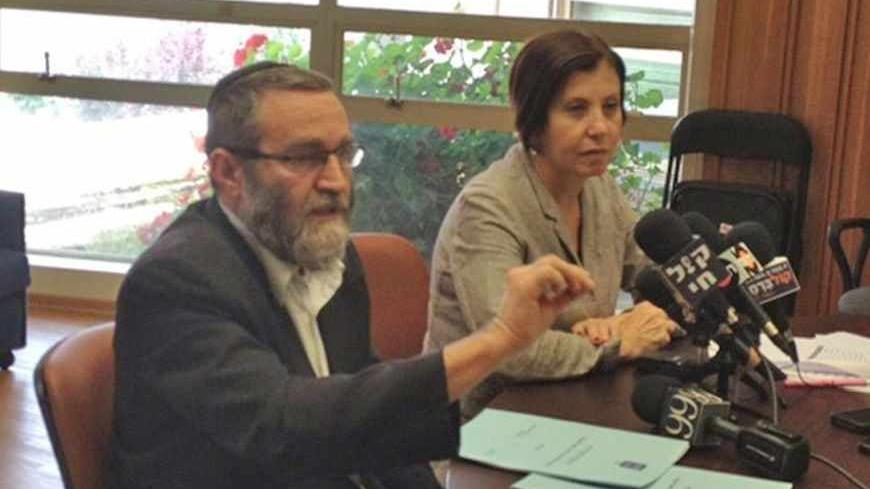 Knesset members Moshe Gafni, chairman of the ultra-Orthodox Yahadut HaTorah Party, and Zahava Gal-On, leader of the leftist Meretz party, present their joint alternative budget proposal during a press conference in the Knesset in Jerusalem, May 29, 2013. - Meretz spokeswoman, Hamutal Cohen

The event that took place in the halls of the Zionist Organization of America House in Tel Aviv about a month ago, on July 21, may have looked strange to an onlooker. The place was packed with dozens of [leftist] Meretz party members, while on the stage in front of them sat Knesset member Moshe Gafni, chairman of the ultra-Orthodox Yahadut HaTorah party, laying out his socioeconomic worldview. With giant signs sporting Meretz’s green logo behind him, Gafni, a prominent representative of Ashkenazi ultra-Orthodox politics, felt at home.

The occasional applause signaled that he was, indeed, a welcomed and esteemed guest in these quarters. The sympathy of the audience was based on two things the ultra-Orthodox politician and the members of the left-wing party have in common: a socioeconomic worldview and abhorrence of Finance Minister Yair Lapid, Prime Minister Benjamin Netanyahu and Economy and Trade Minister Naftali Bennett.

It was the chairwoman of Meretz, Knesset Member Zahava Gal-On, who organized this gathering. Gal-On is Gafni’s new political partner in opposition to the Netanyahu-Lapid government. Their acquaintance of many years has a history of joint struggles on the finance committee, which Gafni headed until the elections. Today the flourishing alliance between the two is accepted as natural in Gafni’s party and is the subject of favorable coverage in the ultra-Orthodox press.

The last election no doubt created some odd alliances. The connection in the coalition between Lapid and Bennett is still difficult for most of those involved in Israeli politics to absorb. On the other hand, in the opposition the collaborations between the ultra-Orthodox and the left-wing and Arab parties are flourishing around socioeconomic fights, which reached their apex in the debate over the state budget. Thus sprouted the interesting cooperation between Gal-On and Gafni, as well.

The alliance between the chairs of Meretz and Yahadut HaTorah is a direct result of the prime minister’s turning his back on the ultra-Orthodox and their banishment to the opposition. Thus it all started. Later, their common economic worldview, their personal chemistry, and their second common enemy, Lapid, brought about a strengthening of ties and parliamentary and public relations collaborations. One of these collaborations, which got broad coverage, was the socioeconomic plan that they jointly presented at the end of May as an alternative to the government’s state budget proposal.

With the help of their advisers, Gafni and Gal-On formulated a proposal to challenge Lapid's budget. They claimed that it is possible to reduce the deficit by means other than the new taxes Lapid and Netanyahu planned to drop on the middle class. In a press conference they held at the time, Lapid featured as the focus of their attacks. Gafni and Gal-On, who never miss an opportunity to take a hit at the finance minister, did so again as they presented themselves as the defenders of the weaker strata of society and the Israeli middle class.

The latest interesting development in their relationship is Gafni’s warming, at least in his declarations, toward the left-wing diplomatic worldview Meretz represents. Gafni said explicitly that he would not have a problem sitting in a left-wing government — if it allows him to serve the ultra-Orthodox public. Indeed, in the ultra-Orthodox press, some interpret the alliance with the left as a political exercise, as another way for Gafni, the “political fox,” to pressure the prime minister. One way or another, however, it seems that the two sides are enjoying their cooperation, even as they face their constituencies.

Is this colorful covenant effective beyond its media value? “A million percent,” Gafni answered when I posed the question to him. “Many things have changed following the joint struggle on the budget. The initial plan was much more draconian. Yair Lapid, after all, reads what the press says and acts accordingly. I was worried for the middle class when Lapid was just a radio announcer.” Gal-On’s answer is also positive: “As a result of our joint struggle we succeeded in removing some troublesome elements from the budget.”

As in any successful political partnership, personal chemistry plays a central role. “I’ve known Gafni for many years,” said Gal-On, “I have great esteem for him. The beauty of this is that we formulated our alternative economic plan on the basis of points of agreement. We did not linger on disagreements. Gafni knows that I support the separation of religion and state, pluralism, and a core curriculum — on all these issues we have deep divisions, and we didn’t touch them. We went only with the social issues, and presented a model for an alternative budget.”

According to Gal-On, “In politics one must know how to build coalitions and widen circles in order to have influence, without conceding on points of disagreement. We wished to advance social solidarity.”

You don’t have a problem with issues such as drafting the ultra-Orthodox or his opposition to a core curriculum? I pressed her. “No,” she answered promptly. “I never get into this. Gafni is a brilliant person, a skilled and experienced politician, with a sense of humor, who knows how to put on a show and knows the rules of the game.”

When Gafni was asked about the surprising alliance, he replied, “In contrast to our image, we [the ultra-Orthodox] are human beings. Although there are those who think we are frogs. It’s true that we have disagreements on the topic of religion and state, but besides that there is hardly anything. It could be that in Meretz they are extreme about the diplomatic process, and I am less so. But I am not the Likud Party.”

In Gafni's words, “We see eye to eye on economic issues. Both of us have served many years in the Knesset. Now in the struggle for the budget we coordinated a fight, because we have a finance minister who knows nothing. We have other collaborations in the opposition, but with Zahava there is more of a connection.”

What does this cooperation augur for the future? Will it continue also on diplomatic issues? Gafni does not exclude the possibility: “I support a diplomatic process. We are not the right. But more than anything I want this government to become a thing of the past. In a political system you work for your goals, and according to your goals you determine your partners.”

From Gafni's answers, one can see that uppermost in his mind are the budgets for the ultra-Orthodox that the current government cut and that he wants to restore, but one cannot deny the possibility that we will soon see the two of them jointly pressuring the government on the issue of negotiations with the Palestinians.