Prime Minister Benjamin Netanyahu’s decision to suspend the plan for a Western Wall pluralistic prayer space must be condemned, but harnessing the ultra-Orthodox into efforts to topple Netanyahu is more important. 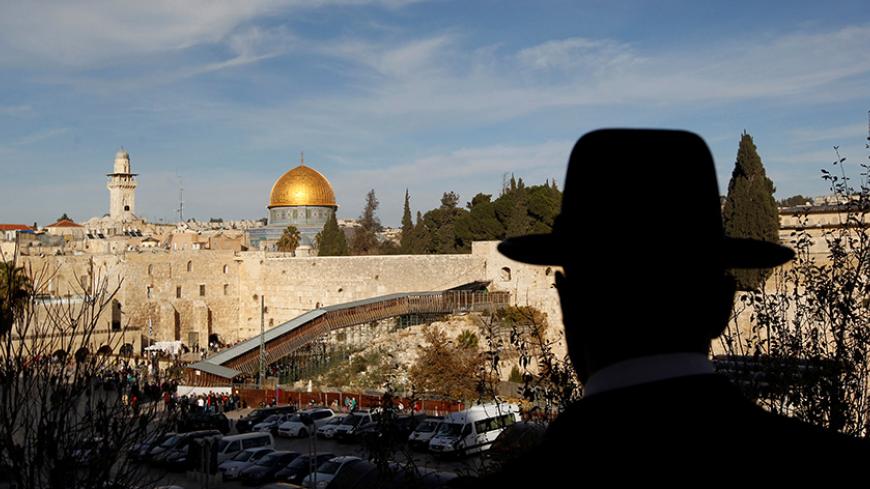 An ultra-Orthodox Jewish man stands at a viewpoint overlooking a wooden ramp (C) leading up from Judaism's Western Wall to the sacred compound known to Muslims as the Noble Sanctuary and to Jews as the Temple Mount, Jerusalem's Old City, Dec. 12, 2011. - REUTERS/Ronen Zvulun

Normally, I would have taken this opportunity to express rare agreement with Yisrael Beitenu chair Defense Minister Avigdor Liberman, who said the decision to freeze a plan to establish a pluralistic prayer space at the Western Wall “constitutes a serious blow to the unity of the Jewish people, to Jewish communities and to the fabric of the relationship between Israel and diaspora Jewry.”

Normally I would have described the freezing of the prayer plan as additional proof that Prime Minister Benjamin Netanyahu’s adherence to power easily trumps his adherence to principles, values and commitments. I would have cited his pledge to participants of the November 2015 Jewish Federations of North America assembly to invest in strengthening Reform and Conservative communities within Israel. And with that his hope that “We will soon conclude a long overdue understanding that will ensure that the Kotel (Western Wall) is a source of unity for our people, not a point of division.”

Normally, I would have underscored the following warning issued in the 2016 report of the Jewish People Policy Institute: “The more liberal, Reform, Reconstructionist, Conservative, and secular parts of the American Jewish community may become more distant as Israel demographically becomes more Orthodox and nationalistic.”

But these times are far from normal, about as far as Netanyahu is from being willing/able to unshackle Israel from its 50-year occupation of Palestinian territories that is turning it into a pariah apartheid state.

These days, a government that suppresses freedom of expression and criticism, nurtures religious fundamentalism and encourages ignorance holds the reins of power in Israel. With all due respect for progressive Judaism, and I hold those groups in high esteem, Israeli society is currently facing far greater challenges than the issue of prayer at Judaism’s holiest site. The foremost challenge of any democracy-loving Jew should be replacing the current Israeli government with one that will restore democracy, end the occupation and advance the two-state solution for Israelis and Palestinians.

The chasm between President Donald Trump’s desire to take credit for a regional peace agreement ending the Israeli-Palestinian conflict and the desire of HaBayit HaYehudi party Chairman Naftali Bennett to take credit for more and more homes for settlers in Palestinian territories holds a degree of promise. This divide conceivably could result in the calling of early Knesset elections within the coming year.

The Reform stream of Judaism, for which pluralism and the Western Wall plan are paramount, includes a majority of the Jewish community in the United States, but is a negligible minority among Israeli voters. The struggle against the ultra-Orthodox religious monopoly in Israel is just and important. But it pushes away the Israeli political parties that could replace the current government and then promote pluralism and equality from a position of power, while at the same time reaching an agreement with the Palestinians.

If they are serious about replacing Netanyahu, the centrist Yesh Atid and the center-left Zionist Camp (headed by whomever is chosen at the Labor Party primaries on July 4) will have to swallow two bitter pills in the next elections — the leftist Meretz Party and the Arab Joint List party, on the one hand, and the ultra-Orthodox parties, on the other. Only by joining forces with these parties will they have the needed majority to oust Netanyahu and his rightist allies.

At the annual Herzliya Conference June 20-22, the head of the Zionist Camp, Isaac Herzog, called for cooperation among the centrist parties. Meretz Chair Zehava Gal-On, who was the next speaker, reminded Herzog that the center cannot put together a ruling coalition without the left — without her party. Knesset member Erel Margalit, one of the contenders for the Labor Party (major partner within the Zionist Camp) leadership, went even further. He told i24news television presenter Ami Kaufman that if elected prime minister, he would invite the Joint List to join his government.

Zionist parties and the Arab Knesset members are hardly likely to find sufficient common ground to form a government. At best, the Arab Joint List would use the votes it garners to prevent the president from tasking the leader of the right wing with forming Israel’s next government. The Joint List could tell the president that it will support from outside the coalition a center-left government, thus guaranteeing the government a Knesset majority of at least 61. At this stage, a cease-fire declaration in the war over the rights of Reform Jews would open the door to the ultra-Orthodox parties to join the center and center-left in forming a new government.

As mentioned in Al-Monitor by Danny Zaken, Knesset member Moshe Gafni, the chair of the ultra-Orthodox Yahadut HaTorah party, said in a panel conversation with Haaretz editor-in-chief Aluf Benn at the paper’s June 12 peace conference that the left is more intelligent than the right. He added that he doesn’t like the government’s legislation on right-wing issues and would vote against it if he could. “But I don’t have an ally. There’s no one on the left who will tell me, ‘Whatever you hold dearest, we’ll go along with it all the way.’” Gafni’s dearest wish is preventing Reform Judaism from acquiring any official status in Israel.

Rabbi Gilad Kariv, the head of the Reform movement in Israel, expressed regret at Gafni’s hatred for Reform Jews, but added that for the sake of advancing a two-state solution, “I assume there will be one or two Reform Jews who will agree to freeze the Western Wall plan.” One can expect that liberal American Jews, too, will put the Jewish state’s existential interest ahead of their values, important and just as they are.

Senior secular politicians, such as Israel’s sixth president, Haim Herzog, and the former head of the defunct Kadima Party, Knesset member Tzipi Livni, are on record as saying that for the sake of peace, they would don ultra-Orthodox garb. They meant to express willingness for a deal in which they would cooperate with the ultra-Orthodox in order to obtain their support for making peace with the Arabs. The anti-clerical head of Yesh Atid, Knesset member Yair Lapid, has already posed at the Western Wall wrapped in a traditional prayer shawl, and his wife (it was published) conducts religious ceremonies. The Labor Party and even Meretz were partners in a government coalition with the ultra-Orthodox parties in the past. A senior Meretz figure told Al-Monitor this week that she does not rule out a coalition partnership with the ultra-Orthodox Yahadut HaTorah and Shas parties. She knows that changing the status quo in relations with the Palestinians will require compromises far more painful than maintaining the status quo at the Western Wall.

Normally, one could wage battles against many worthy issues. But these are not normal times. These days we have to choose our battles, focus on the central one and not ease up.