One of the first actions of new Labor Knesset member Rabbi Gilad Kari was sneaking a Torah scroll into the Western Wall plaza for women activists to pray from. 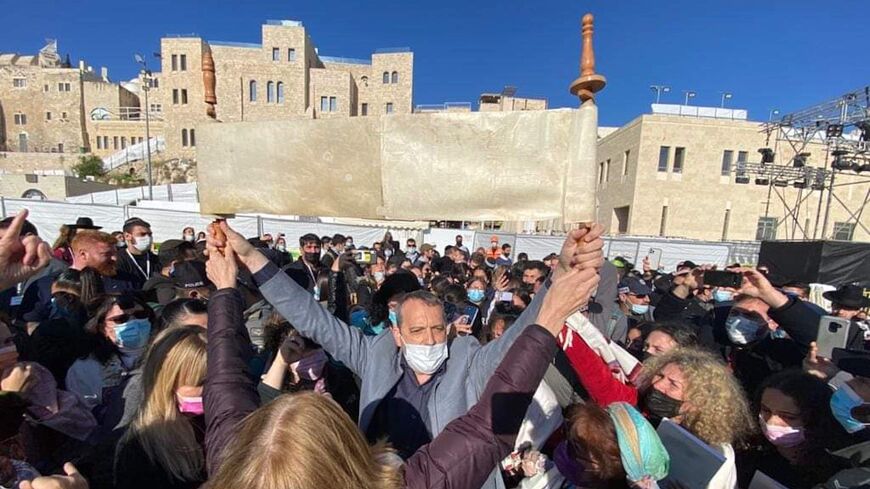 Knesset member Rabbi Gilad Kariv, a new Labor lawmaker, arrived at the Western Wall in Jerusalem on the morning of April 13 with a group of activists calling themselves “Women of the Wall.” Standing in front of Judaism’s holiest site, Kariv pulled a Torah scroll out of his bag and the women held their customary prayer service marking the first day of the Hebrew month of Iyar.

For years, this women’s group has been fighting for the right to wear prayer shawls, pray and read from the Torah at the site, incurring the wrath of the dominant Orthodox stream of Judaism that bans women from engaging in such rituals or mixing with male worshipers.

According to regulations, worshippers are banned from bringing in Torah scrolls and allowed to use only those that are kept there. Kariv took advantage of his immunity as a Knesset member that prevented security guards from searching his bag.

The group’s arrival set off a storm. Orthodox worshipers tried to interrupt what for them was sacrilege. Within minutes, Knesset members from Israel’s ultra-Orthodox parties were apprised of the development and issued harsh condemnations of Kariv.

“Shameful behavior,” said Knesset member Yaakov Tessler of United Torah Judaism (UTJ), adding, “Every Jew should condemn him and his actions, and it is my fervent hope that such a man will not be a member of any government coalition that is formed.”

Newly elected radical Knesset member Itamar Ben-Gvir of the Religious Zionism Party accused Kariv of criminal behavior. “Taking advantage of Knesset immunity to commit a crime and hurt the feelings of the people of Israel at the start of the new month is inappropriate and despicable,” he said. Ben-Gvir added that he intends to complain to the Knesset speaker and demand that Kariv be warned against “violating the laws that prohibit incitement and agitation that are not covered by his immunity.”

The chair of the UTJ, Knesset member Moshe Gafni, has already sent a letter to Knesset Speaker Yariv Levin demanding that Kariv be punished. He claimed Kariv abused his immunity to bring a Torah scroll to the holy site “in order to provoke and hurt the feelings of all Jewish people around the world.”

Kariv obviously expected his actions to be provocative. Videos and photos showing him surrounded by women reading the Torah are a victory in the prolonged struggle for recognition of the Reform movement in Israel, now represented in the Knesset for the first time.

“Reading the Torah at the [Western Wall] on the eve of Israel’s 73rd Independence Day is a victory for tolerance and sanity over radicalism, incitement and exclusion — a victory for the entire Jewish nation,” said Yochi Rappaport, director of the Women of the Wall organization. “We will continue coming to the Wall every month to fight for the rights of every Jewish man and woman to pray.”

Kariv, too, trumpeted the historic achievement, posting photos and tweeting, “I am proud to use my immunity in order to bear the Torah scroll of the Women of the Wall, and I’m ashamed that the authorities are so busy attempting to confiscate Torah books and prevent women from praying and reading the Torah as is their custom. This morning, too, it is important to remember that one side agreed to the historic [Western Wall] compromise proposal while the other side thwarted it aggressively. Guess who is on which side?”

Kariv was referring to a historic compromise achieved in 2016, with the blessing of the government, allowing women and men to pray together at a section set apart for gender-mixed prayer. Kariv himself was instrumental in that achievement, which was hailed by American Jews, the majority of whom are progressive. However, under heavy pressure from the ultra-Orthodox parties, the government went back on the deal, setting off a renewed campaign by Women of the Wall. Their impressive political and public victory this week is resonating with the American Reform movement, whose ties with the Israeli government have deteriorated since it reneged on the compromise.

Kariv has pledged to continue fighting for the rights of all streams of Judaism and Jewish communities to pray at the Western Wall. Judging by the heated exchanges between Kariv and the ultra-Orthodox and other Knesset members, these tensions and skirmishes will feature prominently on the agenda of the newly elected 24th Knesset.

Kariv, 47, is a veteran social justice campaigner and has been leading the struggle for Reform rights for years. As a lawyer, he represented the Women of the Wall in negotiations that led to the 2016 compromise, enduring threats and displays of violence at the Wall. Following the March 23 elections, new avenues have opened up for Kariv and his activism, enabling him as a parliamentarian to advance the Reform cause in plenary speeches, Knesset committees and legislation.

Representatives of the ultra-Orthodox UTJ and Shas parties and those of the Religious Zionism party have made it clear they will not back off. The issue of the Western Wall is not simply ideological rivalry with a representative of the progressive political left, but a struggle of more fundamental importance. They view Kariv as representing a warped version of Judaism that undermines its basic religious principles, with disastrous repercussions for the next generations.

That concern is why they refuse to cooperate with him and Labor. “There are all sorts of clownish religions from abroad that Labor has now decided to bring to Israel. We will not cooperate with people of this type who destroy the traditional Jewish roots,” declared Shas Knesset member Moshe Abutboul after Kariv was elected.

The clash has clear significance for Israel’s polarized politics and ongoing government crisis. The ultra-Orthodox are signaling that as long as Kariv represents Labor, they will not cooperate with the party. The boycott would torpedo the hopes entertained by some in recent weeks of the ultra-Orthodox joining a coalition of parties dedicated to unseating Prime Minister Benjamin Netanyahu. Kariv’s victory has had the opposite effect of bolstering and justifying their longstanding alliance with Netanyahu.