The wall that separates Israeli, US Jews

While Israeli Prime Minister Benjamin Netanyahu drags his feet in ensuring that all Jews can worship at the Western Wall in the way they wish, some members of his party have proposed a law that would imprison women for doing just that. 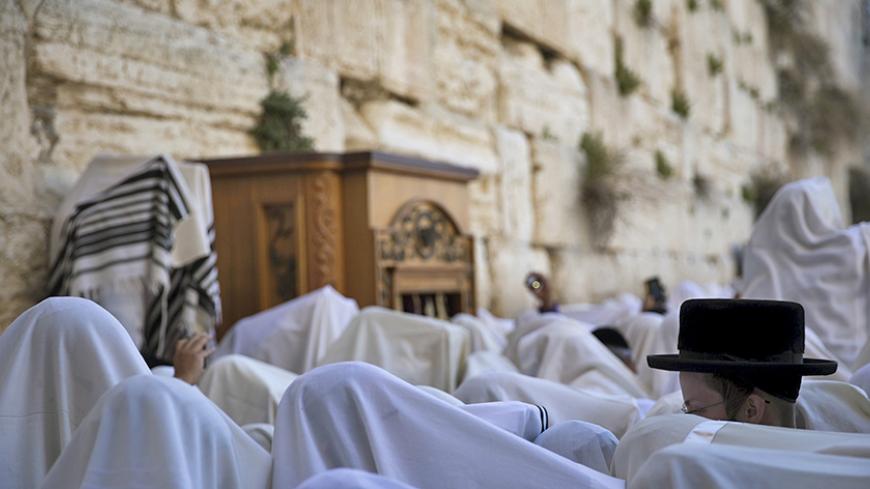 While paying a condolence call in the West Bank settlement of Ofra following a terror attack in 2001, Benjamin Netanyahu bragged about his intimate knowledge of the ins and outs of US politics. “I know what America is,” he told the bereaved family. “America is something you can easily move. Move in the right direction,” Netanyahu added, unaware of the open Channel 10 television mike. “Let’s say they say something, so what. … I wasn’t afraid to clash with [President Bill] Clinton. … In any case I’m paying the price, so I prefer at least to get something out of it. Bang for the buck.” Netanyahu learned the hard way, however, that it is not so easy to move America.

Despite the goodwill of Netanyahu's Republican friends in Congress and the fortune of his good friend and casino owner Sheldon Adelson, US President Barack Obama was not budged from his position on the Iran nuclear issue. Obama hasn't even handed the baton to Donald Trump, but Netanyahu has already announced that at his first meeting with the new president, he will present him with a variety of options for revoking the nuclear deal with Iran. That, the prime minister may find easier than he thought.

Trump promised more than once that if he made it to the Oval Office, he would rip the agreement to shreds. In addition, Israel now has its own Queen Esther — the biblical bride of a powerful Persian king who saved the Jewish people from an evil adviser — among the presidential family in the person of Ivanka Trump-Kushner, a Jewish convert — and she's no lightweight convert of the Conservative or Reform variety, either. Ivanka’s Orthodox Jewish conversion, the only type accepted by Israel’s chief rabbinate, was even authorized by none other than Israel’s chief rabbi.

When Netanyahu says that he knows “how to move America in the right direction,” however, he is mostly referring to Congress. This is how it works: First he gets major Jewish political contributors and community leaders moving so that they, in turn, can light a fire under the pro-Israel lobby of the American Israel Public Affairs Committee and send it to storm Capitol Hill to mobilize lawmakers for Israel’s mission of the day. The catch is that unlike in Israel’s mostly Orthodox synagogues, in the progressive Reform and Conservative synagogues attended by most American Jews, there is no separation between men and women, and women are allowed to don a prayer shawl and read from the Torah. According to a comprehensive 2013 Pew Research Center survey, 35% of American Jews are affiliated with the Reform community, 18% with the Conservative movement and only 1 in 10 worships in a synagogue of the Orthodox stream.

Trying to win the hearts and minds of big Jewish American donors usually includes inviting them on a pampered visit to Israel that invariably includes a stop at the Western Wall in Jerusalem. There, the guests are in for an unpleasant surprise: The ushers of the Western Wall rabbinate move women aside, to an area designated for them by Israel’s ruling rabbinate, and prayer shawls are reserved for men. That's only the beginning.

The next time they visit the wall, women who bring a prayer shawl from home could risk ending up in police custody. According to proposed legislation tabled in the Knesset by four of the ruling coalition parties — the ultra-Orthodox Shas and Yahadut HaTorah, the nationalist-Orthodox HaBayit HaYehudi and Netanyahu’s Likud — a woman who wraps herself in a prayer shawl, reads from the Torah or wears a phylactery at the Western Wall plaza could be subjected to six months in jail or a fine of 10,000 Israeli shekels ($2,630). Of note, none of these practices are forbidden by Jewish Orthodox rules, or Halacha. Mixed praying by men and women would also be considered a violation of the penal code.

The proposed bill is designed to circumvent a government decision made in January to set aside part of the prayer area at the Western Wall for Reform and Conservative Jews and for Women of the Wall, who want equal prayer rights at Judaism’s holiest site. Netanyahu himself promised a delegation of liberal American rabbis in June that he would work to implement the decision as soon as possible. Three months ago, Supreme Court Chief Justice Miriam Naor sternly berated the state for its continued refusal to rectify the unjust situation at the prayer site. To protest the foot-dragging in implementing the government decision, a group from Women of the Wall held a prayer and read Torah scrolls in the women’s section of the plaza Nov. 2 and then went on to pray together with men on the upper plaza of the wall. While ultra-Orthodox protesters attacked the activists, police stood and watched.

The prime minister was quick to blame the Reform and Conservative rabbis for the “unfortunate events” and for a “unilateral violation of the status quo at the Western Wall.” He did not take time to express regret or concern over the new law being proposed or to rebuke the members of his coalition who had co-sponsored it. In fact, Netanyahu failed to respond to a proposal that overturns the decision adopted by his own government and then spits in the face of the majority of American Jews and erects a high wall between them and the State of Israel.

Under the heading “Creating a Common Jewish Future,” the Diaspora Affairs Ministry states on its website that Jewish communities around the world face assimilation and the loss of their Jewish identity. Therefore, the ministry, headed by HaBayit HaYehudi Chairman and Education Minister Naftali Bennett, partnered with Project Momentum to bring delegations of Jewish women from around the world for eight-day visits to Israel. During their stay, according to the site, “They enrich their knowledge of all the different hues of Judaism.” Does that mean Bennett will introduce them to the three Knesset members of his party who signed the proposed Western Wall prohibition on equal prayer rights that perpetuates the Orthodox monopoly on Judaism? By the way, before visiting the Knesset, the women would do well to carefully measure the length of their skirts and dresses. Some parliamentary aides whose thighs were not sufficiently covered were recently sent home.

At a Nov. 8 session of the Knesset’s Interior Affairs Committee devoted to the dispute over praying at the Western Wall, Knesset member Mickey Levy from the centrist, anti-clerical Yesh Atid reported that during a round of recent meetings in the United States, he sensed “tremendous anger” against Israel and a feeling among Jewish communities that Israel had “betrayed them.” He should tell Netanyahu. It looks like the prime minister doesn’t understand that the America he knows how to move so well is no longer there.