Despite earlier agreement by religious representatives to a deal allocating a mixed-gender prayer space near the Western Wall, objections remain, with some among the ultra-Orthodox threatening to topple the government over it. 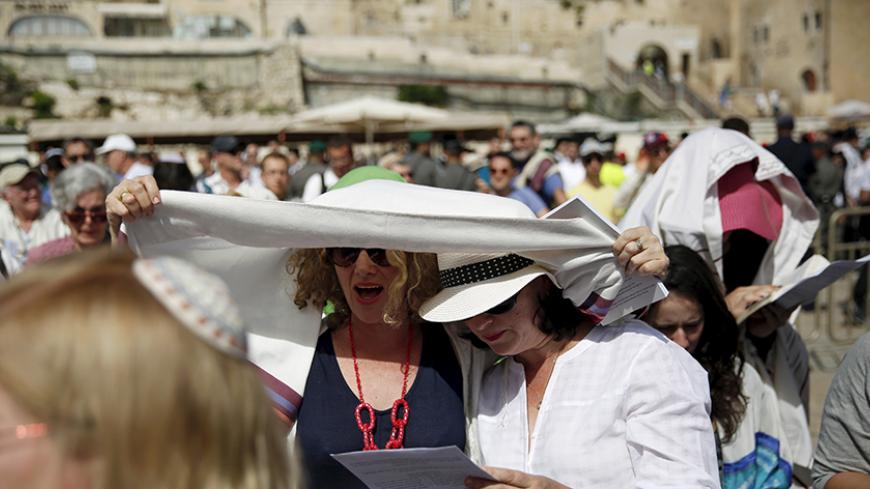 Members of the activist group Women of the Wall wear Jewish prayer shawls that the Orthodox Jewish community traditionally reserves for men during an event for the Jewish holy day of Passover near the Western Wall in Jerusalem's Old City, April 24, 2016. - REUTERS/Ronen Zvulun

The dispute over the Western Wall could evolve from a local controversy between ultra-Orthodox and liberal Jewish organizations (the Reform and Conservative streams of Judaism known as Progressive Judaism and Women of the Wall) into an unprecedented head-on confrontation between the various religious factions in Israel and could even culminate in the overthrow of the government.

Here's a summary of events: In January, the government made a historic decision to grant liberal Jewish organizations a recognized status at the Western Wall. The plan calls for the appointment of representatives on behalf of liberal Jews to the public council to be set up to manage the Western Wall prayer space, and for the establishment of a special prayer compound next to Robinson's Arch to serve this population.

The ultra-Orthodox, who were not happy with the decision, to say the least, warned Prime Minister Benjamin Netanyahu that they would leave the coalition (thus toppling the government) unless the plan is significantly modified and restricted under the law. Meanwhile, Reform organizations appealed to the Supreme Court to enforce the decision. However, in view of the ultra-Orthodox objections, the state appealed to the Supreme Court no less than eight times to put off the implementation of the plan and allow time to reach a compromise. Alas, no such deal seems to be in the offing.

Before the most recent deferral on July 5, the representatives of the religious parties in the Knesset met with Netanyahu and Attorney General Avichai Mandelblit. Following the meeting, the ultra-Orthodox made it clear that they would by no means agree to give the Reform Jews a foothold at the Western Wall. At the same time, the Reform organizations continue to stand firm and declare that they have no intention of compromising.

"I think that the ultra-Orthodox would not agree to settle for anything less than two specific principles," said Pinchas Tenenbaum, the spokesman for Chief Rabbi David Lau, who is involved in the negotiations on a compromise. He told Al-Monitor, "The first principle is a distinctly separate entrance to the prayer compound allocated to the Reform Jews, well before the entrance to the present prayer space. The second principle is the cancellation of their representation in the public council."

Al-Monitor has learned that a new compromise proposal is quietly under discussion whereby no official status would be granted to the Reform movement on the site, and the Jewish Agency would be given authority there in its place. In addition, a separate entrance leading to the section allocated to the Reform Jews would be set up to the satisfaction of all the parties concerned. Talking with Al-Monitor, senior ultra-Orthodox figures expressed approval of the proposed plan, and said that the ultra-Orthodox leadership would most likely support it.

On the other hand, right-wing organizations with Merkaz Liba leading the battle have already made it clear that they would oppose the proposed plan regardless of the support emerging among ultra-Orthodox politicians. "We will go from one rabbi to another and convince them that the plan is a sham," Liba leader Yehuda Wald told Al-Monitor. "We have researched the issue and found that the Jewish Agency is a notably pro-Reform body; and allowing it a foothold in the Western Wall compound would be the same as allowing the Reform Jews themselves a foothold in the site. The politicians are hiding this information from the rabbis, and we will expose it."

The list of those opposing the proposed compromise includes the Reform movement itself. Talking with Al-Monitor, Reform movement Rabbi Gilad Kariv clarified that he would not compromise on the issues of representation in the council and joint entrance to the site. "They are trying to drive us out," he said, "but we are not going to give up our demand for an entry to our section from within the Western Wall compound and we will not give up our representation in the public council. We will not agree to a situation where the ultra-Orthodox have a monopoly on running the Western Wall compound." Still, Kariv also implied that he would agree to certain compromises, provided that all the parties seriously discuss it together.

Meanwhile, tempers are flaring at the Western Wall. On July 7, prayers on the site by Reform Jews and Women of the Wall led to a violent incident when ultra-Orthodox worshipers jeered at them and blew whistles.

Reuven B., who asked that his full name not be divulged, one of the self-described leading activists in the "fight against the liberals" who prays daily at the Western Wall, described his own actions to Al-Monitor. "There is no organization behind us," he was quick to clarify. "I have 20 whistles in my pocket and in the women's section there are also women with whistles. Last week, Women of the Wall arrived to the site with the intention of reading the Torah. I mobilized a number of young Americans who happened to be at the Western Wall and they were excited about the idea. We started making noise and disturbing them. The police could do nothing to us, as we did not use violence. It's our right to sing and whistle. There is no law against it."

"The failure of the police to intervene is very serious in my eyes, since once the Supreme Court has approved prayers [by Reform Jews] at the site, the police must assist," said Kariv. "Anyway, we will not give up and we'll continue to send the women to pray in the public plaza. We are not deterred by those hooligans. If the police fail to protect us, we will appeal to the Supreme Court to force the police to perform their duty." Kariv added that if no fair compromise is reached soon, they would petition the Supreme Court and ask to establish a mixed-gender prayer compound inside the central prayer space.

"We will go all the way on this issue," said Kariv. Noting that about 2 million Jews are registered members of progressive Jewish communities worldwide (and another 2 million Jews define themselves as progressive without being registered, according to a Pew survey), Kariv added, "We are a huge group in the Jewish people and we are not going to let anyone to exclude us. If we are prevented from praying at the Western Wall, neither will the ultra-Orthodox be able to pray at the Western Wall."

Ongoing negotiations notwithstanding, the parties are still far from reaching an agreement. Both the liberals and ultra-Orthodox face opposition from within to any compromise. Thus, for instance, there were quite a few in the liberal community who opposed the government-approved Western Wall plan, while disagreements on the issue have led to a split in Women of the Wall. Likewise, there are various elements in the ultra-Orthodox community who are deliberately acting against any compromise on ideological grounds, although many in the leadership are willing to make a deal. No compromise on this sensitive issue may be reached or sustained as long as there is no unified position acceptable to all within the two opposing streams.