After 27 years, men and women will be able to pray together at Western Wall

After a long dispute, the ultra-Orthodox and progressive Judaism movements have reached a historic compromise on a mixed-gender praying space at the Western Wall. 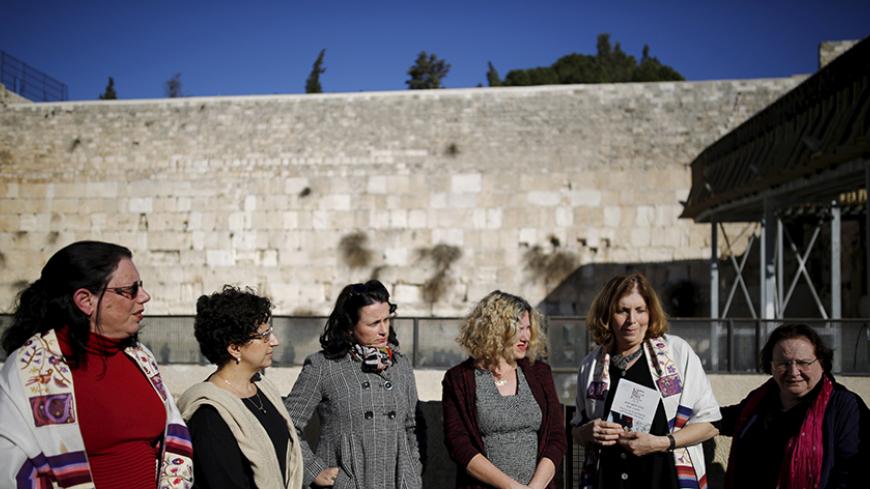 Members of activist group Women of the Wall speak to the media following the Israeli government's approval to create a mixed-gender prayer plaza near Jerusalem's Western Wall to accommodate Jews who contest Orthodox curbs on worship by women at the site, in Jerusalem's Old City, Jan. 31, 2016. - REUTERS/Amir Cohen

The Israeli Cabinet made a historic decision Jan. 31 to designate a prayer section at the Western Wall for the non-Orthodox streams of Judaism — that is, Conservative Judaism, Reform Judaism and Women of the Wall. It is intended to serve as a pluralistic service area, free of gender segregation, allowing men and women to pray together without a separating partition. This is a great achievement for the non-Orthodox movements.

Although ultra-Orthodox representatives in the government opposed the plan, they have refrained from sparking a coalition crisis over it. A senior ultra-Orthodox figure speaking on condition of anonymity told Al-Monitor, “This is a painful compromise for us, but it's the lesser evil. Above all, we were concerned that the Supreme Court would rule on the petition filed by Women of the Wall and allow them to pray in the central service section, contrary to tradition.”

Not all the affected parties, however, have been willing to accept the compromise, including a splinter Women of the Wall group. Founded in 1988, Women of the Wall has been fighting for 27 years for the right to pray and read the Torah at the Western Wall. The group split into two factions, and one of them — called the Original Women of the Wall — is the group that petitioned the Supreme Court in January 2013, seeking religious equality and the dissolution of the Western Wall Heritage Foundation, which oversees administration of the wall. The court's ruling on the petition is expected shortly.

“We believe that the plan is a shameful capitulation,” Cheryl Birkner Mack, a member of the splinter group, told Al-Monitor. “We are not interested in compromise. We seek equality. The same way every man can read the Torah and put on tefillin at the Western Wall, we, too, want to be able to do so. We want equal treatment.”

To protest the compromise reached, Birkner Mack continues to pray in the women's central service section, where tefillin and prayer shawls are forbidden. She further explained her dismissal of the compromise, stating, “Even today, anyone can pray at Robinson's Arch. So what's the great achievement here? There is one place [of consequence], and that's the traditional Western Wall. If the ultra-Orthodox seek compromise, then let them go and pray at Robinson's Arch.”

The approved plan calls for the additional section to be located just a few meters south of the northern prayer section serving and controlled by Orthodox Judaism, but on a lower level, next to Robinson's Arch, not at the wall itself. The prayer space — which also provides access to the Gate of the Moors ramp leading up to Al-Aqsa Mosque — would extend over an area of some 10,000 square feet. The Original Women of the Wall wants women to be able "to wear prayer shawls, pray and read from the Torah collectively and out loud at the Western Wall,” not to the side of the wall, at Robinson’s Arch.

Yizhar Hess, a lawyer and CEO of the Conservative Masorti Movement, calls those opposing the compromise agreement “radical elements.” He argues that what has been accomplished is indeed tremendous, constituting a historical precedent likely to have long-term implications.

“The real achievement, beyond the plan per se, is the actual recognition of Reform and Conservative Judaism,” he told Al-Monitor. “It is the first time we have been officially recognized by the government and allocated state budget funds. And what's more, a special statutory council is being set up to that end. For the first time ever, it has been recognized that there is more than one way to be a Jew!”

Construction of the new space is scheduled to begin in about a year, once the required funds are allocated, and the Knesset approves regulations for the implementation of the plan. Hess noted that his movement has asked that due attention be given to the physical visibility of the new section to highlight the precedent being set. He remarked, “Right upon approaching the Western Wall, the special entrance leading to the mixed-gender venue would be clearly visible, and further on, everyone would see our large pluralistic service area, alongside the other sections. That's a great achievement for us.”

Hess contends that had the ultra-Orthodox really sought to torpedo the plan, they could have done so under the status quo on issues of religion and state stipulated in the government coalition agreements, which grant them veto power in such matters. He observed that instead, “The ultra-Orthodox feared that the Supreme Court ruling would face them with an even more extreme situation. We, for our part, voiced willingness to meet them half way. That's the way you reach a compromise.”

Shmuel Rabinowitz, rabbi of the Western Wall and ultra-Orthodox, is not as pleased with the compromise. He told Al-Monitor that it was a sad day for the Western Wall and the Jewish people. “We are talking here of a small, fierce group that offends the sensibilities of the best part of the people, and all along, they have done everything to divide and hurt,” Rabinowitz charged. “Those familiar with the plan know that there is nothing new in it. The new section will by no means be shown as equal to the current prayer area.”

Rabinowitz said that while he opposed the plan, he would find consolation in the possible rejection of the Women of the Wall petition by the Supreme Court. If the petition is granted, the Western Wall would be equally administered by all the different currents of Judaism, not the ultra-Orthodox alone.

According to Hess, the compromise reached regarding the Western Wall might, in fact, help resolve other disputes on matters of religion and state. “Now that we have succeeded in resolving the most difficult issue of all, we will surely succeed in other arenas in which the ultra-Orthodox have a monopoly, such as marriage, conversion and [dietary laws]. In these fields, too, we strive to achieve an alternative course of action and an equal status. The decision by the current government for the first time recognizes our right to equality, and this gives us legitimacy to continue the struggle in other arenas,” Hess said.

Rabbi Yosef Eisen, who has been praying at the Western Wall day after day for 40 years now, says that the celebrations by the supporters of the plan are premature. “No one is going to pray by the southern wall,” he said. “This section will become a museum. Having made the effort and reached the Western Wall, one would want to get to the real thing, not to the imitation. In any case, if provocations at the central site stop, then it will be worth it, as in recent years, it has become unbearable. Let them celebrate in that disintegrating alleyway and leave us alone.”

In recent years, the Reform and Conservative movements have enjoyed a revival in Israeli society. A survey conducted in 2015 by the nongovernmental organization Hiddush indicated that 59% of Israeli Jews were for the official recognition of Reform rabbis. Yet, given the small size of the communities affiliated with these movements in Israel, compared for instance with those in the United States, it can be assumed that rather than identifying with their cause, the public supports them in defiance of the religious establishment, which is far from popular in Israel.

At the same time, as Hess argues, it is actually the plan approved by the government that may give these movements a push from the fringe toward the center. The ultra-Orthodox, for their part, have intimated that if they are convinced that this is what's going to happen, they will not hesitate to blow up the plan, because more will be lost than gained.