At Jerusalem’s Western Wall: 'Not Only A Feminist Battle'

After winning in the judicial arena, “Women of the Wall” prepare for the political battle over the ability to pray freely by the Western Wall. 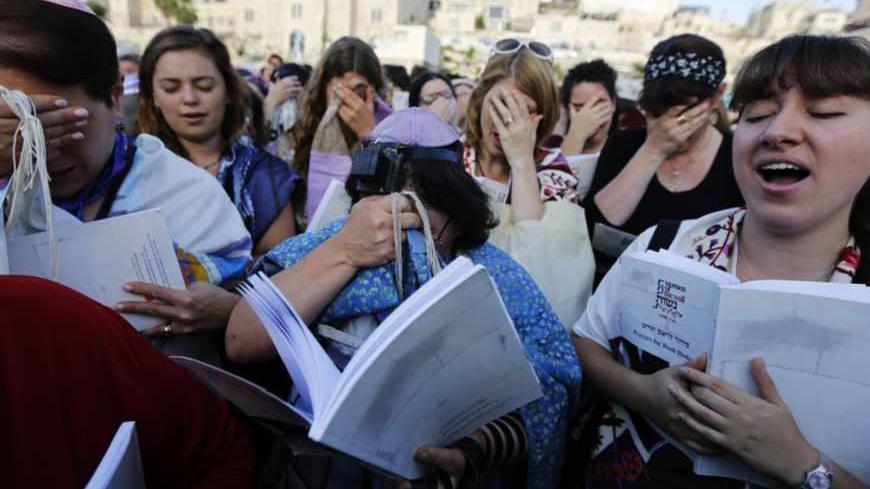 Members of "Women of the Wall" group wear prayer shawls and one (C) wearing Tefillin, leather straps and boxes containing sacred parchments, that Orthodox law says only men should don, during a monthly prayer session at the Western Wall in Jerusalem's Old City May 10, 2013. - REUTERS/Amir Cohen

“There is nothing Jewish about cursing, throwing stones and hurling bags of urine” — thus says new Knesset member Michal Rozin of the Meretz party. Together with about 300 women, all members of the “Women of the Wall” organization, Rozin participated last week [May 10] in the monthly Rosh Hodesh prayer service in the Western Wall square, for the new Jewish month of Sivan.

Rozin, together with her fellow fighters Tamar Zandberg (Meretz party) and Stav Shaffir (Labor party), emerged unscathed from the prayer service that was conducted with a police escort, but descended into a violent episode when thousands of ultra-Orthodox Jews tried to stop the women by hurling chairs, pouring liquids and throwing stones.

What sparked the recent conflict at the Wall between the ultra-Orthodox and the women was the ruling of the Jerusalem District Court on April 25, stating that women must be allowed to pray in the central prayer site freely and without limitations. The Women of the Wall have been struggling for 24 years on behalf of their right to pray at the site that is considered holy in Judaism, while wrapping themselves in prayer shawls (tallit) and donning phylacteries (tefillin). The court ruling is an important landmark in the annals of this conflict, a conflict that usually remains in the margins of what is considered newsworthy. Sometimes it is even perceived as a “provocation of left-wing secular women.”

To avert a worsening of the violence, efforts are being currently made to come to a compromise. At the center of these efforts stands Economy and Trade Minister Naftali Bennett, who also dons the hat of Religious Services Minister and toils to create special regulations that will facilitate women’s prayer in the spirit of the court. But as expected, Bennett came under immediate suspicion of the Women of the Wall and their supporters, due to three factors: that he wears a kippah [religious skullcap], that he has right-wing political affiliations, and his gender. Justice Minister Tzipi Livni also jumped into the mess and announced to Bennett that as justice minister, she has no intention of authorizing the regulations he is trying to set up against the stance of the court.

Bennett, on his part, attacked her in response and accused Livni of intentionally sabotaging his compromise efforts in order to make headlines. Thus, in effect, the legal-civil conflict of the Women of the Wall had officially segued into the political arena.

In an interview with Al-Monitor, Rozin accuses Bennett of kowtowing to the desires of the ultra-Orthodox for political interests, instead of carrying out the express directives of the court. She also explains why this struggle is of great importance to the entire society.

Why do you accuse Bennett of a political maneuver, before the regulations have even been publicized?

“I have no doubt that he is being pressured from specific political sectors. Immediately after the court’s ruling was publicized, Bennett asked for a meeting with the legal advisor to the government and the rabbi of the Western wall. He announced that he would craft regulations that would respect the Wall and its local custom. What does that mean? It means that he, a minister, does not rely on the clear verdict of the court and wants more stringent regulations. Bennett, of course, sees the members of his faction who are uneasy about the Women of the Wall.”

Rozin compliments Livni and says, “Tzipi [Livni] has adopted a brave stance. In effect, she made it clear to Bennett that the court had the last word and that she would not allow him, Bennett, to make a political maneuver. This struggle also takes place in the political backyard, as there is much fear in this country of the ultra-Orthodox. The ultra-Orthodox rabbis mobilized [Shas party spiritual leader] Rabbi Ovadia Yosef, and called on their supporters to block us with their bodies. Unfortunately, the police are also very frightened [of them].

Where do you connect to this struggle which, in the eyes of most of the public, is considered female provocation?

“From a very central place of a worldview that combines religious freedom and feminism. I believe that it is my right to deal with religion and my privilege to decide what Judaism means to me. For example, I chose to get married in an Orthodox ceremony, and Jewish tradition is very important to me. The thing is, that a situation has been created in which I have to justify myself and explain my Judaism to others. For example I was interviewed by a certain media outlet and then the correspondent asked me, 'When was the last time you stepped foot in a synagogue?'

“That question really lighted my fuse. As if he asked, ‘What business do you have with the Western Wall? What do you have to do with prayers?’ That really gets me. And it connects to a ton of other things that get me angry. My daughter comes home from school and tells me that they brought an Orthodox rabbi to the class before the holidays, and he explained to them the difference between meat and dairy. And what does my child tell me? ‘Mommy, they are Jews.’ And what are we? It’s as if we have waived the right to define ourselves as Jews.”

Rozin — with her Knesset friends Zandberg and Shaffir and with the assistance of the tail-wind provided by veteran [politician] Livni, and of Meretz Chairwoman Zahava Gal-On — display a refreshing women’s front in the Knesset. They head a civil-gender struggle vis-à-vis ultra-Orthodox male politics that is well connected in all the right places. In effect, this is the first time in many years that such a power group has been formed.

Due to your mobilization in the Knesset, the struggle of the Women of the Wall now enjoys center stage.

“The ones who turned up the heat, without using their heads, were the police. They arrested five women for investigation on the pretext that they did not comport themselves according to ‘local custom.’ The police turned to the court, and the court ruled that there is no provocation here; we are talking about quiet, peaceful prayer service. To accuse praying women wrapped [in prayer shawls] of provocation is like blaming a female rape victim for wearing revealing clothes. From the moment the judge gave his ruling, what remains now is the political problem and Livni correctly ascertained that what we have here is an attempt at underhanded political machination.

“I have been familiar for years with the struggle waged by the Women of the Wall. It is a struggle of great importance. The Women of the Wall challenge Orthodox people and the religious institutions from within. They are mostly Orthodox and Conservative, a minority is Reform.”

What is your argument, in fact?

“The argument is, and we also demonstrate this according to the halacha [religious law], that there is no prohibition on women to lay phylacteries or wrap themselves in a prayer shawl. Quite a few religious Knesset members that I spoke with admitted this fact but added that these practices are not customary. They tell me, ‘You have been dismissed from this burden, so why do you need to pray? Why are you irritating?”

So: why, indeed, must you be so irritating?

“Because when women are excluded from a certain place, it is another symptom of religious radicalization in the general society. For years, it was customary for men and women to pray together at the Western Wall. Another symptom of radicalization is not allowing women to sing at official state ceremonies. That did not exist in the past either. Each time, the status quo is violated a bit more; each time, the change is received acquiescently. So the business with the Western wall is only part of a fundamental, extensive struggle.”

What reactions do you get?

“I get both kinds of reactions. There are some who say, ‘Way to go, it’s good that you fight.’ There was even one religious Knesset member who told me, after the prayer service at the Western Wall, that it really moved her. On the other hand, there are secular Jews who tell me, “What do you need this for. We don’t need the Western Wall.’ And that’s the rub — we have transformed the Western Wall, which was a totally Israeli place in the past, to a religious site.”

Does it bother you that the ultra-Orthodox view you as the enemy?

“It is a shame, because my actions don’t come from a provocative place. They view the whole issue in concepts of ‘us versus them.’ I try to explain to them, that that is what causes the distance between us. Look at the ultra-Orthodox Jews in New York: they work and are involved. I am also against the populist discourse of ‘let’s go and draft all the ultra-Orthodox Jews.’ That comes from a place of hating the ‘other,’ and doesn’t contribute to anything. Not long ago, when I saw ultra-Orthodox Knesset Members Moshe Gafni and Menachem Eliezer Moses in the Knesset, I told them, 'you are distancing us from Judaism, instead of bringing us closer.' …

“I also told them that my son celebrated his bar mitzvah [confirmation] in a Jewish Reform ceremony, and he was forced to hear his teacher — who wears a knitted kippah [symbol of religious Zionist Judaism] — say that someone who undergoes a Reform ceremony, it’s as if he didn’t have a bar mitzvah at all. That is simply infuriating. It sends a double message. Instead of strengthening his Judaism, it cuts him off from Judaism. So, this is not only a feminist battle.”

Mazal Mualem started her journalistic career during her military service in Israel, where she was assigned to the weekly army newspaper Bamachane. After her studies, she worked for the country's second-largest Hebrew-language daily, Maariv. In 1998, she joined the English-language daily Haaretz, covering local governance, and later, she was appointed chief political analyst for that paper. After 12 years with Haaretz, she returned to Maariv as their chief political analyst.