The chairman of the ultra-Orthodox Shas party, Aryeh Deri, is working closely with left-wing and Arab parties, creating an unexpected but efficient opposition. 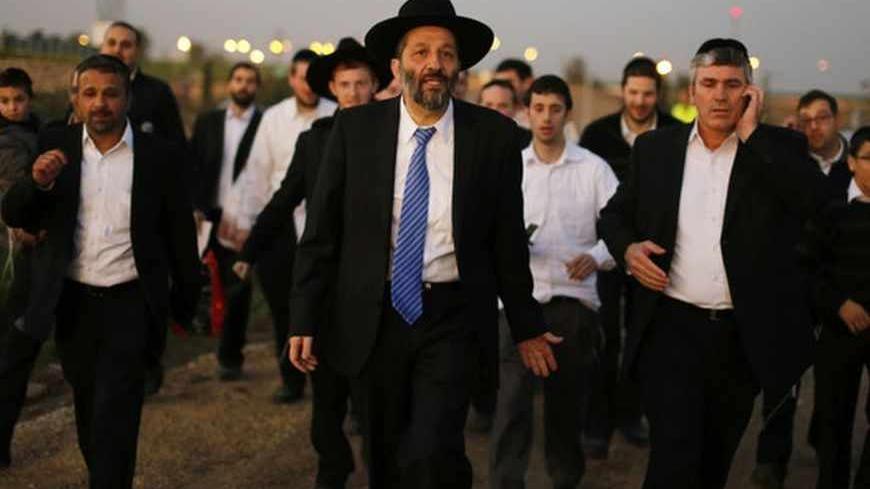 Aryeh Deri (C), leader of the ultra-Orthodox Shas party, attends an annual pilgrimage to the gravesite of Rabbi Yisrael Abuhatzeira, a Moroccan-born sage and kabbalist also known as the Baba Sali, in the southern town of Netivot, Jan. 14, 2013. - REUTERS/Amir Cohen

My conversation with Knesset Member Aryeh Deri, who was handed the leadership of the ultra-Orthodox Shas party last May, took place this past Monday, Aug. 5, one day after the government decided to remove two ultra-Orthodox settlements, Beitar Illit and Harish, from the national priority map and include tiny, isolated settlements in Judea and Samaria instead.

Deri was quick to respond sharply on his Twitter account, attacking the two “brothers," Naftali Bennett and Yair Lapid, the ministers of economy and trade and of finance, respectively. According to Deri, “They will not rest until they oust the ultra-Orthodox citizens of the state of Israel … and grease the palms of those people living in the isolated settlements.”

But as far as the head of Shas is concerned, one person is ultimately responsible for the current situation, and that is Prime Minister Benjamin Netanyahu. In an interview with Al-Monitor, Deri points to the prime minister as the person bearing ultimate responsibility for slashing budgets to religious institutions, the economic decrees and the mood of persecution felt by the ultra-Orthodox. It was the Netanyahu who betrayed the ultra-Orthodox for the sake of Bennett and Lapid, leaving Shas’s leader, Rabbi Ovadia Yosef, disappointed and hurt that Netanyahu turned his back on his longtime political partner.

On Monday, Deri instructed Shas’s legal counsel to petition the Supreme Court over the discrimination suffered by ultra-Orthodox localities in the new national priority map. He hardly speaks to Netanyahu at all, because they have nothing to say to each other. In contrast, his cooperation with the Labor Party and Meretz on social issues is excellent.

Deri came out of the saga surrounding the elections to the chief rabbinate as one of the victors, teaching Bennett a lesson in the power of old-style politics by getting ultra-Orthodox Rabbis Yitzhak Yosef and David Lau elected. Now he is stirring the pot in the elections for the local councils. He is giving the old Shas lists a facelift, even if it is causing a huge commotion in the party.

Al-Monitor:  Knesset member Deri, it seems as if you came to terms with the fact that Netanyahu won’t be asking you to join the government. You really are flourishing in the opposition.

Deri:  Still, it is a big change for Shas. There was a certain leadership for the past 13 years, and I wasn’t there. Three people headed the party in the elections, and that was good for that particular period, because it helped to prevent a crisis that would have been too big to handle. Still, I’m not certain it was especially successful.

Things have slowly started heading in the right direction over the past few months. Shas has a different style and tone now. We are fighting from the opposition benches, and preparing for the elections in the local authorities. There are significant changes there too. I am replacing most of the representatives throughout the country. I want to invigorate the forces by bringing in energetic new people, who are young and dominant and attentive to the public. Nevertheless, I am very grateful to the old-timers.

Al-Monitor:  I’m not sure that [former minister of the interior] Eli Yishai, the deposed head of Shas, feels the same way.

Deri:  I don’t know. What is certain is that our own Knesset members, who had no idea what the opposition looked like, are gradually getting used to this new situation. Take [former housing minister] Ariel Atias, for example. He was a minister from his very first day in politics, so he has no idea what it means to be in the opposition. Now he is the party chair, and he is doing a wonderful job. He gives speeches, proposes agenda items, and is involved in all sorts of opposition tactics. We function as a combative opposition faction, apart from Eli Yishai, who functions as a one-man faction. He has yet to come to terms with the change. It is still hard for him. We understand that.

Al-Monitor:  What is cooperation with the opposition factions like?

Deri:  There is cooperation within the opposition, too. It may not be homogeneous, but it is united. Even my relationship with [Labor leader] Shelly Yachimovich is good. It isn’t overshadowed by the past. In the vote on the Governability Laws, the ultra-Orthodox Knesset members sided with the Arab Knesset members, and we worked very well together. I had no problem adapting to the opposition from the very first moment, because I was out of politics for 13 years.

Al-Monitor:  What if Netanyahu suddenly calls on you to join the government?

Deri:  I don’t think that’s a realistic scenario. I don’t see there being a government crisis in the immediate future. The only government that the ultra-Orthodox could join is with the Likud and Labor parties, and I don’t see a situation in which Netanyahu shakes off HaBayit HaYehudi and Yesh Atid parties, so that he can put together a government with a different economic and diplomatic agenda. I have a hard time believing he will do that.

Al-Monitor:  The price that you are paying for that pact is enormous.

Al-Monitor:  Have you had a chance to talk to Finance Minister Lapid?

Deri:  No, he decided that he doesn’t want to talk to me. I am sad to say that it is quite obvious that Lapid’s greatest achievement was keeping the ultra-Orthodox out of government. It was also the greatest achievement of the pact he made with Bennett. That is why Lapid responds to him and is following his lead when it comes to the settlements. The background to all that is political. The problem is that it is creating an enormous rift among the people. Lapid manages to do it cleverly, with a smile on his face. He presents himself as someone who takes care of the ultra-Orthodox community, but he hasn’t tried to speak to a single one of us yet. It is as if he is speaking to the ultra-Orthodox over our heads. He issues terrible decrees against them, and then he tells them that they are for their own good. He’s playing games with them.

Al-Monitor:  And what do you think about the million-dollar question? Did Netanyahu cross the Rubicon? Can he reach an agreement with the Palestinians?

Deri:  I don’t think that Netanyahu believes in the diplomatic process. Instead, he is focused on the negotiations themselves. I don’t believe that an agreement with the Palestinians is realistic at the moment, though I hope I’m wrong about that. I just don’t think that it is possible to reach a permanent arrangement in these negotiations. I believe that we have to try to reach a long-term interim solution, which will eventually lead to a permanent arrangement, but which will allow us to be safe and which will ensure that we don’t abandon territories for the sake of getting, God forbid, terrorism. But even that the government cannot do in its current configuration.