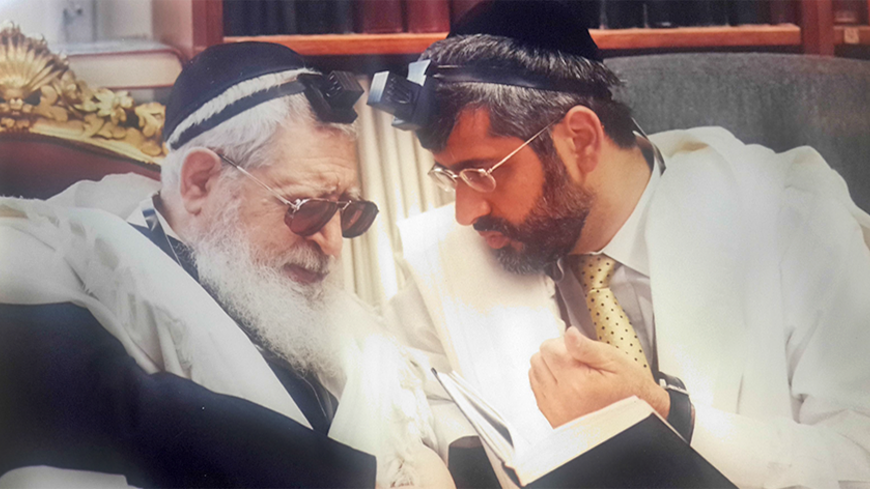 The Hebrew year 5774, which draws to a close on Sept. 24, was undoubtedly the toughest year that Knesset member Eli Yishai, the former head of the Shas Party, ever experienced in his political career. The passing of the movement’s spiritual leader, Rabbi Ovadia Yosef, at age 93 on Oct. 7, 2013, left Yishai vulnerable to attacks by his replacement, Shas leader Aryeh Deri, who had prodded the rabbi to remove Yishai as party head.

But nothing could have prepared Yishai for the series of humiliations that would befall him, one after the other. He was denied the privilege of speaking at the rabbi’s funeral, even though he had a close relationship with the rabbi, who was very fond of him. Later, he was forcibly removed from any position of influence within the party, and his people in it were “eliminated.” In many cases this meant that they lost their sole source of livelihood, but there was nothing that Yishai could do to help them.

At age 34 he was appointed minister of welfare, and at 37 the late rabbi appointed him as Deri’s replacement to head the Shas Party, after Deri was convicted of criminal offenses and resigned from political life in 1999. Now, all that is left for Yishai to do is to grind his teeth and wait. He made a commitment not to speak about internal party issues during the year of mourning following Yosef’s death.

Meanwhile, Shas is declining in the polls, and it seems as if Deri is unable to live up to expectations. But Yishai just grinds his teeth and waits in silence. As a politician he is jaded enough to know that he must not give Deri any reason to blame the current situation on him. According to senior members of Shas, it is only a matter of time before the feud between them goes public. They say that the deep divisions between Deri and Yishai at the very top of the party are far from being resolved, and that the chances of seeing Yishai continue in the party under Deri’s leadership are slim.

In an interview with Al-Monitor Sept. 16, Yishai talks about how deeply he misses Yosef, and the warm relationship he maintains with Prime Minister Benjamin Netanyahu, even though the prime minister left the ultra-Orthodox parties out of the coalition. According to Yishai, Netanyahu would like to remove Finance Minister Yair Lapid from the coalition and bring the ultra-Orthodox parties in to replace him, but Yishai doesn't think this is politically feasible. If that does become an option, however, Yishai plans to recommend to the movement’s Council of Torah Sages that they stay out of the coalition.

Al-Monitor:  Almost a year has gone by since Rabbi Ovadia Yosef passed away. What has changed, as far as you are concerned?

Yishai:  A lot has changed. As a child, I was raised on his lap. I was used to consulting with the rabbi every morning, and sometimes even two or three times a day. I shared a meal with him every Sabbath for 15 straight years. My wife, my children and I felt at home by him, and he was like a father to us. I really miss his wisdom and his ingenuity, his advice and his blessings.

I was used to consulting with him on every issue, and I miss that too now, even though, over the past few years, he often told me, “Do what you think is best.”

There’s a very strong sense of being orphaned, both personally and for the movement. We all knew that things wouldn’t be the same once he passed away. Shas before that is not the same as Shas after that.

Al-Monitor:  You’re a political person. You see the current situation in Shas. There are polls that give you only seven seats. You failed in the municipal elections, and you don’t stand out in the opposition.

Yishai:  It makes me very sad, and it really worries me, but I have no intention of speaking about it until a year has passed [from the time of the rabbi’s death].

Al-Monitor:  There is talk now about the possibility of Netanyahu trying to bring you into the coalition to replace Finance Minister Yair Lapid. Do you speak to the prime minister?

Yishai:  I speak to Netanyahu, but I also find it very sad that this government employs piggish capitalism against the weaker sectors of the population and the middle class. I feel as if Netanyahu wants the ultra-Orthodox in the coalition. If he had to choose, he would choose us.

Obviously, it is the Council of Torah Sages that will ultimately decide whether we join the government or not, but I will recommend to the rabbis that we do not join it.

Once again, the poor were victims of budget cuts after the last war. I don’t see this government doing anything on their behalf. I also don’t think that the [ultra-Orthodox] Yahadut HaTorah Party will join the government without it first repealing sanctions against ultra-Orthodox men who do not enlist in the military. And Netanyahu cannot uphold a government without Lapid [who was at the origin of this sanctions policy]. So it is true that Netanyahu is trying to get closer to the ultra-Orthodox, but I don’t think he has a chance.

Al-Monitor:  Netanyahu betrayed the ultra-Orthodox. Are you pleased when you see how divided his government is now?

Yishai:  It’s not that we’re happy at his misfortune. It’s more like we realize that this government won’t last very long. It could last maybe two years.

This is a hybrid coalition conceived in sin. Lapid wanted a coalition without the ultra-Orthodox, and Economy and Trade Minister Naftali Bennett wanted to be in the coalition no matter what the cost, so the two of them made a pact and joined the coalition together. Look what happened during the war. Look at all the leaks. I’ve been hearing from people in the prime minister’s office that Netanyahu longs for the kind of Cabinet that he had in the past, a Cabinet made up of experienced individuals who knew how to make decisions. Now his ministers hold press conferences at his expense instead. These kinds of things never happened before. Netanyahu is accepting of it because he has no choice. The minute he stops accepting it, his government disintegrates.

Al-Monitor:  If we’re already talking about the Cabinet, you are one of the most experienced people in the country today when it comes to matters of security and diplomacy. You were a member of several Cabinets, and were part of the “octet” of top ministers. Do you think the defense establishment’s demand for a budget increase is justified?

Al-Monitor:  That’s what Lapid is saying now in the fight over the budget.

Yishai:  You can’t compare the two of us. His party rose because of the social struggle, but it is actually causing harm to both the middle class and the weaker sectors of the population. His zero-percent VAT plan paralyzed the economy and destroyed the entire real estate market. Instead of that, he should have marketed the land at a cheaper price. After all, contractors build on state land.

Al-Monitor:  You were in the government. Why didn’t you advance a different solution?

Yishai:  That’s right. We had an influence on many things, and we had a lot of achievements, but we [Shas] never had a finance minister. Based on my experience in quite a few governments, it is the Finance Ministry that runs the country. If Lapid wasn’t finance minister, he never would have presented that plan.

Al-Monitor:  So Netanyahu is not to blame.

Yishai:  I blame them all. Netanyahu is the prime minister. I can’t blame Lapid and Bennett without blaming him.

I tell him everything when I see him in the Knesset. I explain to him why I feel so much pain. On the one hand, I don’t want to defend him, but on the other hand, it is clear that as finance minister, Yair Lapid has an enormous amount of power and influence. He is spearheading all the harsh decrees against the weaker sectors of the population.

I have a good personal relationship with Netanyahu, but at the same time, I represent a certain public. I am a representative of that public, and I have to benefit both the public that voted for me and the weaker sectors of the population. I don’t work for Netanyahu, and I’m not a member of the Likud Party. Unfortunately, the current coalition is very cruel, very capitalist and very predatory.

Al-Monitor:  It’s said that you want to break up Shas.

Yishai:  I won’t talk about what is happening in Shas. I made a commitment to myself not to say a word about it for a year. Once the year is over, however, I will say what needs to be said. What is true is that I have been a member of the Shas movement since the day it was founded. I have filled every position in it, and I will do everything to unite all the factions.