Alex Mintz, director of the Institute for Policy and Strategy at the Interdisciplinary Center in Herzliya, explains that accepting the Arab Initiative “with reservations” is needed, as it “would weaken Hamas and the Iranian axis” while opening regional negotiations. 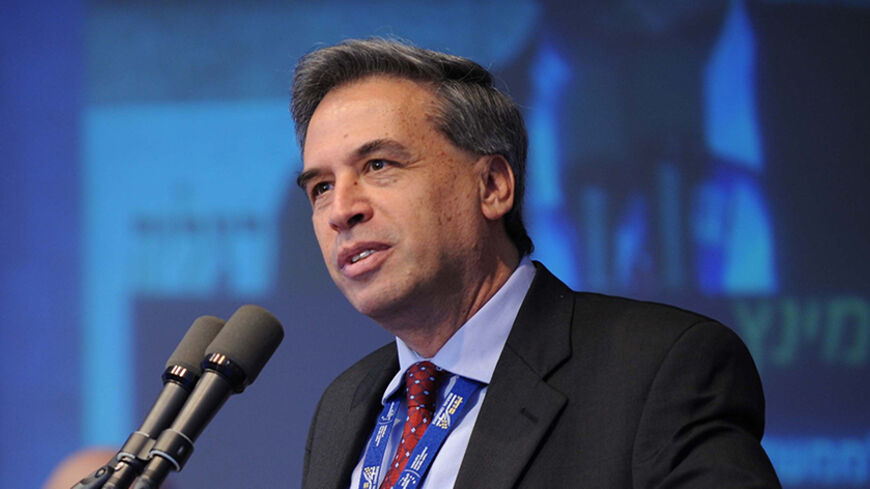 Alex Mintz, director of the Institute for Policy and Strategy (IPS), speaks at the Herzliya Interdisciplinary Center, 2014. - Office of Alex Mintz

Toward the end of Operation Protective Edge in the Gaza Strip on Aug. 18, a group of highly regarded academics sent a letter to Prime Minister Benjamin Netanyahu. These educators, who come from the discipines of political science and international relations, called on Netanyahu to declare his acceptance of the 2002 Saudi Initiative, subject to reservations in four areas: Jerusalem, Palestinian refugees, the demilitarization of the West Bank and Gaza and territorial swaps.

Their call was based on the realization that the most recent conflict with Hamas highlighted the existence of a moderate bloc in the Middle East, which fears the growing strength of Islamic extremist groups and the arming of Iran. This bloc includes Egypt, Saudi Arabia, the Gulf States (apart from Qatar), Jordan, the Palestinian Authority and the Arab League.

The 15 academics who signed the brief letter described the many advantages of such a move. According to them, accepting the Arab Initiative will, among other things, lead to the isolation of Hamas and the weakening of the Iran-Hezbollah-Syria-Gaza axis, while improving Israel’s reputation in the world.

Netanyahu has yet to respond to the letter and there are no indications that he intends to follow its advice. For their part, the professors have no intention of letting up. They consider this to be a rare and fleeting opportunity to improve the economic and security situation of Israel at a relatively low price. Other voices from both inside and outside the political system have expressed support for the professors’ letter. They all call for a return to the Arab Initiative, even though it has been ignored by almost every Israeli prime minister since its release.

Alex Mintz, director of the Institute for Policy and Strategy at the Interdisciplinary Center in Herzliya, instigated the letter. In an interview with Al-Monitor, he said that by accepting the Arab Initiative, with reservations, Netanyahu will enable Israel to use diplomatic means to weaken Hamas and advance efforts to prevent Iran from obtaining nuclear weapons. He said, “A declaration by Netanyahu stating that he agrees to accept the Arab Peace Initiative with reservations and is willing to negotiate with the Arab League would change Israel’s status in the world within an instant, without it actually having to do anything. It would lift Israel out of its isolation, and of course, it would have a positive impact on the economy.”

Al-Monitor:  In your letter to the prime minister, you propose that he should not accept the Arab Initiative verbatim, but that his acceptance of it is subject to reservations. What did you mean by that?

Mintz:  We are aware of the fact that the prime minister is unable to accept the program verbatim, because that would lead to the break-up of his coalition. That is why we encourage Prime Minister Netanyahu to accept the Arab Peace Initiative with reservations with regard to four areas: Jerusalem, territorial exchanges and borders, the demilitarization of the Palestinian areas and refugees. As soon as Netanyahu makes a declaration that he accepts the plan subject to certain reservations, it will be possible to begin negotiations in Egypt over those four points. That will at least start providing some positive momentum to the process. The Arab League and the Saudis will respond. The Saudi foreign minister actually spoke about that just three weeks ago.

The moderate bloc shares common interests when facing Iran, Hamas and the Muslim Brotherhood, as well as the rising tide of Islamic State radicalism. Under the leadership of the United States and Egypt, we have an opportunity to form a coalition between Israel, the Palestinian Authority, Saudi Arabia, Egypt, Jordan, the Gulf States apart from Qatar, and of course, the Arab League.

Al-Monitor:  And where do you think Israel stands right now?

Mintz:  The problem as it stands now is that Israel has been ignoring the initiative, and as a result, the Saudis are looking at other options, even in their dealings with Iran vis-a-vis radical elements in the region. They won’t wait forever. They have been sending out feelers to the Iranians and doing even more than that, which means that we could come out the losers twice. The Saudis are looking at their own interests. They are very concerned about Iran, which is laughing all the way to a nuclear bomb right now. Unlike Qatar, which takes every side, the Saudis are actually interested in a coalition with friends like Egypt, Jordan and the Palestinian Authority. What we have here is an accumulation of interests. In my opinion, a statesman should take a closer look at them and see them as an opportunity.

A military leader is not just someone who excels on the battlefield. It is also someone who knows how to create options to forge alliances and to follow a diplomatic track, which in our case could lead to the weakening of Hamas. That is why there is an important card here as far as Netanyahu is concerned. That is how he can sell the Saudi Initiative to the Israeli public. As far as Israel is concerned, such a move would weaken Hamas and the Iranian axis at once, and that’s a very important objective for Netanyahu.

Al-Monitor:  You sound as if you believe that this window of opportunity could slam shut very quickly.

Mintz:  Things happen very quickly in the Middle East. The diplomatic constellation of today is one thing, but it can vanish easily by tomorrow. Right now, there are common interests when confronting the wide range of threats faced by Israel, and unfortunately, these are only expanding. We now have the radical Islamist organizations, which we should try to neutralize through formal alliances, but we must also weaken Hamas and the Iranian axis through diplomatic means, rather than going from one round of fighting to the next, from one conflict to the next.

I also think that Iran and Hezbollah both have a goal of arming the West Bank. If they succeed in doing that, what we saw during Operation Protective Edge will be little more than child’s play. Those people don’t stop making progress.

Iran was the big winner in Operation Protective Edge because it drew attention away from the Iranian nuclear program. And it all happened in just seven weeks. Suddenly, Iran and the United States share common interests when it comes to the Islamic State.

Al-Monitor:  With Netanyahu locked in a right-wing coalition, how could he accept the Arab Initiative?

Mintz:  I claim that a declaration that he accepts the Saudi Initiative with reservations would not bring down the government. Those reservations will allow him to preserve Israel’s national security interests. The wisdom is to avoid going into detail about those reservations. There is no reason to be specific. All of that could be left for the negotiations. The reservations will make it possible to start talking, because no one is giving up anything for now.

It is more a case of creating positive momentum. It means signaling to the other party that you are ready to talk. We also think that the statement and the call for talks should come from Netanyahu. Under those circumstances, the other side will not say no. After all, they are also eager to do something about the issue. Even Foreign Minister Avigdor Liberman came out in favor of this, as did the former head of the Shin Bet, Science and Technology Minister Yaakov Peri; Knesset member Ofer Shelah; and former head of the Mossad Danny Yatom.

Al-Monitor:  The Arab Initiative was proposed over a decade ago. Is it still relevant?

Mintz:  I say that not only is it still relevant, but that this is the time to do it, because the circumstances will never be better. I claim that Hamas, Hezbollah, with the support of Iran, will try to topple [Palestinian President] Mahmoud Abbas once again, and we’ll end up with Hamas and Iran in the West Bank, and in a big way at that. It’s hard to tell what each day will bring in the Middle East, but this looks like a good time to take advantage of the talks led by Egypt, which are scheduled to take place in Cairo, and to put a process into motion that could weaken Hamas in a single blow. Such a coalition is Hamas’ greatest nightmare.

Al-Monitor:  As an expert in political marketing, how would you recommend Netanyahu sell this idea to the Israeli public?

Mintz:  It is relatively easy to sell it to the general public. Netanyahu’s problem is opposition to any concessions inside the Likud Party and other parties of his government. Selling it to the public would shift him closer to the center. What he is doing now is fighting against [Economy and Trade Minister] Naftali Bennett and Avigdor Liberman for the votes of the right, with anyone who wants to vote for an authentic right-wing party supporting Bennett. On the other hand, a statement from Netanyahu that he accepts the Saudi Initiative will bring him plenty of votes from the center. Experience shows that leaders who strive to bring peace see their popularity soar sky high.

Netanyahu is a real artist when it comes to getting Israel’s views across. He should emphasize that the move is intended to weaken Hamas and the dangerous alliance led by Iran. He can even wink at the right and say, “I’m not doing anything,” because he has his reservations after all.