Poll suggests Israelis could be sold on Arab League Initiative

A poll conducted ahead of a major Israeli political conference examined the extent of the Israeli public’s exposure to the Arab Peace Initiative, and findings indicate that most Israelis are ignorant of the details of the plan. 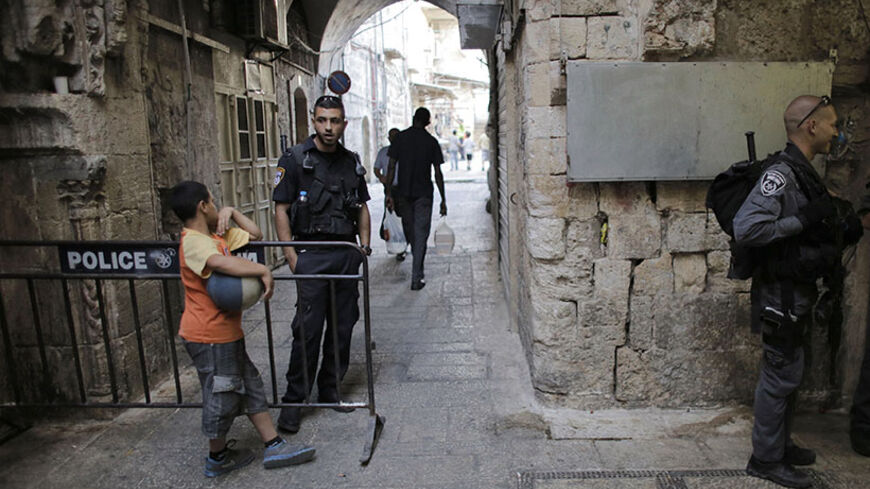 A Palestinian boy stands next to an Israeli policeman at a police barrier in Jerusalem's Old City, June 2, 2014. - REUTERS/Ammar Awad

The Arab Peace Initiative, also known as the Saudi Initiative, is a far-reaching diplomatic plan for ending the Israeli-Palestinian conflict. The Arab League confirmed it back in 2002, but despite its great importance, only one in eight Jews in Israel is familiar with its details. This interesting fact emerges from a poll conducted by Mina Tzemach for the Institute for Policy and Strategy at the Interdisciplinary College in Herzliya.

The poll, to be presented at the 14th Herzliya Conference opening June 8, is published here by Al-Monitor for the first time. It included a representative sampling of the Israeli public, questioning 500 people and allowing a 4.4% margin of error. Its findings provide an evidence-based tool to debate a series of questions: Why is the initiative, adopted by 28 Arab states and on its face a possible significant platform for negotiations, barely known among the Israeli public? What is the reason behind almost all Israeli decision-makers having ignored the initiative? Is there a way to break the “conspiracy of silence” surrounding it? And why have its public relations so far been so problematic?

The Herzliya Conference is a favored platform for policy statements by politicians. It was there that then-Prime Minister Ariel Sharon revealed the disengagement plan from Gaza in 2003.

This year, along with international experts, participants include President Shimon Peres and former Prime Minister Ehud Barak, who has made few public appearances since retiring from politics in 2012. Discussion of the Arab Initiative is designed, among other things, to promote solutions for the stalemated Kerry initiative.

The Arab Initiative was born against the backdrop of the events of September 11 and approved in March 2002 at the Arab League summit in Beirut, at the height of the second intifada. The plan is fairly simple: Israel will fully withdraw from Judea and Samaria, the Gaza Strip, East Jerusalem and the Golan Heights; an independent Palestinian state will be established on these areas with East Jerusalem as its capital; a “just solution” for the refugee problem will be found and agreed upon. In return, Israel will be granted diplomatic and economic normalization of its ties with the entire Arab world, with all it entails.

While the current negotiations are falling apart, the Arab Initiative, which is reaffirmed every year by the Arab League, is still on the table, but doesn’t generate any interest. At the same time, by any measure, the Israeli public feels alienated from the diplomatic process and does not believe Palestinian President Mahmoud Abbas and the Palestinians are true negotiating partners. In an interview with Al-Monitor, former Deputy Defense Minister Ephraim Sneh said that attitude was the result of brainwashing of Israelis by their decision-makers in recent years.

According to the poll, the leadership in Jerusalem has managed to convey to the public a sense that “there’s no partner” on the Palestinian side. As a result of the leadership’s disregard for the Arab Initiative, very few Israelis have been exposed to it. The findings show that one-quarter of those polled have heard of the plan, but they don’t know its contents.

Apart from questions that examined the extent of the Israeli public’s exposure to the initiative, the poll also measured support for a peace plan based on its principles without specifying the source. The respondents were presented with details of the plan and were asked whether it could serve as a basis for a peace process between Israel and its neighbors. There was no mention of the initiative being of Arab origin so as not to create a negative bias.

When asked, “If this peace proposal clearly stipulates that Israel will have the right to veto a return of refugees, would you support this proposal?” there was a significant change in the results, with 43% saying that they would support the initiative and 49% that they would oppose it.

“This finding proves that when you set aside the refugee issue, support for the initiative rises,” says professor Alex Mintz, the dean of the School of Government at the Interdisciplinary Center, who initiated the poll. “Israelis are afraid that a flow of refugees will flood the country, and when you explain to them that a solution will only be reached by agreement, the whole attitude changes.”

Professor Alex Mintz, Dean of the Lauder School of Government, Diplomacy and Strategy, within the Herzliya IDC, speaking at the Herzliya Conference, March 2013

Mintz is one of the world’s leading authorities in the field of political decision-making and diplomatic negotiations, and he naturally attributes great importance to the psychology of negotiations and to the way they are marketed to the relevant public. “Let’s say that the refugee issue is presented as a tremendous achievement, as a type of concession on the part of the Palestinians — the whole psychology of the initiative could then change,” he said.

A portion of Al-Monitor's conversation with Mintz follows:

Al-Monitor:  Why did you decide to focus on the Saudi Initiative in the poll?

Mintz:  First of all, because the negotiations are stuck, and apparently they must be moved to a different path to prevent the dangerous collapse. The thing is that right now there’s no price for Israel’s presence in the territories. There’s no terrorism, and boycotts don’t really affect the Israeli public. Given the current state of things, the Israeli leader has nothing to gain, either. The opposite is true. In the current game, [Prime Minister Benjamin] Netanyahu will only lose his approval from the right.

That’s why the equation has to be changed. Israelis have to be sold on the Arab Peace Initiative as something that’s worthwhile, and the solution to the refugee problem could be that big something: a joint Israeli-Arab League veto of the return of refugees in addition to formal diplomatic relations, including ambassadors from 28 Arab states and trade and economic ties between Israel and these states, which is an economic bonanza.

Al-Monitor:  And who will do the marketing?

Mintz:  That has to come from the Arab states, the Arab League. I come from the study of decision-making and if I analyze the current situation, then from the standpoint of the Israeli public and its leaders, there’s no return for the diplomatic process. That’s why the other side has to show that it is making a concession and giving something huge. The Saudi plan contains that element. The Arab League has to come out with a strong statement, and that way the cost-benefit psychology will be reversed, as far as the Israeli public goes.

Al-Monitor:  Former Prime Ministers Ariel Sharon, Ehud Olmert, Ehud Barak, Prime Minister Netanyahu and many other Israeli decision-makers in the past decade ignored the Saudi Initiative and gave it the cold shoulder. Former Minister Meir Sheetrit, one of its most prominent advocates, recounted how he failed over and over to convince them to go for it. Do you have an explanation?

Mintz:  It’s not out of any ill will. It’s a question of conception. If someone from the Arab League were to put the initiative on the table now in a way that the Israeli public and leadership could understand what they stand to gain, a change could come. I think this could be a tremendous opportunity. It’s a matter of marketing, like a deal.