In an interview with Al-Monitor shortly before the commemoration of Yitzhak Rabin's assassination, his son Yuval Rabin called for a regional agreement. 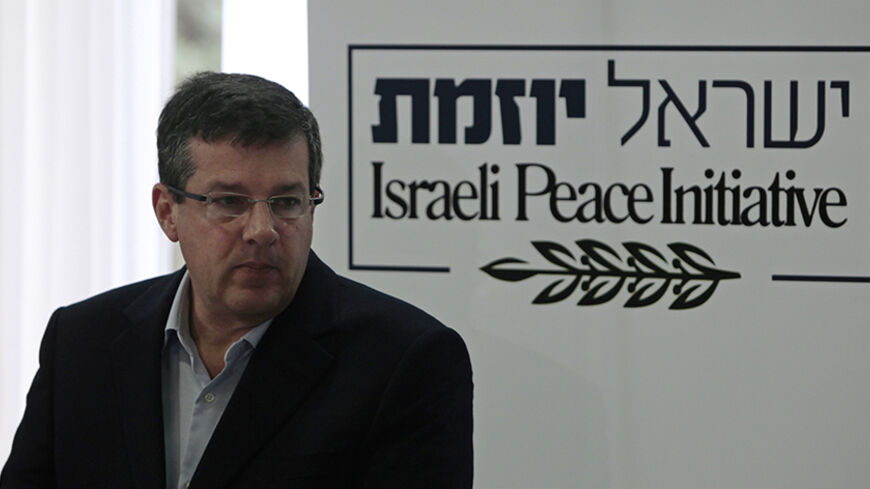 Yuval Rabin, son of late Israeli Prime Minister Yitzhak Rabin and one of the co-founders of the Israeli Peace Initiative, takes part in a news conference in Tel Aviv, April 6, 2011. - REUTERS/Baz Ratner

When asked whether he can truly envisage a scenario in which Prime Minister Benjamin Netanyahu, who heads a distinctly right-wing government, would initiate diplomatic negotiations on a regional arrangement between Israel and the Arab states, Yuval Rabin says, “It’s not so far-fetched.”

In an interview with Al-Monitor before the memorial ceremony marking the 19th anniversary of the assassination of his father, late Prime Minister Yitzhak Rabin, he says, “Bibi [Netanyahu] was the one who talked about new regional opportunities — before and after Operation Protective Edge. That’s why he should be held to what he spoke about, and now is the time.”

This year, the main commemoration event on Nov. 1 at Rabin Square in Tel Aviv is being organized by the Israeli Peace Initiative, of which the younger Rabin was a co-founder in 2011, along with Science, Technology and Space Minister Yaakov Peri. Rabin will also be a main speaker at the rally, along with former President Shimon Peres. They will send a political message designed to push the government to launch a regional diplomatic initiative.

Will the rally reawaken the Israeli public and succeed in restoring hope for peace with the Palestinians? Rabin is convinced that so many years after the 1993 Oslo accords, the rounds of fighting in Gaza and Lebanon and the deep resulting budgetary shortfalls, “the Israeli public will understand that there is no other solution.” In that respect, the rally will measure the “Israeli street’s” willingness to reconnect with this agenda, which has eroded in recent years and is now perceived as anachronistic and naive. It is perceived as such to the extent that even the Israeli left distanced itself from this hot potato in the last elections.

Al-Monitor:  Do you really think that you will be able to influence Netanyahu, whose government includes Economy and Trade Minister Naftali Bennett and Foreign Minister Avigdor Liberman, and that’s even before we know whether he actually wants a diplomatic arrangement?

Rabin:  Yes. After all, Bennett is his only threat in this sense. Liberman is already talking differently. I don’t see any reason for Netanyahu not to make a move that will result in Bennett’s removal from the government and, in return, he’ll have a government with Buji [opposition leader Isaac Herzog], [Finance Minister Yair] Lapid and [Justice Minister Tzipi] Livni. It’s not so far-fetched, if we manage to put together such a partial coalition of Knesset members who can bring pressure to bear on him.

At the rally, we’ll be calling on the government to make good on what it says. After all, Bibi spoke of new regional opportunities. Everyone saw the role that Egypt and Saudi Arabia played in Operation Protective Edge, and what roles they are capable of playing.

I think many people understand that we share the same fears of the same threats with all these countries, and they may be even more fearful than we are about the Islamic State and a nuclear Iran. Then there’s also the economic price of the mini-wars with Hamas every 18 months or two years, which we cannot sustain for long.

We think the public must be made aware of these things to unblock this mental fixation. For example, one has to tear off the mask that says, "We don’t talk to Hamas." What does that mean, "We don’t talk?" You conducted negotiations with Hamas at the end of Operation Protective Edge, you talked to them about Gilad Shalit, so now you don’t talk? We want the public to know that there’s an interlocutor on the other side.

Al-Monitor:  Judging by the polls, most of the public is on the right.

Rabin:  That doesn’t bother me. Our polls indicate that any leader who presents a proposal in the spirit we suggest will get 65-70% support. The proposal says that the solution has to be regional and not bilateral. We and the Palestinians have failed enough times to reach an agreement, and for obvious reasons: We don’t trust them one bit, and they are unable to make the difficult decisions. And they say as much. That’s why a regional umbrella is required. That, of course, includes all the good things envisaged by the Arab Peace Initiative: normalization of ties with the Muslim world and an end to the conflict.

Al-Monitor:  How do you respond to the claim that “there’s no partner” on the other side? Even Justice Minister Tzipi Livni said something in that spirit, and this contention was reinforced by the speech President Mahmoud Abbas gave at the UN.

Rabin:  All these statements were valid for that moment. Think about it — if someone had conducted a poll a month before the 1978 Camp David summit, would anyone have been willing to give up all of the Sinai [Peninsula]? I think Mahmoud Abbas' speech was unfortunate and unnecessary, but his actions speak for themselves. After all, you can take a million speeches made by Bibi and Bennett and Liberman and also say there’s no partner in Israel. In fact, other than former Prime Minister Ehud Olmert, all the prime ministers elected since the assassination are avowed Oslo opponents. Bibi, Ehud Barak, late Ariel Sharon … What would we have said if Mahmoud Abbas had objected to Oslo at the time?

I believe that it takes actions to create partnerships. Since there is no dialogue between the leaders, clearly nothing can happen, hence the claim that there is no partner. "Initiative" is the key word, and Israel completely gave up any initiative since November 1995, except during Olmert’s time. If we wait for an American president to come and do something, it won’t happen.

We are targeting all of the Israeli public. Right now people are tired, or don't know, or they don’t care, but they do know what’s happening in terms of the economy. They do understand that we have been played on the budget issue, which deferred to next year having to deal with the deep budget shortfalls. People have to wake up and understand that absent a diplomatic initiative, there will be no economic solution.

Al-Monitor:  First of all, you have to convince the left, which turned a cold shoulder to the diplomatic agenda in the last elections.

Rabin:  Sadly, the left gave up and did not defend Oslo. It spooked itself. But [former Labor Party leader] Shelly Yachimovich paid a price for that and I think Lapid has also realized his mistake. He has become one of the most ardent supporters of the regional conference, and I assume he understands today that his career is over if it only depends on his performance at the Treasury.

People talk to me about the disengagement and say, "We gave Gaza and got rockets in return." What, there were no rockets before? Nonetheless, Arik Sharon, the founding father of the settlements, withdrew from Gaza as a Likud prime minister. Why? Because things were great there?

We have to raise our heads and talk about the diplomatic issue. I don’t accept the assumption that Oslo led to terrorism. My father would not have been elected if things had been good here, if this had been a paradise. [Yitzhak] Shamir was prime minister and there was terrorism and knifings, and diplomatic, economic and national paralysis, and the government was changed by elections, not by a gun.

Al-Monitor:  After 19 years, are there things you see differently?

Rabin:  On the contrary. I am becoming more and more persuaded and convinced that absent a change in priorities, and unless we find ways to increase our resources for dealing with social issues, we’ll have a problem on our hands. People are nostalgic for the pre-Oslo days, but no one talks about the economic price of those days. Anyone suggesting that the Oslo accords be canceled must also elaborate on the budgetary implications of running the health, education and sewage systems of another 3.5 million people.

The debate today is over the price of Milky [chocolate pudding] in Berlin, but I think that even before that, we have to conduct a serious debate about the diplomatic issue. We have to raise our heads, open our eyes and not to give in to intimidation. History shows that we have made peace with enemies who were far worse. The government’s job is to find partners to confront the various challenges. Our security will be secured by a coalition that fights against the same crazy terrorists. Like my father’s well-known saying that defense is not only about tanks, planes and missile boats: It’s about the neighborhood, the street, the school.