In an interview with Al-Monitor, Kadima Knesset member and former Shin Bet official Israel Hasson warns of Israel's humiliating approach to Palestinian President Mahmoud Abbas and predicts that if negotiations blow up: "The Arab Spring will get to the West Bank.'' 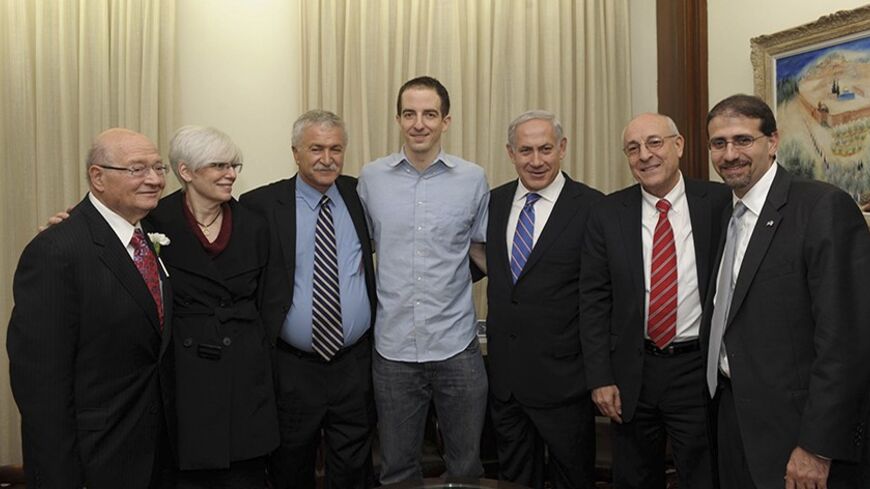 The reports on Friday morning, April 4, about attempts to resuscitate the negotiations that this week entered an inevitable crash trajectory, took Knesset member Israel Hasson back to the early morning of Nov. 5, 1995, eight hours after the assassination of Prime Minister Yitzhak Rabin.

Hasson, at the time head of the Judea, Samaria and Jerusalem regions' command of the Shin Bet, convened his staff for an assessment of the situation. Naturally, the atmosphere was influenced by the bruising blow suffered by the organization, which had failed to defend the prime minister, against the backdrop of the political upheaval that had already begun and would bring Benjamin Netanyahu to power within six months.

In an interview with Al-Monitor on April 4, Hasson recalled the political prediction he made that morning, which turned out to be correct in the ensuing years. “I told them that we are now entering a period of 15 to 20 years of leadership turmoil. … It was clear to me that morning that our leadership boat would be tossed on the water, without knowing which shore it would reach, because other than Rabin, there was no leader of that stature to bring about a major change with the Palestinians. And then, in 1996, there were the Likud and [Benjamin] Netanyahu, and then Ehud Barak, and since then the Likud in different variations. Did any of them know where they were going?”

As deputy director of the Shin Bet, Hasson continued to follow the leadership crisis, and when he got out, he turned to politics. At first, he found himself in Yisrael Beitenu, Avigdor Liberman’s party, but after falling out with the foreign minister, he moved to Kadima, where he holds one of the two Knesset seats that the party got in the last elections. Together with party chairman Shaul Mofaz, the former defense minister and army chief of staff, even in Kadima’s shrunken version, it has dozens of years of priceless diplomatic and defense experience, which unfortunately are not being used by the country’s leadership.

Hasson is one of the Israelis with the best ties to the Palestinian leadership. The conversation with him, on the morning after the accusations between Israeli chief negotiator Tzipi Livni and Palestinian chief negotiator Saeb Erekat reached their peak, places him in the position of referee in the latest boxing match between the different sides, free of immediate interests in the outcome — given that he is not a member of the coalition of the Netanyahu government.

Text of the interview follows:

Al-Monitor:  So whom should we believe — the Israelis or the Palestinians?

Hasson:  We have here two leaders, neither of whom wanted an agreement and not even a document, but the Americans dragged them there. The thing is, they did not manage to extricate themselves cleverly from that corner. I keep saying that the conflict between us and the Palestinians is irrational, because if it had been rational, after 20 years we would have found the solution. Therefore, we have to find a different way, and what they’re doing now is like trying to fix computer software with a monkey wrench.

The common denominator between [Palestinian President] Mahmoud Abbas and [Prime Minister Benjamin Netanyahu] Bibi is that both wanted to gain time. There’s a whole set of tactical political considerations, and there’s no desire to reach an agreement. This is a reality which cannot bring about a solution. Two leaders who don’t even have one direct or indirect line of communications, cannot promote anything. It’s an insane situation. Netanyahu knows what he has to do, but his heart won’t let him, he’s not even close.

Al-Monitor:  Isn’t it the need for political survival that prevents him from doing what he should?

Hasson:  In Netanyahu’s case, the heart and his father’s ideology don’t let him do what he understands must be done. I said it two weeks ago when I addressed the Knesset in a debate initiated by the opposition on the government’s failings after a year in power. I had three minutes, so I turned to the prime minister and told him that in 1995, Prime Minister Yitzhak Rabin, who wanted to advance the arrangement with the Palestinians in the West Bank, came to me and to the head of the army’s Southern Command, Ilan Biran, and asked us to prepare a plan for him.

We went back to him and said that in 2015 there will be 6 million non-Jews and 6 million Jews on both sides of the Jordan River, and there are four options: transfer, apartheid, a binational state or diplomatic separation. I said to Bibi: You have to choose among those four options, but the difference is that 2015 is here, it’s no longer on its way, and I ask that you get to that year knowing already where you want to go, how to get there and with whom. In the end, I said to him: Mr. Prime Minister, I have three minutes to speak, two have gone by, and I am giving up the last one and giving it to you so that you can talk about the future, not just the past about which you always talk.

Al-Monitor:  And where did Netanyahu go wrong? What could he have done with a right-wing government? It sounds like you tend to blame him for the situation.

Hasson:  The thing is that Netanyahu doesn’t understand the implications of his conduct on the other side. He acts out of political motivations. For example, now that Hamas is at a low point, he stops the fourth release of [Palestinian] prisoners, and as far as he’s concerned, it’s justified — but it’s not wise diplomatically. Because what’s happening on the ground? Hamas says, “There’s no point believing him,” and Mahmoud Abbas finds himself trapped because Bibi proves that he cannot be trusted.

In general, the decision to free prisoners and not to freeze [settlement] construction had a damaging potential, to begin with. There’s full consensus about the release of prisoners in every Palestinian home; since 1948 there isn’t one family that hasn’t been touched by this issue — a son, a father, a brother, a neighbor. And now that the release has been canceled, it has a strong effect on the street. In addition, demanding the Palestinians to recognize us as a Jewish state, as a condition, shows that we do not understand the problem. It gives the conflict a religious character, instead of a diplomatic one. So Netanyahu, without intending to, has instilled life into the religious aspect of the conflict. That’s how we got ourselves into a situation where Mahmoud Abbas says: “If it’s religious, it’s pan-Muslim,” and he goes to the Arab League, which adopts a decision that pertains to the religious aspect of the conflict.

Al-Monitor:  And what is Mahmoud Abbas' part in this?

Hasson:  Mahmoud Abbas doesn’t really have a political home, and he’s scared that the Arab Spring will enter his home after failure of the negotiations. That’s why it was important for him, too, to gain time.

I look back at the past eight years under Mahmoud Abbas, and what stands out is that the Palestinian Authority doesn’t believe in violence and doesn’t encourage it, and directs the conflict into other avenues. Mahmoud Abbas lacks the power and the cruelty that [Palestinian Chairman Yasser] Arafat had to withstand a strong, violent conflict. In my view, he’s more of a salon ideologist.

I estimate that if the current negotiations blow up, within six months the Arab Spring will get to the West Bank, too. There will be demonstrations by those who support popular democracy, there will be protests and marches by thousands and more. They will want to replace the government and to overthrow Mahmoud Abbas, and will get sweeping international support. This will present us with a problem, as well. Because when the marches on [West Bank settlement] Elon Moreh begin, and the IDF [Israel Defense Forces] starts dispersing and shooting, we will enter a different ballgame.

Al-Monitor:  But from a political point of view, it seems more comfortable for Netanyahu. His right-wing government will once more be stable and not under any threat because there are no negotiations, and even Justice Minister Tzipi Livni and Finance Minister Yair Lapid can stay in the coalition and blame the other side.

Hasson:  The way I see it, the biggest mistake right now is to examine the situation from a political perspective. Who is going to care 10 years from now what [HaBayit HaYehudi Chairman Naftali] Bennett said? It won’t even be a footnote. In general, I sometimes look at the leadership and I don’t believe it’s real.

A while ago, one of the central figures in the Palestinian Authority told me: “You’re nuts. I just heard that Bennett said on the radio that if Mahmoud Abbas wants to meet with him, he will go into a room with him and after signing him up for his HaBayit HaYehudi party, he’ll say to him: ‘Now make me some coffee.’” I was stunned. I went to check and sure enough, I found that there was a radio interview (in a spoof-like interview for the feast of Purim, Bennett was asked what would happen if he were to enter a closed room with Mahmoud Abbas for three hours. He answered that he would sign him up as a member of the HaBayit HaYehudi party, and “afterward I’d ask him to make us all a small coffee.”)

There’s a lack of understanding of how such remarks are perceived by the other side. It’s terribly damaging to the relationship. How can one build a relationship of trust this way? Or with the remarks made by the defense minister? The Palestinians also don’t forget all the things that Liberman said about Mahmoud Abbas. No one here thinks how the other side interprets things; what is the meaning of a Jewish state for them?

Al-Monitor:  You keep going back to the Rabin assassination, to the demise of the Oslo Accord and to the Israeli leadership crisis. What has changed since then on the Palestinian side?

Hasson:  They started out with an agreement that would have left Gaza, Judea and Samaria united, then moved to an agreement in which Gaza was separated from Judea and Samaria, and it will continue with their having to make do with cantons rather than a state. Because the process of erosion for both sides is inevitable, and very soon there will be a million Jews in Judea and Samaria.