Did Bibi choose to preserve Hamas to avoid talks with Abbas?

In an exclusive interview with Al-Monitor, Knesset member Israel Hasson, a former deputy head of Shin Bet, charges that Prime Minister Netanyahu has chosen to preserve Hamas as part of a strategy to keep Palestinian President Mahmoud Abbas weak and unable to negotiate. 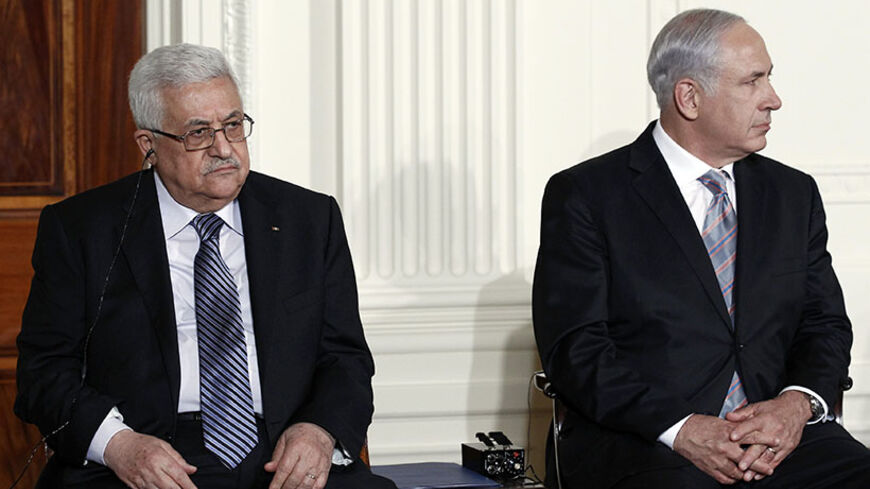 Kadima Party Knesset member Israel Hasson, former deputy head of Shin Bet, has grown increasingly frustrated over the past few days watching Prime Minister Benjamin Netanyahu and Defense Minister Moshe Ya'alon manage the prolonged Operation Protective Edge. Hasson has reached the conclusion that what guides the two men is the desire to avoid strengthening the status of Mahmoud Abbas, president of the Palestinian Authority, to evade returning to the negotiating table with him. That, according to Hasson, is why they did not attack Hamas in a manner sufficiently devastating to ultimately destroy the organization.

Hasson has experienced two intifadas. He has also witnessed every diplomatic process since the days of the Oslo negotiations. Over the past few years, he has come out against the delegitimization of Abbas conducted by Netanyahu and Foreign Minister Avigdor Liberman. He says that the campaign of insults and humiliation was intended to make Abbas irrelevant to any negotiations with Israel. In Hasson’s opinion, Operation Protective Edge furthers this approach. In an interview with Al-Monitor, he claimed that concern over hitting Hamas too hard was the main consideration behind Netanyahu and Ya'alon’s decision not to expand the ground campaign after the destruction of Hamas' tunnel system.

Al-Monitor:  What caused you to reach that disturbing conclusion?

Hasson:  The starting point in this claim is that Hamas and the Palestinian Authority are like connected vessels, and it is impossible to separate them as part of the solution. Facing this, there are three approaches in Israeli politics on the conflict with the Palestinians: the faith-based approach of [Economy and Trade Minister Naftali] Bennett and his friends; the second approach, of the defense minister and maybe also the prime minister, is that the conflict with the Palestinians must be managed [instead of striving to resolve it]; and the third approach is that we must devise a solution to the conflict.

When I take a closer look at what is happening now, I can only conclude that the diplomatic approach that determined the manner and pace of our operational activity during Operation Protective Edge was the one that says that this conflict has no solution and must be managed instead, so we cannot push anything to the edge. In other words, we mustn’t push Hamas too far into a corner and improve Mahmoud Abbas’ standing, because if he gets stronger, we will eventually have to pay him back in diplomatic currency, a currency that we are not willing to lay out.

Al-Monitor:  How is that played out in the field?

Hasson:  I’m very sorry to say this — it actually hurts me to admit it — but I can’t think of any other explanation for the way the IDF [Israel Defense Forces] has acted in keeping with orders from the political echelon. I would like someone to please explain why the IDF didn’t continue advancing another half a kilometer [0.3 miles] into Gaza after finishing up with the tunnels, so as to force Hamas to start folding up its flags. All of that was possible, but someone didn’t want to make Hamas any weaker than it already is, because that same someone only wanted to strike at it in a limited way. This was meant to avoid a situation in which Hamas would be weakened in a way that would strengthen Abbas, turning him into the address for finding a solution. We stopped intentionally when we did.

Al-Monitor:  Is that “someone” the prime minister and the defense minister?

Hasson:  That’s what it looks like. After all, there’s a right-wing quintet in the cabinet: Bibi [Netanyahu], Bogie [Ya’alon], Bennett, Liberman and Communication and Home Front Minister Gilad Erdan. Who’s the counterbalance to them? Finance Minister Yair Lapid and Justice Minister Tzipi Livni? Indeed, if Bibi and Bogie wanted it, there wouldn’t have been a problem finding a majority. What we should have done was a measured ground assault, advancing 100 to 200 meters every day, without plowing up Gaza like [Defense Minister Ariel] Sharon did in Beirut. The IDF could have implemented that kind of operation.

That is why the more I think about it, stopping the way we did makes absolutely no sense to me. There can only be one possible explanation for it: They didn’t want to strengthen Abbas and be forced to start diplomatic negotiations with him, or in other words, to pay with Judea and Samaria as the currency. Looking at who the members of the Israeli delegation in Cairo are only reinforces this conclusion. There are people there who have no ability to make a decision.

Al-Monitor:  How do you think Hamas interprets the way that Israel is acting?

Hasson:  Hamas thinks the following: The Arab states won’t come to our rescue, because they’re against us right now. All we have is Qatar and Turkey. On the other hand, our savior could come from the Western countries, from the United States and Europe, because they are sensitive to what is happening in Gaza. If this is the situation, then why should we give Egypt this achievement? Why should we submit to Egypt if we can continue expanding the rift between Israel and the West?

That is exactly what happens the more time passes. After all, what is Hamas doing? They are coming to the negotiations with legitimate demands on a civilian level, like lifting the siege. These demands are aimed directly at the West, because as we have just said, they are demands to improve the situation of the suffering population in Gaza. Hamas does not want to hand over this achievement to Egypt, so they are in no hurry to submit to the demands. They have time, as far as they are concerned. They have as long as the West is willing to listen to them.

The second thing that Hamas says is that it doesn’t want to be the government in the Gaza Strip anymore. It wants to be the ruler, using Hezbollah in Lebanon as its particular model. It prefers to have Abbas bear responsibility toward the people, because Hamas wants to wear Abbas out in the long and Sisyphean task of rebuilding Gaza. Hamas is not giving up its struggle, and it is not giving up its goal of representing the entire Palestinian people. It may have to give up a few things now, but as far as it is concerned, that is just for tactical reasons.

Al-Monitor:  And what is Abbas’ position?

Hasson:  In my opinion, Abbas is justified in asking, who will be going into this diplomatic process with me? The West, after they just kicked me in the head? Bibi, who wore me down and weakened me and wouldn’t even give me the chance to take credit for reducing pressure in [the West Bank]?

Israel is now saying that it has a common cause with Egypt. In my opinion, they seem to be forgetting that Egypt is not part of the Zionist enterprise, and when push comes to shove, its commitment is to the Palestinians. That is why it is important to internalize that this common interest between Israel and Egypt has very clear, delineated boundaries. That should be the working assumption of this government.

Al-Monitor:  The cease-fire just fell apart, and Israelis are in their shelters again. Are we back at square one?

Hasson:  To a large degree, the situation is even more problematic now than it was at the beginning, since we no longer have the international breathing room that we once had. That window of opportunity is already shut, which means that we will have to act quickly and pay a steeper price. I don’t see us having any other choice but to go in if we want to change the equation that was created here.

We should have gone to the negotiations from the position of our enormous power. We should have continued putting pressure on Hamas on the ground and advanced a little farther. That way, we would have made it clear to Hamas that it had miscalculated, that we can continue advancing into Gaza and putting pressure on it. We should have done that as soon as we finished dealing with the tunnels, but somebody stopped it. In my estimation, we won’t have a choice, and we will have to start again from this very point. We will have to go in for a limited ground operation. Otherwise, I really don’t see how we can get out of this loop.