In an interview with Al-Monitor, Israeli Defense Minister Moshe Ya'alon argued that the Gaza war last summer prevented a Hamas takeover of the West Bank: "Mahmoud Abbas does not control Gaza, he barely controls Jenin." 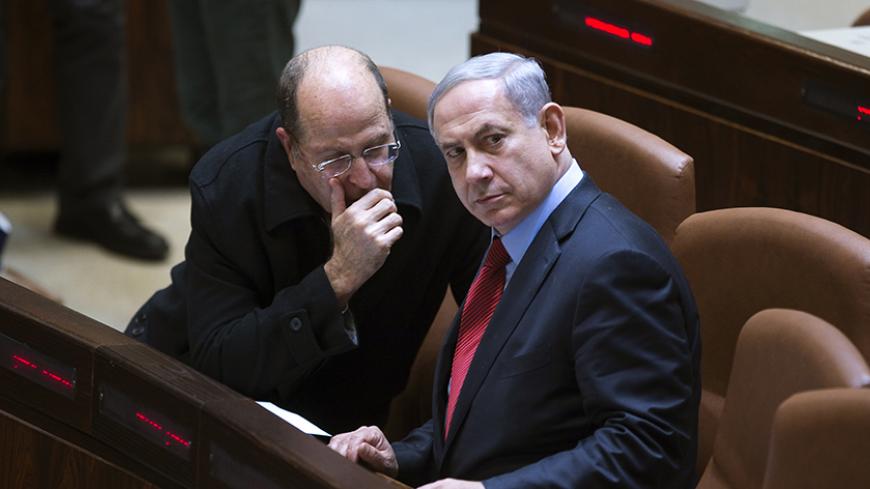 “Had we succumbed to the belligerent calls to bring down Hamas, we would still be tangled up in Gaza today. Hamas has been deterred for now.” Defense Minister Moshe Ya’alon said that in an interview with Al-Monitor, half a year after the controversial conclusion of Operation Protective Edge on Aug. 26. His comments intimated a critique of his security Cabinet colleagues, Foreign Minister Avigdor Liberman and Economy and Trade Minister Naftali Bennett, both of whom advocated at the time an extensive ground operation and the conquest of the Gaza Strip. According to reports, Bennett is now eyeing the position of defense minister after the March 17 elections.

In the interview, Ya’alon discloses that none of the tunnels coming out of Gaza ended beneath an Israeli community, despite the pervasive feeling among the public. He comes out against the claim that there is a link between the Palestinian-Israeli conflict and international terrorism, and contends that if Labor Party Chairman Isaac Herzog, Hatnua Party leader Tzipi Livni and Yesh Atid Party leader Yair Lapid are running the country right now, “We’d have had a 'Hamastan' in the West Bank for a long time.” According to him, all they care about is applause.

Al-Monitor:  Half a year has gone by since Operation Protective Edge. How long do you think it will be before the next round of fighting?

Ya’alon:  The military operation ended with Hamas accepting our terms for a cease-fire, i.e., with no seaport and no airport. Had we succumbed to the belligerent calls to bring down Hamas, the fighting would have continued until now. We would have become entangled. The ground operation against the tunnels was enough. I hope the quiet lasts for a long time. What currently exists between Hamas and us is a balance of deterrence. If it was up to Hamas, they’d be firing at us every day. I can’t say how long it will be until the next round. It depends on how strong they become. Right now, they are having a hard time smuggling weapons into Gaza, and I can say that deterrent against Hamas exists, but it should be evaluated over the long term.

It will take them a long time to rebuild Gaza and be able to engage in military terrorism again. I hope they learned their lesson, because the blow that Hamas incurred is unlike anything that ever happened to them in the past. Some 30,000 buildings collapsed. Don’t people understand what that means?

Hamas was armed with 10,000 rockets, and now they have just one-fifth of that. It should be made clear that we didn’t find a single tunnel that reached an Israeli community, and not a single citizen was harmed as a result of any attack through the tunnels. I am not belittling the scope of the threat. We continue to invest forces and technology in countering it, even today.

Al-Monitor:  Yair Lapid and Tzipi Livni were part of the government at the time, but they are now speaking out against the way that Operation Protective Edge was managed.

Ya’alon:  Let me be clear about this. If they and Herzog would have been here leading the country for the past six years, we would have a Hamastan in Judea and Samaria — I am very familiar with that approach. They don’t want to fight and concede. The main thing [as far as they are concerned] is that they [the world] applaud us. We were applauded after the disengagement [2005]. How much did that help us until we got hit with the Goldstone Report? Who is living with the threat now? It’s temporary. We have to look at our own interests. If there was a Hamastan in the West Bank, [Palestinian President] Mahmoud Abbas would never survive it. His government would collapse. I may have paid a price for my positions on the issue of Judea and Samaria, but if the prime minister and I had been insistent, we would have a Hamastan there by now. Over the course of the peace process, I was described as a hard nut to crack, but the fact is that the security interests of the State of Israel take precedence over everything else.

Al-Monitor:  Is there a link between terrorism in Paris and Hamas terrorism?

Ya’alon:  There is a connection. From a historical perspective, we are in the middle of a clash of civilizations. It is a war between radical Islam, and I say upfront that this does not encompass all of Islam, and the Western culture. The concept isn’t new to Islam. The starting point of the Khomeini [Islamic] Revolution was in Iran in 1979. That was when the current wave began. It is no coincidence that we witnessed the rise of al-Qaeda in the 1980s, nor is it any coincidence that the rise of Hamas here is part of the rise of the Muslim Brotherhood. The basis of Hamas is Islamist. In a nationalist context, that is translated into a struggle against the Zionist entity.

Al-Monitor:  What’s the right way to fight that?

Ya’alon:  The first thing is not to succumb to it. Efforts to make some kind of distorted connection, claiming that it may stem from the Palestinian-Israeli conflict are ridiculous, because what is happening in Iran did not begin with this conflict. We have no common border with them, but they still call for Israel to be erased from the map. What is happening inside Iraq or Syria has nothing to do with the [Palestinian-Israeli] conflict. Challenging the US, which they consider to be the “Great Satan,” certainly has nothing to do with it, either.

Al-Monitor:  Did Europe ignore the terrorism emerging from within?

Ya’alon:  That much is obvious. It can be attributed to the Western approach of a sated society and the rejection of the problem so as to avoid conflict — even if this means paying some small price, one way or the other. What we are seeing now is what was already written on the wall. These attacks didn’t start today. Sept. 11 was a wake-up call for the international intelligence communities in the West to cooperate.

Al-Monitor:  What do you anticipate happening with the diplomatic process? Why insist on a Palestinian declaration that the State of Israel is the nation-state of the Jewish people?

Ya’alon:  That is an excellent question. If it is so simple, and the state already exists, then why not say so. I have reached the conclusion that this must be demanded assertively. The Palestinian leadership, whether it was Yasser Arafat in the past, or Mahmoud Abbas today, are unwilling to recognize our rights as a state.

Children in the Palestinian Authority are taught that Acre and Jaffa are Palestinian, not Israeli, ports. Factually, all the territory transferred to their control became a launching pad for terrorists. They are deemed suspect in that. In Oslo, [the late] Prime Minister Yitzhak Rabin demanded the same thing from Arafat through an amendment of the Palestinian Covenant, but the covenant has yet to be changed. It is a matter of principle for them.

Ya’alon:  For the past six years, we, the Likud Party under [Prime Minister Benjamin] Netanyahu’s leadership, have been saying clearly that we do not want to rule over them, and it is good that we separated from them politically. They chose to split into two political entities: The first, in the Gaza Strip, can be called Hamastan, and the second is the Palestinian Authority in Judea and Samaria. I would like to see them living in economic comfort and security, in a governable structure. I want them as a responsible neighbor. I can live with that. All I want is for them not to bother me. Mahmoud Abbas has no control over Gaza. He barely controls [the West Bank city of] Jenin. Over the past six years we have reached out to him several times, but our reached-out hands remained hanging in the air.

Abbas has been evasive time after time. We froze construction [in the settlements] in the previous term, but he didn’t come. We entered into a nine-month diplomatic process with preconditions that included the release of prisoners in pulses, but in the end, all he is prepared to discuss is borders. And why? Because with that, he just receives. We do all the giving. Let’s talk about the framework. Will you be willing, at the end of the diplomatic process, to recognize the Jewish people’s right to a state: yes or no? Until now, the answer has been no.

Al-Monitor:  What did Tzipi Livni see that you did not?

Ya’alon:  Ask her why Abbas is always OK, and we are always at fault. Some people think that there is no choice, and that time is working against us. Is that how negotiations are conducted? Time works to the advantage of whoever knows how to use it. Zionism knew how to take advantage of time even before the state was founded.

We are being threatened with a diplomatic tsunami, but that is an exaggeration. What kind of isolation are they talking about? We have excellent security relationships with various countries in Europe, Asia, and other places, which are interested in having relations with us. There are groups within us that are constantly trying to push for concessions, such as “Yitzhar [outpost] for Bushahr [Iranian nuclear plant].” The way we carry on internally and the debate we are having among ourselves create the misconception. I hope that the Western world is not mistaken about this. We are in the same boat.

It is obvious that the Israeli left is not helping. One thing that has become accepted around the world is that there is no peace because of the settlements. I ask, if there is a desire for peace and coexistence, why must people be uprooted from their homes and transferred? I do not deny the rights of Arabs to live anywhere in the State of Israel, so why are there areas, which are off-limits to Jews? Why is that acceptable? When Abbas says that he wants to receive territories clean of Jews — that is ethnic cleansing. It is even racist.

Al-Monitor:  Some people say that you also contributed to the worsening of our relationship with the United States.

Ya’alon:  They have been exaggerating quite a bit. Tendentious things have been said. There is an excellent relationship on security matters, including on a personal level between the departing Secretary of Defense Chuck Hagel and me. We speak by phone and have long meetings. That does not mean that there were no disagreements. We have arguments, but we never forget that our relationship comes above all else.