Israeli minister: After Abbas, there will be no more Palestinian Authority

Talking to Al-Monitor, Israeli Minister of Jerusalem Affairs and Immigrant Absorption Zeev Elkin predicts that once Palestinian President Mahmoud Abbas steps down, the Palestinian Authority will disintegrate, lamenting that Israel has no plan to face this likelihood. 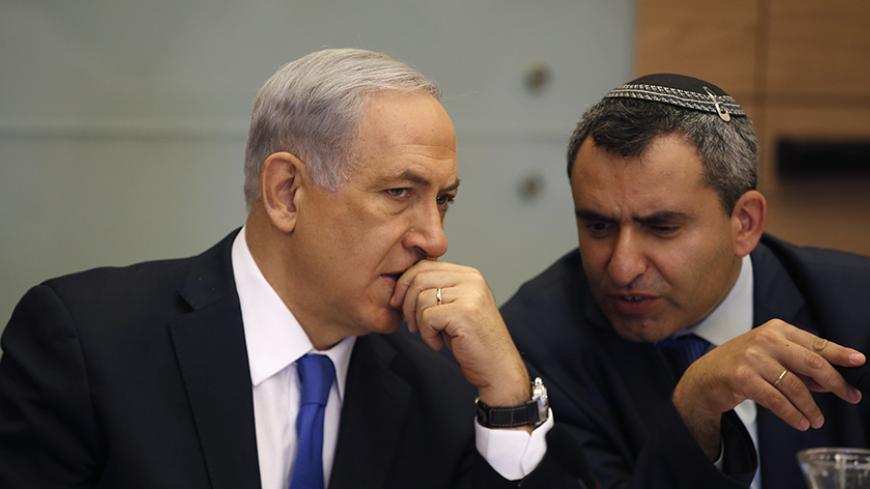 Zeev Elkin, Israel's minister of Jerusalem affairs and immigrant absorption, began his political career in late Prime Minister Ariel Sharon’s party before deserting Kadima for the Likud in 2008. He is currently a member of the diplomatic-security Cabinet and one of the most incisive thinkers of the Likud and the entire Israeli political system. Elkin is a close associate of Prime Minister Benjamin Netanyahu and viewed as one of Netanyahu’s most faithful and effective political operators, though tension has recently been detected between the two. Elkin also enjoys good contacts with Yisrael Beitenu leader Avigdor Liberman, the Israeli right's most uncompromising opposition to the current government.

Elkin was born in Ukraine, where he earned a bachelor’s degree in mathematics from Kharkiv University and then immigrated to Israel in 1990. He earned a master’s degree in Jewish history from the Hebrew University in Jerusalem. As a skilled Israeli politician, Elkin is affiliated with the ideological right, but he is also equipped with an open mind. Elkin holds diverse and sometimes surprising views, but unlike many others he does not hesitate to express his opinions. In an interview with Al-Monitor, Elkin prophesized, “It will not be long until the Palestinian Authority is no longer.”

Al-Monitor:  Minister Elkin, what do you mean by "not that long," and why are you so sure that the Palestinian Authority will disappear?

Elkin:  It could happen in a month or in a year. And I am not referring to the option that President Mahmoud Abbas will retire; enough has already been said about that. I think that the Palestinian Authority will simply cease to exist.

Al-Monitor:  How did you reach that conclusion?

Elkin:  [Palestine Liberation Organization leader] Yasser Arafat had Abbas, but Abbas does not have an Abbas No. 2. He did not groom a successor, and in my opinion no one can fill his shoes. There is no one we can point to as a sure-fire successor or even a leading candidate for the job. What we are looking at is a personal as well as a social-historical process. We are seeing the total destruction of the Arab world’s hierarchical structure. It began with the phenomenon nicknamed the Arab Spring throughout the Middle East; now it is reaching the Palestinians. For the time being, they are turning their energies against us. That is to be expected. But if they didn't have Israel, they would be working against Abbas.

Al-Monitor:  If they are acting against us and not Abbas, then why do you think the Palestinian Authority will disappear?

Elkin:  Because Abbas is 82 years old. He is not so young and not so healthy, and his popularity is in the dumps. It's clear that he is nearing the end of his political career for one reason or another. He can't put the blame on anyone else for that, because he was the one who started saying he’s reached the end of the road and thought out loud about retiring. After all his threats about retiring, he created a buzz on the subject and now people expect it to take place at some point. The problem is that he will leave a vacuum, which will breed chaos. If he had a clear, obvious successor, it would be a different story altogether. But there is no one.

Al-Monitor:  So what will the day-after-Abbas scenario look like, in your opinion?

Elkin:  Unfortunately, it will look bad. There are many destructive forces that will circulate on the ground with very harsh ramifications in the short term. Securitywise it will be very challenging, mainly with regard to the Jewish settlers in Judea and Samaria. Unfortunately we are ignoring this possibility, not preparing for it, unwilling to accept the reality and refusing to read the writing on the wall. We aren’t internalizing it; we just keep hoping that what we want to happen will come to pass. But life isn’t always like that.

Al-Monitor:  Nevertheless, something has to happen after Abbas is gone. What will the territory look like then?

Elkin:  I reckon that there will be a form of anarchy and power struggles between different gangs. Local militias will form. This can go on for a long time, but meanwhile, governability will weaken greatly and the central government will crumble. That will be very dangerous.

Al-Monitor:  Do you think there’s a chance that Hamas will seize control over the West Bank, as it did in Gaza?

Elkin:  Yes. But that’s one thing that Israel can’t accept. We won’t allow a Hamastan to rise in Judea and Samaria under any circumstances.

Al-Monitor:  Is this scenario certain, in your opinion?

Elkin:  Nothing is certain in the Middle East, but I feel that the odds are very low that the Palestinian Authority, as we know it today, will survive over time. Its demise can take place in another year; it can also happen later on, but ultimately it will come to pass. This will have many repercussions, and Israel must begin to prepare for them.

Al-Monitor:  What turns you into such a pessimist on this specific issue?

Elkin:  We tend to believe that what was true in the past will hold true in the future. It is the human inclination to view ongoing situations as eternal, and then at the end we are caught by surprise. I am a "graduate" of the dismantling of the Soviet Union, and I was traumatized by that. At the time, it also seemed to us that the "Soviet Empire" was something stable and perpetual, but then it became clear to us that it was brittle, fragile and fleeting. The condition of the Palestinian Authority is far worse than that of the Soviet Union on the eve of its collapse.

Al-Monitor:  Earlier, you talked about security-related challenges. What did you mean by that?

Elkin:  Our entire discourse on the subject of terror must change. This structure that we’ve become accustomed to — of the organized security apparatus in the Palestinian Authority, of one law system and one set of weapons — all this can go up in smoke. I compare the situation to a pressure cooker filled with water that reaches the boiling point. We try to deal with the scalding water that boils over by placing a cover over the pot, but that won’t help. Instead, we need to turn down or extinguish the fire. That is a simple law of physics.

Al-Monitor:  How can that be done?

Elkin:  Regrettably, it can’t be done now. We are looking at a regional phenomenon that is crushing the entire Middle East and is not skipping over us. We cannot turn the clock back and make Abbas 30 years younger, and we cannot invent a successor to our liking. It doesn’t work that way. Almost all the regimes in the Arab world are feeling the frustration and fury of their citizens, mainly the youths. In the Palestinian Authority, parts of this frustration and fury are directed at Israel, and from this point of view we are an asset for Abbas and we are saving him. But as I said before, this won’t go on for long. Ultimately, he will also pay the price.

Al-Monitor:  So what should we do now?

Elkin:  We should be making preparations. Sadly, we and the Americans are currently working with the idea that it will survive forever, and we are focusing our efforts on resuscitating a dying body. We have to change our tactics and internalize the fact that an era is coming to an end. We have to ask ourselves: How will we live and function on the day after, in the new period? I admit that there’s a chance it won’t happen, but the odds are very high. We need to have a plan, and at the moment we don’t have any at all.