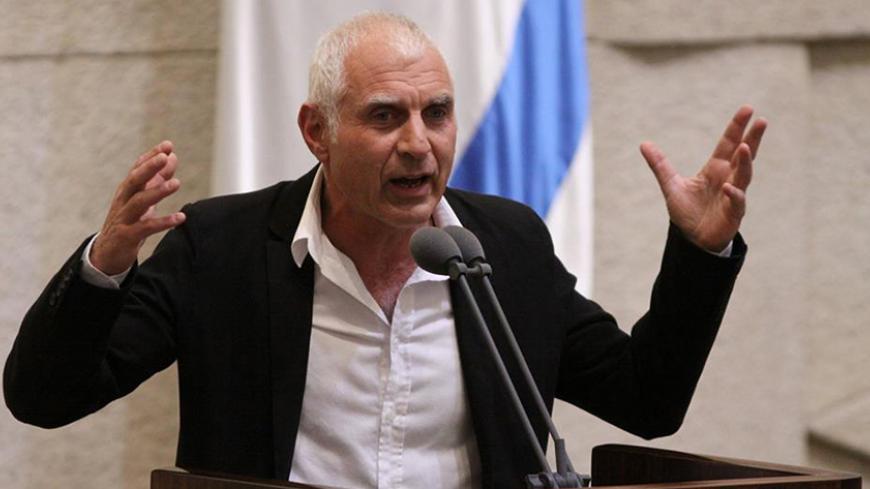 “I looked Schabas right in the eyes throughout my entire testimony, and he kept trying to get me to look somewhere else. I felt as if he was embarrassed. At one point he looked like he was in utter shock. It was when I started to cry while talking about my wounded son and about my friends, who were killed. He didn’t ask me a single question. When I finished my testimony, he just shook my hand and said, 'Thank you.'"

In an interview with Al-Monitor just a few days before the United Nations releases its report on Operation Protective Edge, Knesset member Haim Jelin of the Yesh Atid Party re-created his testimony to the UN’s Official Committee of Investigation. Professor William Schabas headed the committee, which began its work in July 2014. Some six months later, on Feb. 3, however, Schabas was forced to resign due to claims that he had ties to the Palestinian Authority. The committee is expected to release its findings June 22. Israel is already claiming that these findings will be one-sided and that they will portray Israel Defense Forces soldiers as war criminals.

Jelin, a member of Kibbutz Be’eri along the Gaza border, was head of the Eshkol Regional Council during Operation Protective Edge. At the time, he emerged as a prominent symbol of the determination shown by Israeli civilians in the summer of 2014. Apart from fulfilling his public duties, he was also forced to contend with the injuries suffered by his son, who was in combat in the Khan Yunis zone in southern Gaza Strip, and the death of Daniel Tregerman, 4, the son of close personal friends from Kibbutz Nahal Oz, in a mortar attack. Two more of his friends, Ze’ev Etzion and Shahar Melamed, from nearby Kibbutz Nirim, also died in mortar attacks. As someone who stood at the forefront of Israel’s information campaign during the 50 days of fighting, Jelin became a familiar figure in Israel and around the world.

He decided to fly to Geneva in January so that he could testify before the Committee of Investigation. The prime minister’s office opposed his trip, claiming that the committee’s conclusions had been written in advance. Convinced that Israel had abandoned the international public diplomacy arena for years, Jelin decided to go anyway. Since then, he was elected to the Knesset, where he is the voice of a very meticulous opposition to Prime Minister Benjamin Netanyahu’s diplomatic policies. He claims that Netanyahu failed to turn Operation Protective Edge into the impetus for a regional diplomatic initiative, a step he says would have reduced the extent of the delegitimization and boycott campaign now being waged against Israel.

Al-Monitor:  If what the government claims really happens and the report determines that Israel did, in fact, commit war crimes in Gaza, will you regret testifying before the committee?

Jelin:  I will have no regrets about testifying, even if the Schabas report concludes that we are war criminals. It’s not in my nature to admit that any battle is lost before it has even begun. Unfortunately, there is something about Israel’s fighting spirit that has been lost, and the same can be said of its fight on the public diplomacy front. Fighting to show that our cause is just has nothing to do with the left or the right. We simply have to act. First we lose 7-0, then we lose 5-0 and then we win. It is important that the report should contain at least a page or two of what we had to say. If, God forbid, there is another Committee of Investigation, we’ll already have four pages.

In my opinion, the entire situation that Israel currently faces has a lot to do with Netanyahu’s lack of clarity when it comes to policy. If he wants a two-state solution, then go right ahead and lead us there. If he would rather have a binational state, then lead us to that instead. The problem is that he is stuck in the same place he was when he first came to office.

Al-Monitor:  There are those who will argue that this approach actually weakens the Israeli position and the country’s public diplomacy campaign at a time when the country is facing delegitimization and the United Nations is about to accuse Israel of war crimes.

Jelin:  For years, we didn’t know how to go about explaining terrorism to anyone. No one walks around with photos of al-Qaeda [atrocities]. It is our job to explain to the world that terrorism affects all aspects of life for everyone. It affects the economy, and it affects international development. We have the possibility to lead this public diplomacy campaign because we are the primary victims of terrorism. Instead, we just sit in our corner, afraid that if we explain our position, they will eventually force us to give up part of Judea and Samaria. In other words, everything is connected to everything else. That doesn’t contradict what I said in my testimony. It actually reinforces it.

In my testimony, I stated that I did not raise my son to kill anyone. I raised him the same way that so many other soldiers who fought in Operation Protective Edge were raised — to defend the country’s civilian population. They were not raised to kill. Actually, he and his friends were ready to sacrifice their lives for the sake of security. When he was wounded and brought to the hospital, he said to me, “Dad, I cleared out the tunnel that reached our home.” There is nothing more tangible and real than what he said to me while he was lying wounded in the hospital. I have no doubt that our army is moral.

Al-Monitor:  Did you feel like there was any readiness to listen to what you had to say?

Jelin:  We went [to Geneva, to testify] even though the prime minister’s office didn’t want us flying there to give testimony. They claimed that the report had been written in advance and that they would just use us. I responded that I am not willing to accept that defeatist attitude.

I had the feeling that they wanted to hear us. Our testimony was scheduled to begin at 9 a.m. and finish up at 4 that afternoon, but the committee members gave up their lunch break for us, and we finished our testimony at 6:30 [p.m.]. That’s rare.

I was stunned by how ignorant they were about some very basic issues; but on the other hand, I was pleasantly surprised by their desire to understand and to listen. For example, they thought that the kibbutzim on the front lines, which were fired on by Hamas, were actually army bases. We had to explain to them what a local “on-call alert squad” is [a group of local residents who were trained to respond if and when a terrorist attack takes place] and what a “settlement-wide emergency team” is [local volunteers trained to intervene in an emergency situation]. We explained things about the first intifada and about how the Karni Crossing is named after an Israeli businessman [Yosef Karni], who believed in peace, employed Palestinians and was eventually murdered. We told them that the Palestinians had a port in the past — that they had everything — but that they chose terrorism instead.

Al-Monitor:  Did the committee show any empathy toward you?

Jelin:  Throughout my testimony, I felt as if I was giving it my all. Did we have an impact? We’ll know on Monday [when the report is published]. It was just a few months after Operation Protective Edge, and I couldn’t keep anything in. I had spent 50 days at war with the responsibility for all the settlements surrounding Gaza on my shoulders. I didn’t have patience for anyone, and when I gave my testimony, it all came out, including the tears. I told them the whole story about how my son was wounded. I told them about little Daniel [Tregerman] who was killed and about how his parents were friends of mine, and I told them about my friends Ze’ev Etzion and Shahar Melamed, who were also killed. Once I started talking, the tears began to flow. I remember how they brought me plenty of tissues. I had the feeling that this was the first time we were actually doing something. This time we’re not abandoning the [public diplomacy] arena, even though it has been neglected for years.

Al-Monitor:  You had quite a few private conversations with the prime minister. Doesn't he understand all of that?

Jelin:  It’s true. Most of those conversations — and there were conversations with the defense minister [Moshe Ya'alon] as well — took place during Operation Protective Edge. I found both very convincing when they said that we have to do everything to prevent a war from breaking out and to avoid sending soldiers into battle. I was very excited to hear that. In the end, however, they said that under no circumstances would they agree to negotiations [with Hamas] and that they wanted to see Hamas weakened. One year later, we can see what the consequences of that are.

The only things that really change in the Middle East are the actors. The dynamic remains the same. We didn’t want to talk to [late PLO leader Yasser] Arafat and the PLO, but we ended up talking to them anyway. We didn’t want to talk to Hamas, and now they are being threatened by the Islamic State [IS] and jihadists in ways that are, frankly, inconceivable. Everyone realizes that Hamas will lose power, but that is in no one’s interest because whoever comes in to take their place will come clutching a knife and wearing an orange shirt [reference to IS].

Even after the operation, I was convinced that Bibi [Netanyahu] was serious. Even some of the ministers were convinced that he was about to make a switch. But I’ve been hearing that for the past six or seven years from ministers who no longer serve in the government, and Netanyahu continues to do his own thing. There is no question that he is an absolute genius when it comes to waging the public diplomacy campaign and when it comes to political survival. On the other hand, I am not so sure that he is a genius when it comes to the diplomatic game of chess. He demands things from everyone and blames everyone else, as if we bear no responsibility whatsoever.

There are 1.85 million Palestinians living in the Gaza Strip, and half of them are unemployed. It’s a ticking time bomb. Anyone who fails to understand that will end up coming under even more rocket fire. And those rockets won’t only be aimed at Tel Aviv either. Kiryat Shmona [in the far north] will also be hit by rockets from the Gaza Strip.

After Operation Protective Edge, we should have been part of a diplomatic initiative involving all those countries that have the same common enemy: radical Islam and [IS]. Hamas is afraid of losing power, which stands in sharp contrast to the State of Israel. The more fear there is, the worse the overall situation is, the better the chances of Netanyahu keeping his seat. From a big picture perspective, there’s a conflict of interests here.

Netanyahu thinks that he would have to pay a very steep price in Judea and Samaria, and he isn’t willing to pay it. He is well aware of everything I am saying. He just doesn’t want to do anything about it.