In an interview with Al-Monitor, Labor Knesset member Binyamin Ben-Eliezer calls for labeling some violent settler groups as terrorists. 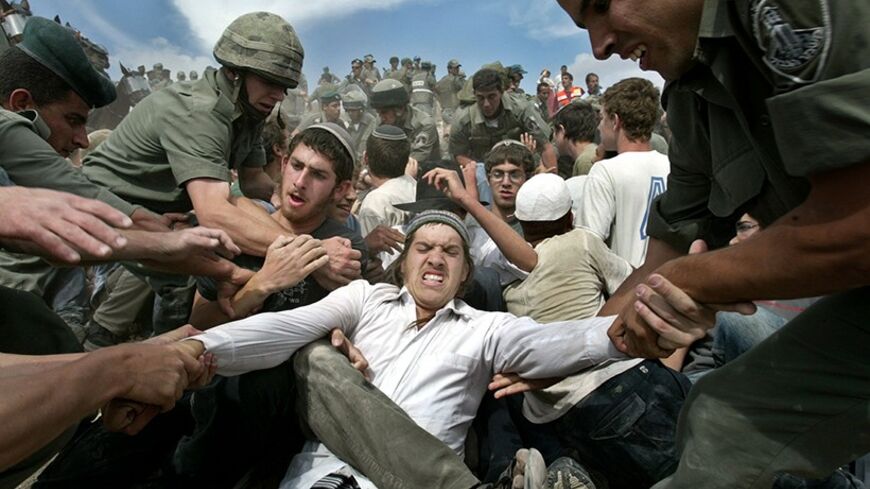 Jewish settlers scuffle with Israeli border police attempting to remove the Jewish outpost of Mitzpeh Yitzhar in the West Bank, May 17, 2004. - REUTERS

“I have been following these guys for months, the settlers from Yitzhar, and at a certain point I thought they could hurt Bibi [Prime Minister Benjamin Netanyahu], too, if he makes a crucial decision. After all, they’re godless.” So says presidential candidate and Knesset member Binyamin Ben-Eliezer in an interview with Al-Monitor, in reaction to the growing violence and hate crimes in recent days on the part of settlers and right-wing extremists.

The Jewish violence in Arab communities, dubbed “price tag” by the right wing, as well as the equanimity with which a resident of the settlement of Yitzhar said she had no problem with killing an Israeli soldier, take Ben-Eliezer back to the month prior to the 1995 Prime Minister Yitzhak Rabin assassination, when he understood that right-wing incitement was spiraling out of control and tried to warn that someone would pay with their life. Ben-Eliezer, formerly minister of defense and chairman of the Labor Party, claims Israeli society is in a true state of emergency. He says determined action can still stop the snowball but believes that someone in the Israeli leadership has stalled dealing with this phenomenon.

Al-Monitor:  Are events now reminiscent of the atmosphere prior to the Rabin assassination?

Ben-Eliezer:  It’s exactly the same. One month before the assassination there was the big demonstration in Jerusalem’s Zion Square, at which all the heads of the Likud Party spoke. By chance I happened on the back end of the demonstration, near the Knesset. Suddenly, I found myself surrounded by thousands, the subject of cursing and swearing. A young man, who later turned out to be the brother of [Rabin assassin] Yigal Amir, climbed onto my car. The amount of cursing and swearing to which I was subjected was unbelievable and at the lowest levels, including spitting in my face. Luckily for me the police were called and they extricated me in quite a state. I was very agitated. I got to the Knesset and ran straight for Bibi, who was then chairman of the opposition. I told him: “Listen closely, we’re going to have a murder here.” [Former Likud Minister] Dan Meridor was standing next to him. Bibi sent him to check what was going on. He came back and said there was nothing going on outside.

The following day, at the Cabinet meeting, I asked to speak and said that I had almost been murdered. I remember saying over and over: “Friends, there will be a murder here” — that’s how I truly felt — until Prime Minister Rabin shushed me. As we were walking out of the meeting, he came up to me, gave me a hug, which was unusual for him, and said: “What are you talking about? It cannot be.” A month later he was murdered.

Al-Monitor:  Does the Yitzhar group remind you of Yigal Amir’s gang?

Ben-Eliezer:  Certainly. The Rabin assassination was also the culmination of a process that began with ideas. Look what’s happening: There’s an exchange of ideas in Yitzhar, and a young woman says it’s legitimate to murder a soldier. As far as I’m concerned, that means such a thing is possible, otherwise no one would have brought it up. Every deed starts out as an idea. These guys are criminals, first and foremost against their fellow settlers. Dozens of people burn things, dirty and damage cars, act wildly, thus bringing about similar behavior on the part of Palestinians. And who gets hurt in the long run? Just regular settlers. The revenge is exacted on innocent people. These guys go around with [religious] skullcaps, but they have no god. And that was exactly the deal with Yigal Amir. He was a young man without a god. That’s why it’s only a matter of time before they murder a soldier. If the government doesn’t shape up and the leadership doesn’t take a stand and stop it — it will happen. 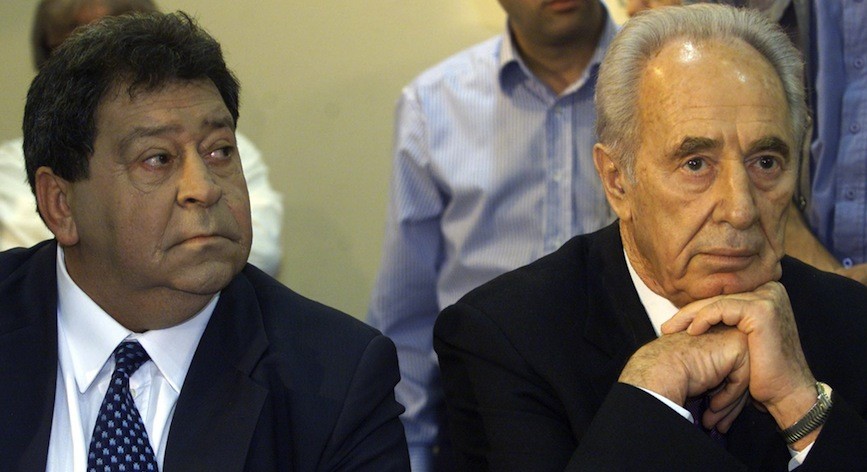 Al-Monitor:  You were the Israel Defense Forces (IDF) commander of the Judea and Samaria region, coordinator of activities in the territories and minister of defense. What should be done?

Ben-Eliezer:  If the state decides to get a handle on this thing, this phenomenon can be wiped out in a matter of days, and I say this as someone who’s been there. At the time I served as commander of Judea and Samaria, Rabbi Meir Kahane stirred agitation in the region. He would show up some place, stir up riots against Arabs and run away. He would endanger the lives of Jews, because after the mess he made, the other side would wake up.

One day I summoned him and handed him an order curtailing his movement and a map on which were marked the places he was allowed to move: one route from [the settlement of] Kiryat Arba to Jerusalem. It took him exactly 48 hours to violate the decree, to get arrested, to stand trial in a military court in Ramallah and to be put in jail. Interestingly, this was under a Likud government, headed by [late Prime Minister Menachem] Begin. In those years we arrested the heads of the Jewish underground.

Once you know who these people are, and in this case it is known, arrest warrants can be issued and the phenomenon eradicated within days. It’s not complicated. This is the only bright spot; the army and the security services can easily handle it.

Al-Monitor:  So did we not learn anything from the Rabin assassination? How do you explain the feeble response to this phenomenon?

Ben-Eliezer:  The problem begins with the fact that there is no determined government that responds clearly in the face of these phenomena. First of all, they have to be defined as a terror organization, because that’s what they are, first and foremost. There’s no getting around it. They’re a terror organization and as a result of their activity, Jews are being murdered. As far as the definition of a terror organization goes, there shouldn’t be any distinction between Arabs and Jews. But the government is taking its time in taking control of this situation. This gang is becoming dangerous and it’s impossible to even understand the extent of the danger they pose. Another element that adds fuel to the fire is the public atmosphere that justifies these acts, because the public here is convinced that [Palestinian President] Mahmoud Abbas is recalcitrant and doesn’t want an agreement.

I’m not the only one who says these guys should be labeled a terror organization. Members of Bibi’s government, like [Justice Minister] Tzipi Livni and [Internal Security Minister] Yitzhak Aharonovitch, are demanding the same thing. The reason is simple: The minute they’re defined as a terror organization, they can be handled differently.

Al-Monitor:  Do you think Netanyahu is stalling?

Ben-Eliezer:  The leader is tested at such moments. The minute he makes a crucial decision, then there’s no political consideration any more on his part. Three heads of government were in the same spot: Begin, who closed the door on his inner convictions when he decided to give back the Sinai; Rabin, who was eventually killed off by a Jew; and [late Prime Minister Ariel] Arik Sharon, who went on his way when he understood that he had no political backing. [Sharon left the Likud to carry out the Gaza withdrawal plan.]

Al-Monitor:  Is the breakdown of the diplomatic process connected to this?

Ben-Eliezer:  The fact that there is no diplomatic process only helps these guys. We see phenomena such as “David the Nahlawi,” which reflect the fact that our soldiers, who are supposed to ensure our existence and protect our security, are sent into an impossible reality at the heart of a civilian population, and after that they’re put on trial for it, too. Unfortunately, the radical right wing has a large majority in the government, with Habayit HaYehudi Party and the right wing of the Likud. Such phenomena thrive in such an atmosphere. In general, the atmosphere in the country is one of intolerance and violence.

Al-Monitor:  Are you saying this also because of the way in which the presidential elections are being conducted? It looks like a battlefield. Just in the past few days you were accused of gambling.

Ben-Eliezer:  That, too. It’s all linked. I don’t remember a period like this one, when on the one hand, there is such diplomatic gloom and total despair, and on the other, the nation is dragged to the right and there is such totally wild behavior by elements who feel like there’s no law in the land.

In running for the presidency, I have been experiencing unpleasantness. There has never been such a phenomenon in which someone spends millions of shekels to prevent someone else from getting elected. I don’t understand it. It’s spun out of control. I’m not obsessed with the job, I’m quiet and calm. But I do fear for my children and grandchildren. What kind of a state are we living in?

Al-Monitor:  Do you expect the prime minister to intervene and calm things down?

Ben-Eliezer:  Without meaning to he’s actually lending a hand to this continued bloodletting. When word comes out that he wants to cancel the institution of the presidency, it doesn’t help any, of course.