Shimon Sheves, a close associate of late Prime Minister Yitzhak Rabin, tells Al-Monitor that incitement, hatred and lack of rule of law in Israel nowadays are even worse than in the days before the assassination of Rabin. 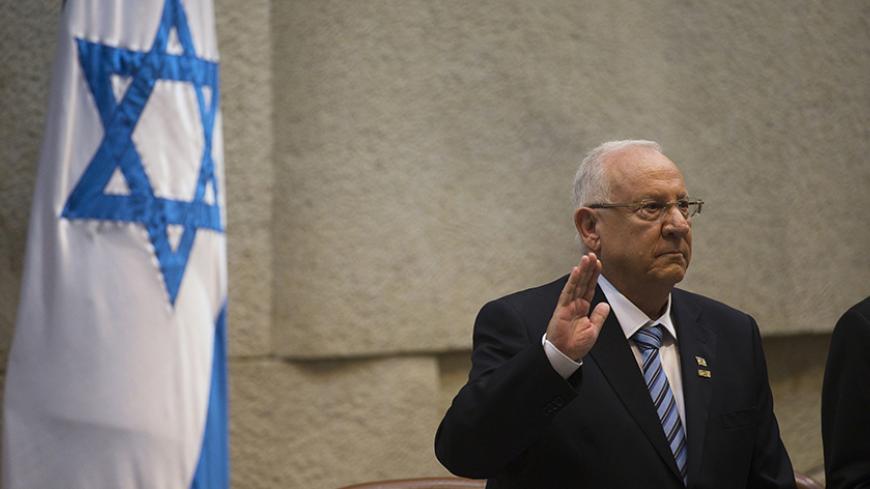 Incoming Israeli President Reuven Rivlin completes his oath of office during a ceremony at the Knesset, Israel's parliament, in Jerusalem, July 24, 2014. - REUTERS/Ronen Zvulun

“President Reuven [Rivlin], you are an honest man, perhaps the last senior official to speak truthfully and aim for justice. I am proud of you my big brother for your courage and steadfastness … Do me a favor and tell your associates to keep you out of harm’s way. I failed.” This statement was posted on Aug. 3 by Shimon Sheves, the man who stood by the late Prime Minister Yitzhak Rabin throughout most of his tumultuous political career until his assassination in November 1995. What prompted Sheves to express concern on his Facebook page were the life threats made against Rivlin by extreme right-wing activists, who “dressed” him up, as they did Rabin back in those days, in Waffen SS uniforms, adding the caption “Traitor.”

Sheves told Al-Monitor that the level of hatred, violence, incitement and lawlessness in Israel today eclipses the atmosphere during the dark days that led to Rabin’s assassination.

The conversation with Sheves is not an easy one. The man is angry; he is hurting, he is in despair and he is pessimistic. What Sheves is seeing are the same sights that ended in the assassination of a prime minister. On the other hand, he sees that the security, political and legal authorities are doing nothing, as he said, to stop the incitement — a deja vu of the events of 1995.

“There are people in Israel who are just as benighted and as dangerous as Hamas, Islamic Jihad and the Islamic State,” he told Al-Monitor. “There isn’t a big difference between the madmen who decapitate people in Iraq and Kurdistan and “ours” who burn babies alive [referring to the murder of the Palestinian toddler on July 31]. That’s why President Rivlin is in danger.”

In this interview, Sheves, who served as Rabin’s aide when he was defense minister and then as the director general of the prime minister’s office when Rabin was elected premier, depicts what he perceives to be the unraveling of democracy.

Al-Monitor:  What sparked this unraveling process back then?

Sheves:  The Archimedean point was the leniency exemplified toward the members of the Jewish Underground in the 1980s that killed three Palestinian students, tried to assassinate Palestinian mayors and wanted to blow up the Temple Mount and the buses of Palestinian workers. Not only were the detainees of the Jewish Underground not charged with treason, but there was also an outrageous leniency that was followed by a pardon. As a result, dozens of people who were partners to undermining the Israeli rule in Judea and Samaria were set free. The state gave them a green light and showed that it was lily-livered in front of those people. Those people — the stray weeds so to speak — established bizarre communities with people who joined the national ultra-Orthodox stream and turned the social-democratic Jewish settlement into a bunch of messianic people who will have nothing to do with the laws of the state. They live by other creeds. They are neither our brethren nor our cousins. The Jewish Underground was labeled “bad apples,” or "stray weeds." The same was said about Rabin’s murderer. And now they also call those who burned a baby alive [in the village of Douma] bad apples. But we’re talking about thousands of people who do not recognize the state’s laws and get support from rabbis who incite them. Now they also get support from certain politicians. That’s an exact deja vu of the days leading up to Rabin’s murder.

Sheves:  Look, when the ultra-Orthodox Shas Party walked out on Rabin’s government [in 1993] and as soon as its leader, Aryeh Deri, started his legal proceedings [Deri was indicted and imprisoned for involvement in a corruption scandal], what remained was a small government that some segments of the Israeli public deemed illegitimate. Messianism started growing wings and taking off. Politicians took part in incitement rallies to curry favor with delusional right-wingers. Democracy stopped functioning and eventually someone fired the shots. Yigal Amir, Rabin’s assassin, was not the only one responsible for [Rabin's] murder. Back then the state’s institutions — the police, the attorney general’s office, the Shin Bet and the courts were very weak and sluggish in their response. Freedom of expression became the cause celebre in the public discourse rather than reacting to violence and the fear spread by various factors through the streets of Jerusalem and Tel Aviv. There were ministers who told Rabin, “You will be murdered.” This was said in the presence of senior officials from the defense establishment and the judiciary. The same thing is happening today, namely the feelings of illegitimacy that those people harbor against the authorities on the one hand, and the incompetence of the authorities on the other. I have to admit that I’m also partially responsible for relying on people who should have provided solutions and should have protected the prime minister, but they didn’t. Rabin was murdered right beside me. It’s not easy to walk around with this for 20 years, and now it feels like coming full circle — a deja vu. Similar threats are being made against the president, and the security and legal establishments are terribly incompetent.

Al-Monitor:  But isn't today's situation different? There’s now a right-wing government in power and even Rivlin himself was considered, prior to his election, as the settlement movement’s own flesh and blood.

Sheves:  Netanyahu is a political coward pandering to the ministers from HaBayit HaYehudi, Naftali Bennett and Uri Ariel, and to those who want to bulldoze the Supreme Court [referring to Knesset member Moti Yogev who reportedly called for the destruction of the Supreme Court building following the upholding of the demolition of illegally constructed houses in the Beit El settlement]. I worked for the government when Yitzhak Shamir [Likud] was prime minister and foreign minister. We had different opinions, but he had integrity. He was a responsible and dedicated person. He was an ardent Zionist who was determined to uphold the rule of law. If Prime Ministers Menachem Begin and Shamir had been alive today and said what they said back then about upholding the law, they would have been just as threatened by those who are now threatening Rivlin and others. And then Prime Minister Netanyahu comes along, giving them [the settlers] a reward for the illegal construction — 300 housing units in Beit El in return for two houses that were illegally built [and then demolished by court order]. Why? Because he’s afraid of them.

Al-Monitor:  Do you think that the right wing has a powerful clout in all of Israel’s decision-making junctures?

Sheves:  People like [head of the Jewish settlement movement Amana] Ze’ev “Zambish” Hever, [former HaBayit HaYehudi Knesset member and executive director of Beit El Yeshiva Center Institutions] Ya’akov “Katzale” Katz and Uri Ariel worked vis-a-vis this bunch of cowards in Israeli politics who said “yes” [to settlements], even when they shouldn’t have. They even handed out money. When Uri Ariel served as director of the Jewish settlement movement Amana, and I was the defense minister’s assistant [in the late 1980s], he said to me, “We will conquer you because we are much more resolved.” And they did. And they really do want to conquer all the senior positions in the military, the defense establishment and other state institutions, and they want to set their own rules.

Al-Monitor:  The statement you’re remembered for most is the one you made a few minutes after Rabin’s murder: “There goes my country.” Do you still feel that way?

Sheves:  Yes, and much worse. There are no people in the Israeli left and center who can carry the burden of fighting for the important principles on the basis of which Israel was established. The right holds a competition to see who is more extreme and deranged. Bibi Netanyahu just tags along, fanning the fire. Netanyahu is the biggest disaster to ever befall Israeli society. He destroys all the principles and actions of Zionism in the State of Israel from the school of Prime Ministers David Ben Gurion, Levi Eshkol, Yitzhak Rabin, Menachem Begin and Yitzhak Shamir. That’s why the situation is so serious.

Al-Monitor:  Do you occasionally talk to Rabin?

Sheves:  I talk to him a lot. Yesterday I sat down with his daughter, Dalia Rabin, and we talked to him metaphorically. What would he have said now and how would he have reacted? Rabin was a mensch [Yiddish for a decent man], the unadulterated embodiment of the State of Israel. He knew, for instance, how important the United States is to Israel’s security. If Rabin had known that Bibi went to Congress behind the back of a sitting president [Barack Obama] and spoke against him, I’m sure he would have been turning in his grave. ​