Some right-wing Israelis are happy about the recent terror attack on Tel Aviv because of its association with the Israeli left. 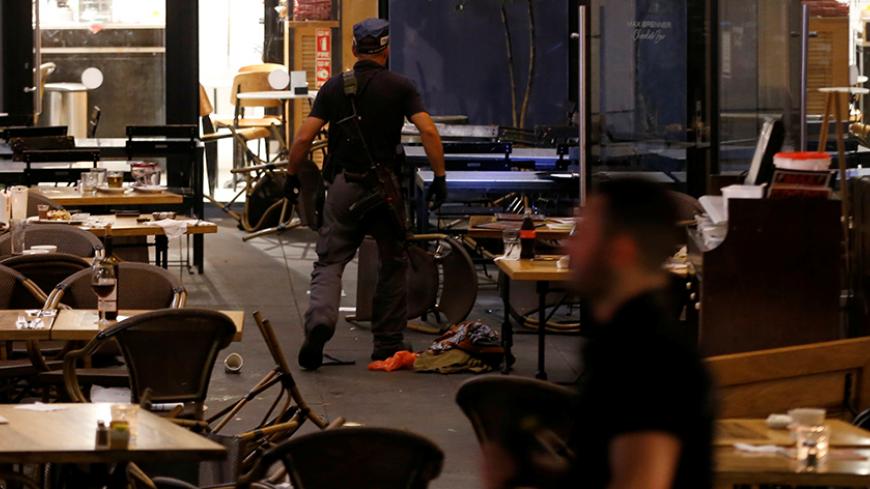 An Israeli policeman searches a restaurant following a shooting attack in the center of Tel Aviv, June 8, 2016. - REUTERS/Baz Ratner

Several hours after the June 8 terror attack that killed four people in Tel Aviv, and even before the city returned to business as usual, social networks began buzzing with posts and reactions by right-wing Israelis ecstatic that the very heart of Tel Aviv had been targeted in the murderous incident.

They didn’t seem to be a bunch of crazies letting off steam. Rather they appeared to reflect an array of people for whom Tel Aviv is the capital of the left-wing that supports a two-state solution and an end to the occupation, or, as they see it, the capital of the “Arab lovers.” As far as the right is concerned, it seems, the left is the worst enemy of the Jewish state.

A young woman named Emily Moghrabi, for example, wrote, “The important thing is that it happened in Tel Aviv. Such a pleasure.” After her incitement got lots of shares, Facebook removed the post, but not to be deterred, she then posted (since removed as well), “One of those killed in the attack was a Peace Now activist [referring to Michael Feige]. Stop. I can’t stand this happiness … Elor Azarya [the soldier who shot dead an injured Palestinian attacker in Hebron on March 24], this is for you.” That post got 130 shares.

Moghrabi is by no means alone, as evidenced by the dozens of supportive comments and praise for her posts, some of which dubbed her a “queen.” A guy by the name of David Benayoun wrote, “Being a leftist is being a German,” and another named David Eliran said that leftists are “sick and ugly creatures; Hamas is welcome to kill all the leftists.” And so it went.

Zionist Camp Knesset member Merav Michaeli, stunned by the unbelievable wave of hatred by Israelis happy about the murder of other Israelis, posted a video in seeking to appeal to the reason of the revelers: “I refuse to believe that you [Emily Moghrabi] and Nick Vassat [who also “celebrated” the murder of the Israelis] really think that Israeli women and men deserve to be murdered in a terror attack, even if they are leftists.”

It would seem that many Israelis, among them Michaeli, refuse to understand that the point of no return was passed a long time ago. It is not a case of “stray weeds,” the sobriquet applied to those at the margins of society whose incitement led to the 1995 assassination of Prime Minister Yitzhak Rabin. This is a widespread phenomenon reflected in Israel's daily public discourse, including in newspapers on the right. It is reinforced and encouraged by right-wing politicians, including Prime Minister Benjamin Netanyahu, who has turned hatred of the left into a self-serving tool.

In October 1997, while I was diplomatic correspondent for Channel 1 TV, Netanyahu visited the Jerusalem synagogue of the kabbalist Rabbi Yitzhak Kaduri. Israel Radio reporter Haim Rivlin and I stood near the prayer podium and saw Netanyahu lean toward the rabbi and whisper something. No one heard what Netanyahu said, and it is highly doubtful that Kaduri, 99 at the time, could have heard anything either in the noisy room. Netanyahu's remark, however, was quite audible on a tape recording, which was overlaid on the footage shot by the television cameras: “Those on the left have forgotten what it means to be Jewish,” he had said.

It’s been almost 20 years, and the consequences continue to be suffered to this day. Netanyahu has consistently depicted the left as seeking to undermine the foundations of the state, and if the head honcho says it, why shouldn’t others? Netanyahu as prime minister signposted the way for many on the right, including politicians, rabbis, analysts and activists. As far as they are concerned, the left is an enemy to be vanquished, and indeed, they often use the terminology of battle and war to goad the left. They unabashedly describe the left as colluding with the enemies of the state to destroy it.

Right-wing activist Haim Shine is a senior analyst for the popular freebie newspaper Israel Hayom, owned by the American billionaire Sheldon Adelson, a close Netanyahu associate. On May 23, Shine penned an article headlined “The left cut itself off from society.” He states that the left “had better understand that the Jewish nation has been reinstated in Israel for eternity. Let them [the left] not waste their despair, they will need it for many years to come.”

Here’s another example: In the 2015 election campaign, the state-backed Council of Samaria Settlers aired a video clip comparing the Israeli left to traitors being led to the gallows. The clip is titled “The Eternal Jew,” like some 1940s Nazi propaganda film. In it, a European man is seen in his office reading a newspaper called “The Left,” as his secretary, who calls him “Herr Sturmer” (as in the Nazi weekly Der Sturmer), tells him there’s a Jew who wants to see him.

There are numerous such examples. In other words, the expressions of hatred for the left after the attack in Tel Aviv are not by way of being writing on the wall. They are a huge warning sign. A civil war seems to be underway in Israel, and the next political assassination is just a matter of time. Every political assassination has been preceded by incitement and demonization, turning a political opponent into a dangerous foe who must be stopped at all cost, even the cost of murder. That is how Rabin came to be assassinated — after being portrayed by the right as a traitor, a Nazi. His assassin, Yigal Amir, pulled the trigger of a gun loaded with the hateful remarks of rabbis and politicians. Then, too, no one believed a Jew would kill a Jew.