The incitement campaign against Israel's right-wing President Reuven Rivlin, who dared expressing sympathy to Gazans' suffering, has broken all records of hatred and verbal violence. 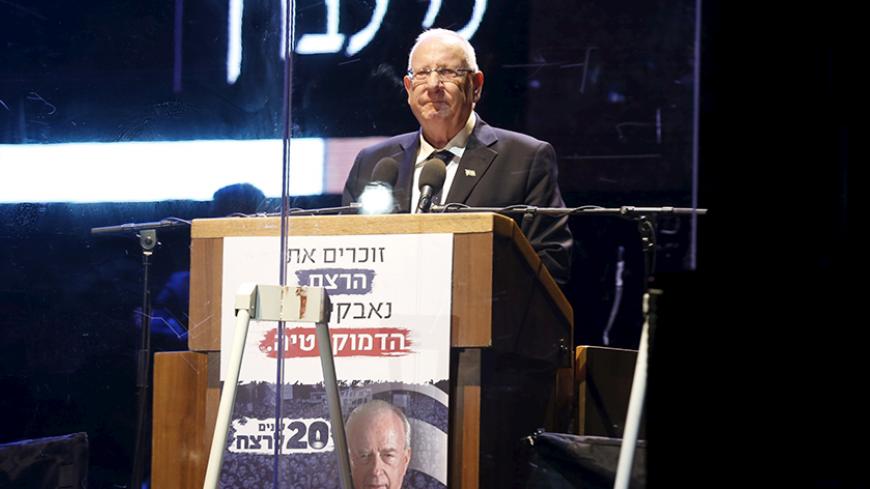 Israel's President Reuven Rivlin speaks on stage during the commemoration of the 20th anniversary of the assassination of late Prime Minister Yitzhak Rabin in Tel Aviv, Israel, Oct. 31, 2015. - REUTERS/Baz Ratner

The incitement comes across loud and clear this time too. But the writing on the wall is much larger now than it was prior to the assassination of Prime Minister Yitzhak Rabin in 1995. This time, nobody will be able to say, "We saw no evil, we heard no evil, we spoke no evil." Rabin refused to wear a bulletproof jacket because he found the idea of a Jew murdering another Jew unfathomable. However, our bitter lesson has taught us that a Jew can murder another Jew and a bulletproof vest will not cut it anymore. Israel is now standing at a juncture leading to a political, social and religious rift. Violent and sharp, it includes all of the country’s political streams. Yet, it is Prime Minister Benjamin Netanyahu who is largely to blame.

Netanyahu has set himself the goal to delegitimize Israel’s left-wing camp. It all began during his first term in office (1996-99). While visiting a synagogue in the Bukharim quarter in Jerusalem in 1999, he whispered in the ear of Rabbi Yitzhak Kaduri — one of Shas Party’s spiritual leaders — “The left has forgotten what it’s like to be a Jew.” This attitude has continued throughout his premierships.

Inspired by Netanyahu, the term “left” has become synonymous with treason, and its use has become widespread. Every human rights organization is stigmatized as a leftist organization. Every left-wing organization — defined as such — is immediately suspected by those who have been persuaded that “left” is a pejorative term as undercutting the state’s very own foundations. And we all know what the punishment for high treason is.

It is Netanyahu’s (commanding) spirit that lingers above. Those who have forgotten “what it means to be a Jew” are now being accused of not being flag-waving jingoists — of not being patriots. They are accused of forgetting what love of the homeland means. It doesn’t matter if they served in the military, sacrificed their lives, were wounded during service or lost a family member — left remains left no matter what.

Netanyahu was unable to even halfheartedly condemn the ongoing incitement campaign against President Reuven Rivlin. As Knesset member, Likud minister and right-winger through and through, Rivlin was the darling of the settlers, until overnight he became a traitor in their eyes. Before long, we might start hearing chants like “With blood and fire the president must be fired” (paraphrasing the slogan, "With blood and fire we will liberate Palestine"). For the time being, however, his detractors make do with the slogan “Rivlin isn’t my president.”

So what causes those inciters to foam at the mouth? They become livid at hearing wishy-washy political statements that in the past no one would ascribe to leftist or centrist positions. It should be recalled that the president, who by now has become an outcast, refused to shake hands with late PLO Chairman Yasser Arafat. He is also not the one who evicted settlers from their homes in Judea, Samaria and the Gaza Strip. All he did was to express sorrow and compassion for the suffering of Palestinians in Gaza — not for the armed militants, perish the thought. He did not express solidarity with Hamas nor with any other armed Palestinian organization. People forget that Rivlin was vehemently opposed to the 2005 disengagement from Gaza, and that he considered the Jewish settlement in Hebron to be a mainstay of core Jewish existence and of the settlement enterprise. Yet, the diatribes against the president illustrate how Israeli society has been stirred to the right. What was until a few years ago considered a centrist position is now overwhelmingly defined as a radical, dangerous and surreal left.

On Dec. 15, the organization Im Tirtzu released a video clip titled "Foreign Agents." It shows a terrorist mixing amid a crowd of Israelis when all of a sudden he pulls out a knife. Yet, just shy of stabbing his victims, the “defenders of terrorists” come to his rescue. Those defenders are Hagai El-Ad, chairman of B’Tselem; Avner Gvaryahu, director of public outreach at Breaking the Silence; Yishai Menuhin, the chairman of the Public Committee Against Torture; and Sigi Ben Ari, attorney at the Center for the Defense of the Individual (Hamoked). The graphics and fonts used in the clip to depict them are usually reserved for posters of most-wanted persons. There is only one way to interpret the epithet “Foreign Agents” that’s been attached to them — traitors.

Viewed by hundreds of thousands as soon as it was posted, "Foreign Agents" seeks to promote a draft bill sponsored by Knesset member Yoav Kisch (Likud). The bill aims to label organizations receiving money from foreign state entities as “agents” of the state that provides the financial support. Toward the end of the clip, a female narrator is heard saying in an authoritative and commanding voice, “While we are fighting terrorists, they are fighting us.” It’s them and us — them being “agents” or a “fifth column.”

On Dec. 16, the chairman of B’Tselem published a response in the daily Haaretz, perceived by right-wing activists as their archnemesis and a mouthpiece of traitors. “I’m afraid of the occupation, indifference to injustice, sanctimoniousness and passing shock. I wish I could rely on 1% of the sympathetic attention I’m receiving now on just another ordinary day in the territories, with nobody getting killed and no headlines,” he wrote.

On Dec. 16, Menuhin filed a complaint with the police, reportedly saying that Im Tirtzu has let his blood and that he is afraid of getting hurt.

In contrast, Ronen Shoval, one of Im Tirtzu’s co-founders, who left the organization and currently serves as chairman of the Academic Council for National Policy, told Al-Monitor that the incitement campaign against him in recent days and the death threats he has been receiving from members of the New Israel Fund and Peace Now have crossed the line.

The New Israel Fund’s Facebook page has replaced the face of the “stabbing terrorist” from Im Tirtzu’s "Foreign Agents" clip with Shoval’s face and a caption that reads, “Ronen Shoval, if blood is spilled here, it’s in your name.”

“I’ve received dozens of psychopathic abuses in the past two days,” Shoval said. “It all goes to show that the left is losing control. The left’s violent reactions are a reaction of an elite class that is losing its grip on power.”

Responding to a question whether both camps have not crossed the lines and whether a civil war has already begun, Shoval replied, “I can’t say that there’s a war. It’s very possible that a political assassination will take place. I don’t see Peace Now phalanges marauding Beit El [settlement] nor do I see phalanges from Beit El marauding left-wing centers. Yet a political assassination is certainly possible. But from this to a civil war — the distance is great.”

Is it? Fulminatory video clips, calls of treason, Nazi uniforms that have been pulled up again in a violent campaign, all go to show that the lesson of the last political assassination in Israel (Rabin) has not been learned. The war in Israel has already begun. There are still no fatalities on the ground, but soon there will be. ​