Why are Israelis turning a blind eye to settler violence?

The murders of a Palestinian toddler and a teenage girl have shaken Israelis from a willful blindness toward an already deteriorating situation that must be addressed to prevent a slide toward even more violence. 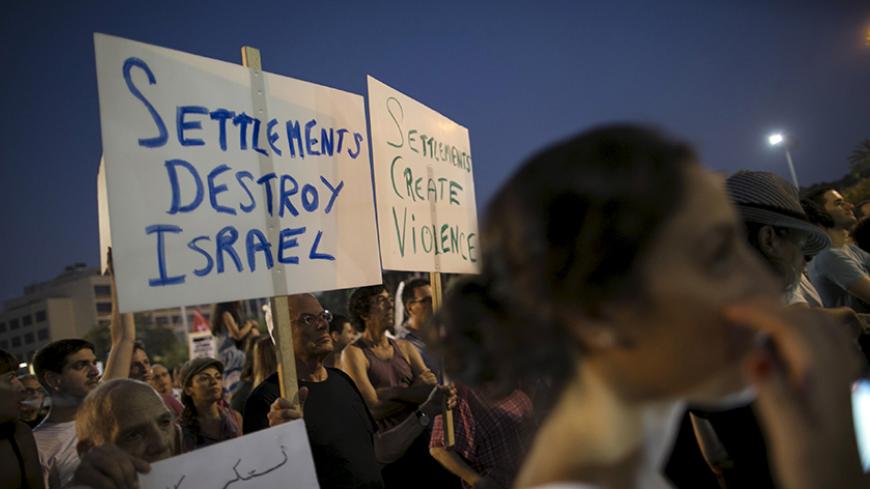 An entire country, or at least most of it, shuddered this week in the face of Jewish terrorism and the knowledge that there are people among us capable of burning a family alive in its home. “We’re not like that,” we tend to think. We claim the moral high ground, which is in contrast to the other side, whose incitement encourages the murder of civilians and the use of suicide bombers.

For years, however, we’ve been turning a blind eye to the uprooting of Palestinian olive trees and the perpetrators of the violent and vandalistic “price tag” attacks. We tell ourselves that these incidents are nothing more than graffiti sprayed on the walls of a house in an Arab village and that its perpetrators are just a bunch of bad apples, a small group of radical settlers gone wild who do as they please, representing no one but themselves. Thus, we refused to see that these bad apples have multiplied rampantly and that there is no one stopping their growth.

“Every society has its radical fringes. But today we need to ask ourselves: What is it in the public atmosphere that allows extremism and extremists to walk freely in broad daylight?” asked President Reuven Rivlin at an Aug. 1 protest rally in Jerusalem, following a July 30 stabbing attack by an ultra-Orthodox man at the Gay Pride parade in which a teenage girl was killed and the July 31 torching of the home of the Dawabsha family in Douma, an Arab village in the West Bank. Rivlin aptly described how, after years, we have woken up to a reality that Israelis had preferred to suppress while going about daily life, as if these phenomena were occurring on a different planet — one that had nothing to do with us.

What has led to the escalation and intensification of Jewish terrorism is not only that the Israeli public that does not reside in the territories had turned a blind eye to events. It was made possible by the ineptness of the Israeli law enforcement agencies in the territories as well as the patent and outright discrimination against Palestinians in favor of the settlers.

When settlers throw stones at an Israeli military jeep or assault senior officers, they usually go unpunished. You don’t need to have a far-fetched imagination to imagine what happens when Palestinian assailants perpetrate such an act. It was only recently, on July 3, that the commander of the Binyamin Brigade, Col. Yisrael Shomer, shot to death a Palestinian youth who had thrown stones at his vehicle.

How many video clips have been posted online showing settlers in possession of weapons and using them unlawfully? How many times have Israelis “shot the messenger,” accusing such human rights organizations as B’Tselem, Rabbis for Human Rights and Machsom Watch of treason, even though they were doing an honest job in depicting the current situation in the territories?

“We can’t say that our hands did not spill this blood. Anyone who’s ever sat at the Sabbath dinner table or been to a classroom or a community center and heard those racist jokes … the crass words, and did not rise to stop it, shares in the responsibility for spilling this blood,” roared Rabbi Benny Lau, head of the Harambam Jerusalem congregation at an Aug. 2 rally in Jerusalem. “In the name of which god does a man murder or do people burn alive a baby and his whole family?” the rabbi asked, pointing an accusatory finger at rabbis who sanctify the land more than they do the lives of people.

One of my Facebook friends posted a black photo with the caption, “And there was darkness” (Genesis 1:2). This darkness is reminiscent of the incitement campaign in 1995 that culminated in the assassination of Prime Minister Yitzhak Rabin. Now being demonized to burn at the stake is President Rivlin with a photoshopped picture showing him wearing a kaffiyeh and labeled by the bad apples “president of the Arabs.” Why? For condemning the murder of a baby who was burned alive and whose mother is fighting for her life with 90 percent of her body covered in burns?

Yet, in this darkness, which Israelis have come to notice very late, is a sliver of light. This weekend large numbers of people spontaneously gathered in squares in the big cities, chanting, “Enough is enough.” It seems that for a long time, Israel has not been as divided and as torn as it is now but also as united.

The demonstrators who took to the streets Aug. 1 were not only left-wingers, whom the right likes to call the “radical left.” The demonstrations in Jerusalem and Tel Aviv also included observant Jews who attended to protest sacrilege in the name of god and the Torah. The demonstrators were left-wingers, right-wingers and centrists, all realizing that Israel is on a slippery slope, and unless the deteriorating situation is addressed, it could herald the beginning of a civil war.

Anybody who can torch a Palestinian family in the middle of the night would not balk at killing “radical leftists” whom they deem traitors or collaborators with the enemy. We have already seen this horror movie, and we are all familiar with its ending — Rabin's assassination.

This is the moment of truth. This is the moment where not only the law enforcement agencies in the territories — the Israel Defense Forces, Israeli police and Shin Bet — need to take firm action against the outlaws. This is the time when the Israeli public, despite being weary and exhausted by the Palestinian conflict, needs to open its eyes and oppose the partition of the land into two separate entities — the Green Line entity, where law and order are upheld, and another entity, in the territories, where Israeli law is applied, if at all, only leniently to Jews while discriminating against Arabs.

In Judea and Samaria, there is one law for Jewish settlers and another — a much stricter one — for the Palestinian population. This discrepancy is well exploited by the radical right.

“I trust the police, and I trust the Shin Bet,” Israeli philosopher and ethics specialist Asa Kasher wrote on his Facebook page. “I don’t trust many others, first the circles close to yesterday’s zealot and last night’s terrorists … and then their friends in those close circles who did not stand in their way. The way I see it, they’re the ones who spilled that blood.”

In a few days, this storm, too, will subside. Life will go back to normal. Will anything really change? Will the uprooting of olive trees and price tag attacks be relegated to the back pages of the news? Will the Israeli public turn a blind eye and only wake up horrified again after the next terrorist act?

We should take note of the following: What happens in one entity — the area of Judea and Samaria — will clearly affect the other entity, which for years has been thinking that what goes on behind the fence is none of its business. The writing has been on the wall for a long time, but now it’s also spray-painted in big block letters.