Both Israeli and Palestinian extremists try to inflame a new cycle of confrontations: marginalized settler youth on one side, established Palestinian terror organizations on the other. 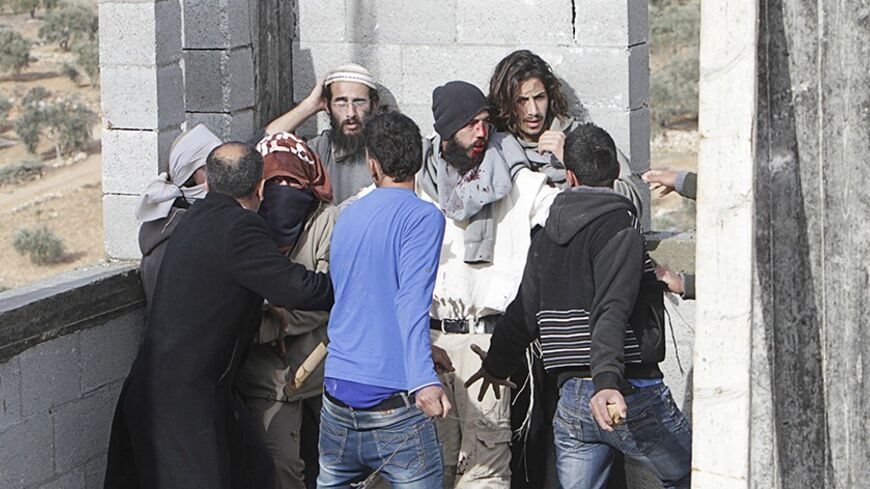 Two dichotomous forces are simultaneously in motion on the Israeli-Palestinian front. On the one hand is US Secretary of State John Kerry, who tirelessly shuttles between the parties, trying to milk the ram in a bid to draw up a framework agreement. On the other are madmen from both sides who are trying to set the ground ablaze.

What will come first — peace or a third intifada? In my opinion, the latter stands a better chance. To have peace, what is needed is an Israeli leader with the personal traits of the late French President Charles de Gaulle and the late South African President Nelson Mandela, and a Palestinian leader on the scale of Israel’s first prime minister, David Ben Gurion. They both have to make terribly difficult decisions from their standpoint, needing to overcome political complications, bad blood, a history rife with obstacles and a hostile environment. Regrettably, neither one of the incumbent leaders has the necessary qualities. However, you don’t need much for a third intifada to break out: a handful of madmen here, a raging mob there, a small spark at the right time to ignite the powder keg and boom! We have an intifada.

It nearly happened this week. A law-enforcement operation by the Israeli authorities on Jan. 7, which sought to uproot seedlings planted by Israeli settlers near the settlement of Shilo, unleashed the rage of the “hilltop youth” who decided to stage an act of protest. Some 16 activists got together and started marching from Esh Hakodesh outpost toward the Arab villages in the vicinity. According to one version, they entered the Palestinian village of Qusra to carry out a “price tag” operation.

It is in this village where things started to spiral out of control. From being the assailants, the settlers were the ones assaulted. Soon enough, they were surrounded by a raging Arab mob. Beaten up and pelted with large stones, they were humiliated and put into an isolated structure where they were kept inside. At the same time, hundreds of Arabs were seeking to lynch them. Some of the village dignitaries were able, albeit barely, to stop a massive massacre until the Israel Defense Forces (IDF) arrived at the scene, rescuing the settlers and putting the commotion to rest.

“Hilltop youth” is an epithet describing bands of young settlers, aged 18-35, who roam Judea and Samaria, posing an environmental risk to anyone who does not espouse their views — namely left-wingers, security forces and Arabs chiefly. It is believed that the “hilltop youth” is responsible for the “price tag” actions. The latter violent acts are usually perpetrated secretly, in the wee hours of the night by radical Jews whenever the government of Israel carries out a law-enforcement operation against the settlements, the outposts or the settlers across Judea and Samaria. This is how the extremists make it clear to the government of Israel and the IDF — the latter being the sovereign in Judea and Samaria — that whenever they try to demolish an illegal outpost or some unauthorized structure or to uproot a plantation on a land that does not belong to the settlers, and so on and so forth, a few vigilantes will go in the small hours of the night to some Palestinian village to torch cars or try to torch mosques. They will spray various “price tag” graffiti. Most recently, they’ve also been spraying “Regards to John Kerry.”

But let’s get things straight. Most of the violence in Judea and Samaria is perpetrated by Palestinian terrorists. They’re the ones hurling stones and firebombs. They’re the ones who in recent months have been carrying out terrorist attacks in the territories as well as in Israeli cities. Hamas and Islamic Jihad still have a significant hold on the ground and recently they’ve been trying to rear their heads in a bid to set the region ablaze so as to scuttle Kerry’s intentions and make it clear to Palestinian Authority Chairman Mahmoud Abbas (Abu Mazen) that he has no mandate to make concessions.

The Shin Bet and the IDF know how to handle these terrorists, whose number has been growing lately. There is no defense establishment in the world with greater expertise than the one developed in Israel to stamp out terrorism. Ever since the 2002 Operation Defensive Shield, in which Israel saw a decisive victory over a massive and horrible wave of terrorism, the terrorists have not been able to rear their heads and carry out significant terror attacks.

The problem is the lack of balance between the ability of the Israeli defense establishment to deal with natural, foreign-made terrorism and its limited capability of handling home-grown, Israeli terrorism.

In his usual manner, Israel’s Defense Minister Moshe “Bogie” Ya’alon this week described the events in Qusra as a terrorist incident for all intents and purposes, calling the hilltop youth and the perpetrators of “price tag” terrorists. The snag is that this is just a formalistic name. Israel’s General Security Services — the Shin Bet — are unauthorized to take the same actions that are taken against Palestinian terrorists, because the perpetrators are Israeli citizens. They cannot be placed under administrative arrest. Certain interrogation methods cannot be employed against them. The hands of the defense establishment are tied behind its back. That’s why the Shin Bet, whose capabilities have earned it world-wide reputation, is unable to infiltrate the ranks of the “hilltop youth.” Thus, Israel as a whole remains helpless in the face of this phenomenon.

As time goes by and the diplomatic negotiations make headway, tension on the ground is building up and with it the boldness of the “price tag” perpetrators. Considering their actions to be messianic, they operate by virtue of some divine decree and the authority of radical rabbis. They won’t be intimidated at seeing the area blow up and catch fire. In fact, that’s what they’re hoping for. From their standpoint, it would be wonderful to see the large flames and the rivers of blood. This would be the perfect chaos from which — so they believe — the Messiah will emerge and by which the Palestinians will be consumed.

Facing them are the mad Palestinians. If in the case of Israel we’re talking about the surreal margins that are denounced by Israel’s mainstream society and political establishment, on the Palestinian side, however, we’re talking about almost state-run, enshrined, armed and determined terrorist organizations. From their standpoint, setting the area ablaze is also a paramount decree. A third intifada would be a historic achievement. That’s precisely what they’re trying to do all the time. Yet as noted earlier, Israel’s Shin Bet knows how to cope with them. When it comes to Israel’s own madmen, it doesn’t.

In Shin Bet briefings, its officials can outline the modus operandi of the Jewish extremists as well as the scope of the phenomenon. The “hard core” is believed to consist of a few dozen, maybe a couple of hundred. These are the true madmen who can also blow up a large explosive in the center of the Al-Aqsa Mosque if they were only given the chance. They will never snap during an interrogation. They will not be duped by the activity of any agents provocateurs. They’re the ones responsible for this whole phenomenon. They’re surrounded by a few hundred to a few thousand collaborators, who also believe in the way but are willing to sacrifice much less. They can provide logistical infrastructure and peripheral assistance, yet they are not actively involved in these actions and are not privy to the secrets. They’re the ones who would be willing to give a ride to some other militants, hide them or provide them with an alibi. Surrounding these couple of thousand collaborators are tens of thousands “neutral” sympathizers; people who pray for the success of the extremists but are not involved in their activity.

The Shin Bet’s problem is that it cannot infiltrate those tight ranks. Just as the West after 9/11 encountered one black mass of Islamic terrorism and had no clue of how to infiltrate it, Israel faces a similar problem with its home-grown Jewish terrorism. We’re talking about hard-line ideologues who believe in a divine decree. Forming a close-knit society that has clear codes, they are also familiar with Shin Bet interrogation methods inside out, thus the chances of penetrating their ranks or of having Shin Bet agents infiltrate their ranks are very slim. And that’s exactly what the situation looks like. Jewish terrorism in Judea and Samaria has been going on for more than a decade and the Shin Bet has yet to show one significant success in thwarting it.

This is exactly how the third intifada will break out. A handful of madmen from one side will be lynched by the other side following a dispute or some “price tag” activity. The military will be late to arrive to the scene. People will be slaughtered, riots will break out, putting a lid on the events will cost many fatalities and the fireball will start rolling downhill and nobody will be able to stop it. That’s precisely how it started the last time. The writing is on the wall in red block letters. Everyone can read it, but nobody can erase it or knock down the wall.