Despite declarations by Prime Minister Benjamin Netanyahu about forcefully fighting price tag attacks, these acts of vandalism and violence against Muslim and Christian places of worship continue. 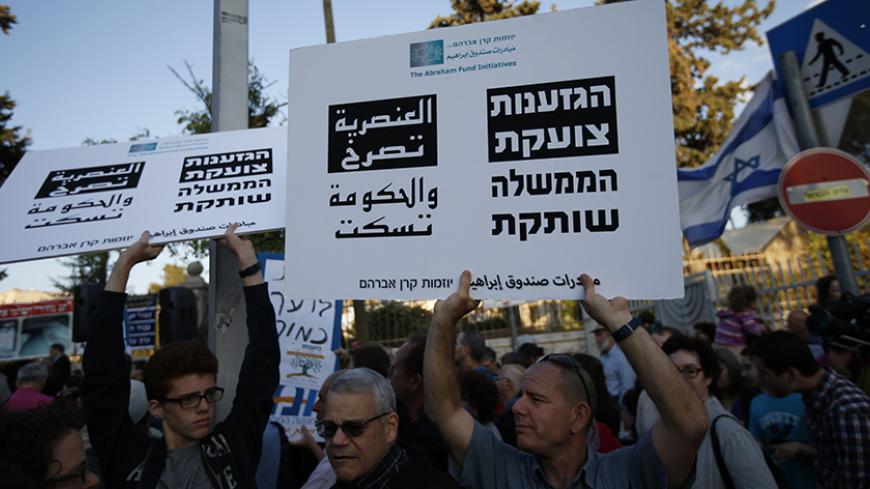 Christians, Muslims and Jews take part in a protest in Jerusalem, against attacks by suspected far-right Israelis, dubbed "price tagging," May 11, 2014. - REUTERS/Ronen Zvulun

Following a spate of “price tag” attacks against Arab communities and Muslim and Christian religious sites by radical right-wing groups, the foreign affairs and security Cabinet met in June 2013 to discuss ways of curbing this phenomenon. These acts consisted mostly of attacking Palestinian property, painting insulting graffiti on holy Christian and Muslim sites, setting fire to such buildings and committing other forms of vandalism, both in Israel and the West Bank.

In addition to the assault on freedom of worship and the damage to Israel’s image, these hate crimes greatly troubled various security agencies, especially due to their potential to spin out of control, escalate and result in a regional conflagration if the Temple Mount were attacked, for instance.

Participants at that 2013 Cabinet meeting discussed the demand made by then-Justice Minister Tzipi Livni, then-Minister of Internal Security Yitzhak Aharonovich and the head of the Shin Bet security service, Yoram Cohen, to designate “price tag” activists as members of a terrorist organization. A decision of that sort can be taken by the government only, according to the 1948 Prevention of Terrorism Ordinance. (Hezbollah, Islamic Jihad and the Kach movement are designated terror groups by the power of such a decision.) They argued that such a move would have a deterrent effect.

But Prime Minister Benjamin Netanyahu was reluctant to take such a dramatic step. Political pressure from the right, from the settlement leadership and HaBayit HaYehudi Party, among others, resulted in a much softer move: The defense minister was authorized to declare “price tag” activism “an unlawful association.” This enabled authorities to confiscate their property, real estate or bank accounts.

To limit the extent of criticism for his “capitulation” to the right, Netanyahu’s office explained at the time that the decision would provide the police and Shin Bet with the extensive intelligence collection tools, investigation and enforcement against anti-Palestinian “price tag” activities in the West Bank and attackers of Muslim and Christian institutions within Israel.

Exactly two years have gone by and hate crimes continue to generate tensions inside the Green Line and on its other side. The US State Department’s 2013 report on global terrorism, issued in April 2014, determined that Jewish terrorism was growing but Israel, in most cases, was not putting the perpetrators on trial. According to the report, five mosques were desecrated that year, as were three churches in Jerusalem and the West Bank.

Data published on June 19 by Israeli daily Haaretz, indicate that since 2011, 17 places of Muslim and Christian worship were set on fire in Israel. To date, not a single indictment has been handed down in any of the cases.

On June 18, Israel's new right-wing government was faced for the first time with a serious hate crime — an arson attack at the Roman Catholic Church of the Multiplication of the Loaves and Fish in Tabgha. Luckily, only two of the volunteers who were there at the time sustained minor injuries. The attackers sprayed malicious graffiti on the church walls and fled. This is not the first hate crime at this important church near Tiberias, where, according to Christian belief, Jesus fed throngs after loaves and fishes miraculously multiplied. In April 2014, unidentified vandals damaged a cross and benches in the church courtyard; they have not been caught to date.

When news broke of the church fire in the early morning hours, condemnations were issued by the right and the left. It took Netanyahu all day to issue a statement denouncing the attack. His office only put out a statement at about 5 p.m., saying the prime minister had spoken with Shin Bet Director Yoram Cohen and instructed him to conduct a speedy investigation of the church arson. Cohen may not have been too pleased with the way Netanyahu used him to prove how determined he is to deal with the hate crimes, especially given that Netanyahu was the one who two years ago overruled the proposal, supported by Cohen, to designate such acts as terrorism with all the serious implications involved.

Netanyahu is good with words and declarations, and to minimize the damage to Israel’s image throughout the Christian world, he stressed in his statement that the “outrageous” arson attack was “an attack on us all,” promising to bring those responsible for this “despicable act” to justice.

In examining Netanyahu’s determination to tackle hate crimes since he returned to the premier's seat in 2009, a grim picture emerges. Most of the perpetrators of “price tag” attacks are never caught. Netanyahu condemns, but that’s the extent of his activity.

Other than that, Netanyahu and his top ministers contribute to the climate of radicalization against Palestinians and the Israeli left, which was even compared during the last election campaign to the Islamic State. Pronouncements such as those made by Netanyahu on election day against Israel’s Arab citizens, warning that Israeli Arabs were "voting in droves," or those of ministers such as Culture Minister Miri Regev and Education Minister Naftali Bennett along with their populist moves, are fertile ground for the “price tag” phenomenon.

Meretz Party Chair Zehava Gal-On, who supported Livni’s 2013 initiative to designate “price tag” criminals as terror activists, told Al-Monitor that since then the situation has actually gotten worse. According to her, “marginal groups have moved front stage, encouraged by a climate of incitement and harsh rhetoric, and the most serious thing is that there’s no discernible enforcement activity against the incitement and the crimes against mosques and churches. The prime minister may have spoken with the head of the Shin Bet agency, but he is more concerned with calming the Christian world. There’s no real will to fight the phenomenon.”

Knesset member Yousef Jabareen of the Joint List of predominately Arab parties also thinks there is no rush to stem the trend. He told Al-Monitor, “It’s strange that the police fails over and over to find those responsible and bring them to justice. The result is a green light to these terrorists to go on with their actions. This failure increases the Arab public’s distrust of the police and its actions.”

According to Jabareen, the “price tag” organizations are fueled by the hatred and racism that have become an integral part of the political landscape in Israel, even on the prime minister's part.

Carmi Gillon, who served as Shin Bet director at the time of Prime Minister Yitzhak Rabin’s assassination in 1995, has been repeatedly warning in recent years against the dangers inherent in the lax handling of the “price tag” phenomenon. He argues that the Shin Bet could stop “price tag” activities in a short time if a decision were made to combat such attacks just like any other terrorist activity.

But, as mentioned previously, despite the dangers inherent in this phenomenon, the government of Israel does not appear inclined to declare war. Whereas in the previous two governments, then-Defense Minister Ehud Barak and Livni tried to advance actions that would staunch the phenomenon, other than issuing condemnations and pretty statements, Netanyahu’s right-wing government will continue unabatedly to bury its head in the sand.

Whereas Livni tried in 2013 to bring about the designation of “price tag” assailants as terrorists, in the Regev, Bennett and the newly appointed Justice Minister Ayelet Shaked government, no one would even dare raise such an idea.